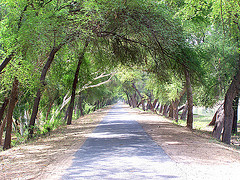 Believing in him: We must truly and sincerely believe in the Prophet,

, and all his teachings, and to let this belief reflect on all that one says and does. Allah The Almighty Says (what means):

● {So believe in Allah and His Messenger and the Quran which We have sent down. And Allah is acquainted with what you do.} [Quran 64:8]

●{O you who have believed, fear Allah and believe in His Messenger; He will [then] give you a double portion of His mercy and make for you a light by which you will walk and forgive you; and Allah is Forgiving and Merciful.} [Quran 57:28]
●{And whoever has not believed in Allah and His Messenger - then indeed, We have prepared for the disbelievers a Blaze.} [Quran 48:13]
The Prophet,

, said: “I have been ordered to fight people until they testify that there is none truly worthy of worship but Allah and believe in me and in that with which I have been sent.” [Muslim]
Believing in him,

, implies that we believe that he really is a prophet who was sent by Allah The Almighty as a messenger to humans and jinn. It also signifies that we believe in all the teachings he brought and informed us of. This belief must be coupled with pronounced testimony that he is the Messenger of Allah The Almighty. Then, both have to be accompanied by complying words and deeds so that one's belief in him,

, would become complete.
Obeying him: we mustbeware of disobeying the Prophet,

, said:“Whoever obeys me, obeys Allah; whoever disobeys me, disobeys Allah.” [Al-Bukhari]
It was also narrated on the authority of Abu Hurayrah, may Allah be pleased with him, that the Prophet,

, said: “I have been sent extremely close to the coming of the Hour with the sword so that Allah The Almighty would be worshipped Alone with no partner, and my sustenance is made under the head of my spear. Humiliation and disgrace will be placed on the person who disobeys me, and whoever imitates a people is [considered] one of them.”[Ahmad and Al-Bukhari, Shaykh Ibn Baaz - Hasan]
Following his footsteps: We must closely follow the Prophet,

, and take him as a role model in all affairs, following his guidance and submitting to his judgement. Allah The Almighty Says (what means):
●{Say, [O Muhammad], “If you should love Allah, then, follow me, [so] Allah will love you and forgive you your sins. And Allah is Forgiving and Merciful."}[Quran 3:31]
●{There has certainly been for you in the Messenger of Allah an excellent pattern for anyone whose hope is in Allah and the Last Day and [who] remembers Allah often.}[Quran 33:21]
●{And follow him that you may be guided.} [Quran 7:158]
Thus, it is obligatory for Muslims to follow the guidance of the Prophet,

, abide by his Sunnah and beware of disobeying him. The Prophet,

, said: “Whoever deviates from my Sunnah will not belong to me.” [Al-Bukhari]