Prophet Site > In the 3rd Dimension > 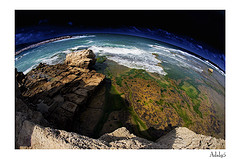 Statements of the Prophet Regarding Other Worlds

, to perceive worlds that cannot be perceived via ordinary human senses and to deal with them and describe them are counted among his miracles and supernatural abilities.

Allah The Almighty enabled His Messenger,

, to see, hear, and speak with angels and know about them. This ability helped the Prophet,

, to fulfill his task of receiving the revelation and conveying the message.
The Prophet,

, informed us about the attributes of angels. He also told us that he saw Jibreel (Gabriel), may Allah exalt his mention, in his real form with pearls and rubies falling from his 600 wings that blocked the horizons. Some angels appeared to the Prophet,

, in human shape, as Jibreel, may Allah exalt his mention, did when he came to ask him about Islam, Eemaan, Ihsaan and the signs of the Hour. The Messenger of Allah,

, also told us that Jibreel, may Allah exalt his mention, appeared in the image of the great Companion Dihyah Al-Kalbi, may Allah be pleased with him.
The Prophet,

, told us about the worship of the angels and their obedience to Allah The Almighty. In a Hadeeth on the authority of Abu Tharr, may Allah be pleased with him, the Prophet,

, told us that the angels washed Hanthalah ibn Abu ‘Aamir, may Allah be pleased with him, after he was killed during the Battle of Uhud only a day after his marriage. The whole story is narrated in Saheeh ibn Hibbaan.
The Prophet,

, also told us about the angels who were torturing two disobedient men as he passed by their graves. He said: “Both of them are being tortured, and they are not being tortured for major sins. One of them never prevented himself from being soiled by his urine, and the other would go about tale-carrying.” [Al-Bukhari]
With regards to the world of the Jinn and devils, the Prophet,

, told us about some of their attributes and qualities.
The Messenger of Allah,

, told us how devils try to distract men from prayer and how they dislike hearing the Athaan (the Call for prayer). In a Hadeeth on the authority of Abu Hurayrah, may Allah be pleased with him, the Prophet,

, said: “When the Athaan is pronounced, the devil takes to his heels and breaks wind with noise so as not to hear it. When the Athaan is finished, he returns. When the Iqaamah [immediate call to prayer] is pronounced, he again takes to his heels, and after it is finished, he returns again and whispers in the heart of the person [to distract him from prayer] and makes him remember things that he did not recall before the prayer, and says, `Remember this, and this?' and thus causes the person to forget how many Rak`ahs he has prayed.”[Al-Bukhari]
The Prophet,

, also said that devils enter through the gaps in the rows during prayer. In a Hadeeth on the authority of Anas, may Allah be pleased with him, the Prophet,

, said: “Stand close together in your rows, bring them near one another and stand neck to neck, for by Him in whose Hands my soul is, I see the devils entering through the gaps in the rows like small black sheep.”[An-Nasaa’i]
The Prophet,

, told us about Iblees’s (Satan’s) attempt to harm him. Abu Sa‘eed Al-Khudri, may Allah be pleased with him, said: “The Prophet

once performed the Morning Prayer and I was praying behind him. He got confused during recitation. When he finished, he said:‘If [only] you had seen me struggling with Satan! I stretched my hand and continued strangling him until I felt the coldness of his saliva between these two fingers [he pointed to his thumb and forefinger]. I intended to tie him to one of the pillars of the mosque so that all the little children of Al-Madeenah would play with him, but then I remembered the invocation of my brother Sulaymaan [Solomon].’” [Ahmad]
The Prophet,

, also met with a delegation of Jinn. He called them to Allah The Almighty and introduced Islam to them. Members of the delegation embraced Islam and became true Muslims. Historians of prophetic biography, such as Ibn Hajar

and others mentioned the names of some of the members of that delegation. ‘Abdullah ibn ‘Abbaas, may Allah be pleased with him, interpreted the Quranic verse where Allah The Almighty says (what means): {And [mention, O Muhammad], when We Directed to you a few of the Jinn, listening to the Quran. And when they attended it, they said, ‘Listen quietly’,}[Quran 46:29] saying, “They were nine of the Jinn (residents of Naseebeen) and the Prophet

sent them as emissaries to their people.” [At-Tabaraani]
The Prophet,

, explained the difference in nature between these creatures and men, saying: “The angels were created from light, Jinn were created from a smokeless flame of fire and Aadam, may Allah exalt his mention, was created from what was described to you.” [Muslim]
How did the Prophet,

, know about the attributes and nature of these creatures? There can be no doubt that the source of this knowledge was divine revelation. Allah The Almighty Says (what means): {It is not but a revelation revealed.}[Quran 53:4]