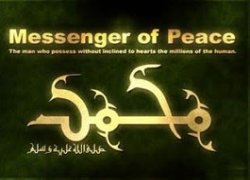 One of the greatest things that makes a Muslim proud is his belief and love of the Messenger,

(may Allah exalt his mention). Muslims believe in all the Messengers and the Prophets, may Allah exalt their mention, and do not distinguish between any of them -- except that our Prophet Muhammad,

, is the last and final messenger and prophet, and he is the best of them. He,

, is the first one for whom the gates of Paradise will be opened; belief in him,

, is the way to Paradise, as no one among those who were born after his prophethood, will be permitted entry (i.e. to Paradise) unless they had believed in him,

What can one say in response to the sarcastic caricatures published in the Jyllands Posten newspaper from Denmark, in its issue dated Tuesday, September 30th 2005? Whom was this newspaper mocking? It was mocking the greatest man ever created … the leader of all the Prophets,

. They featured evil, shameless images of him,

, as shameless as any disbeliever’s imagination can be.
Again, in the days of ‘Eed Al-Adh-Haa, to confirm their enmity, the Magazint newspaper from Norway repeated the same attack, as if they were trying to re-open the old wound, when they republished the images that were published in the first newspaper. Indeed, what Allah said about the disbelievers is true:
أَتَوَاصَوْا بِهِ بَلْ هُمْ قَوْمٌ طَاغُونَ
which means: “Did they suggest it to them (i.e. did the former disbelievers pass on these words to the Makkans so that they repeat the same expressions)? Rather, they [themselves] are a transgressing people.” [Ath-Thaariyaat: 53].
What can one say in response to this open declaration of enmity? Should we look to the other side, deafen our ears and keep our mouths shut, while our hearts are still beating?
I swear by The One Who honored Muhammad and exalted his rank! Our graves are dearer to us than being incapable of uttering the truth and defending our messenger,

. Indeed! My father, my grandfather and my honor are in sacrifice for Prophet Muhammad

.
The rank of the Prophet

: There is no phrase that can encompass all the features of greatness of this great Prophet,

; and there are not enough words to describe his greatness -- a greatness that overwhelmed all people in all ages, and was decreed to be eternal. It is this greatness that is instilled in all hearts, settled in all souls, felt by all the people and even the enemies of Islam.
The Prophet Muhammad,

, was the wisest person; the one with the most sound mind and opinion; the most generous -- whose alacrity in spending was said to be faster than a fast wind. He,

, used to spend like a person who never feared poverty due to spending. He,

, used to spend so generously, yet went to sleep hungry. He never saved anything, and used to instruct his companions, may Allah be pleased with them, to be generous, saying: “Spend (charitably) O Bilaal! And do not fear that Allah will decrease your provision (due to your spending)”.
He,

, was the most tolerant of all people and the kindest; if someone abused him, he would forgive him, and the harsher a person was, the more patient he,

, would become. He was most lenient and forgiving, especially when he had the upper hand and the power to retaliate.
He,

, was the most humble person -- he used to mix with the poor and the needy; he used to sit with the elderly and the widows; a young girl could take him by the hand to fulfill a need she had, and he,

, never wore anything to distinguish himself from his companions or appear in higher rank than them.
He was most lenient, and if he was given a choice between two matters, he chose the easiest, as long as it was not a form of disobedience to Allah. On the other hand, he,

, was the most firm with regards to fulfilling the obligations and supporting the truth. He was never enraged for a personal matter, but if one of the limits of Allah was transgressed, he,

, was the bravest person, one with the strongest will power and determination; he faced matters with steadfastness and patience, and would go through tough times and situations with firmness and perseverance.
He,

, never uttered abusive words; he was clear in his statements and chose his words carefully. He,

, was chaste, pure and the most honest and truthful of all people.
He,

, was the most just, even if the opponent was an enemy; penal laws would be imposed even against the people closest to him, and he even swore to this effect saying: “I swear by Allah! If Faatimah, the daughter of Muhammad were to steal, I would amputate her hand”.
He,

, was the most pure in his soul, the loftiest in spirit and the most knowledgeable about his Lord. He gave each one his due right -- he gave his Lord His right, his friend his due right, his wife her due right and his mission its due right.
He,

, was the most ascetic and the farthest from clinging to worldly material possessions; he ate whatever he was offered and never turned down any type of food and never requested and craved for what was not available, he slept on a straw mat.
He,

, was kindest towards the weak and most merciful to the miserable. His mercy included both humans and animals, and he,

, warned his companions against being harsh towards animals, as when he,

, said: “A woman was punished in Hell because of a cat which she had confined until it died. She did not give it to eat or to drink when it was confined, nor did she free it so that it might eat the vermin of the earth.”[Al-Bukhari and Muslim].
If the Prophet,

, had conferred no other favor upon humanity than conveying the message of guidance and the Qur’aan from his Lord to the people, then this would have been enough favor, for which the people could never do enough to express their gratitude or to reward him.
The above was but a glimpse from the light of prophethood, and a ray from the lamp of the bright manners of Muhammad,

; there is still a lot that one can say, which time does not permit.
Let them ask history: Has it ever witnessed a man greater than Muhammad,

, who was above any deficiency and the farthest from sin?
What Westerners say about the Prophet Muhammad

: Some of the famous, contemporary personalities who read the biography of the Messenger of Allah,

, could not help but admit that he was a master with excellent manners and an honorable character, and the following are some of their sayings:
Truthfulness of the Prophethood of Muhammad

, did not have anything to support the truthfulness of his message, except his praiseworthy biography and the eternal legislation he came with, then that would have been sufficient for the one who has a mind to ponder with and reflect.
The fact that the religion of the Prophet,

, remained established and prevailed throughout the long periods of history, and people entered into it in large numbers, is the greatest evidence proving that he,

, was truly a messenger from Allah.
Ibn Taymiyyah

said: “The early prophets have informed their people that one who falsely claims to be a prophet will not last, but for a short period. One of the Christian kings heard a man from the chiefs of the Christians cursing Muhammad

and accusing him of being a liar, so he gathered the scholars of the Christians and asked them how long would the one who falsely claims to be a prophet last. They informed him the news that was conveyed by the Prophets, that it would not be but a short number of years -- the longest would be around thirty years. Upon hearing this, he said to them: ‘The religion of Muhammad has lasted for more than five or six hundred years until now (up to his time) and it is prevailing and accepted and people still follow it, so how can this man be a liar?’ Thereafter, he beheaded the man who accused the Prophet

of being a liar.”
Defending the Prophet

: One of the rights of the Prophet,

, upon Muslims is that we love, honor and glorify him, follow his Sunnah and defend him. The age we live in is full of evil and afflictions befalling the Muslim nation, where we are seeing vicious attacks by some monks and priests against the Prophet,

. Despite the fact that their cursing and attacking him,

, enrages us, yet we see it as a sign of the nearness of our victory and their destruction.
The early Muslims used to see it as glad tidings regarding the defeat of their enemies when they cursed and attacked the Prophet,

said: “Allah will extract revenge for His Messenger from those who slander and attack him. Allah will make His religion prevalent and will expose the lies of the liars if the people cannot apply the penal law a slanderer deserves.”
Many trustworthy Muslim scholars have conveyed numerous accounts of their practical experiences in different cities in the Levant. They said: ‘The Muslims used besiege the Romans for long periods, like a month and more, until they (i.e. the Muslims) almost gave up on victory; no sooner than the dwellers of those Roman cities would start cursing the Prophet

that Allah facilitated victory and we conquered them. It was never delayed for more than a day or two after they started cursing and defaming the Prophet

. When we did win, we used to kill large numbers of them.’ People from Morocco also told me the same thing.”
Our duty in defending and supporting the Prophet

:
Allah says:
فَالَّذِينَ آمَنُوا بِهِ وَعَزَّرُوهُ وَنَصَرُوهُ وَاتَّبَعُوا النُّورَ الَّذِي أُنْزِلَ مَعَهُ أُولَئِكَ هُمُ الْمُفْلِحُونَ
which means: “So they who have believed in him, honored him, supported him and followed the light which was sent down with him — it is those who will be the successful.” [Al-A’raaf: 157]. Therefore, it is our duty to support the Prophet,

.
There are many things that an individual can do to support the Prophet,

. The following are some of them:
The duty of those working on the internet and website owners:
Finally, we ask Allah to support His religion and to humiliate the enemies of Islam.