Prophet Site > His Miracles > The Quran > 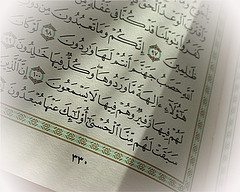 To make clear the lucid evidence and proofs of the truthfulness of the message of Prophet Muhammad,

, to all humankind and jinn is one of the wisest things that one can state in calling the People of the Book and disbelievers to Allah The Almighty. Undoubtedly, there are many clear proofs and signs of his prophethood and the universality of his message which were greater and more abundant than those of the other prophets, may Allah exalt their mention. All such proofs can be divided into two categories:

a-     Those which occurred in the past which we received knowledge of through reliable sources, such as, the miracles of Moosa (Moses) and ‘Eesa (Jesus), may Allah exalt their mention.
b-    Those which exist until today, such as the Quran and the knowledge and faith of the followers of the Prophet,

, which are signs of his prophethood. Also, this type includes his Sharee‘ah, the supernatural events which happen to his righteous followers from time to time by the permission of Allah The Almighty, the dominance of his religion through proofs and reasoning, and his traits which were mentioned in the revealed Books of previous prophets.
This is a very broad field of research that cannot be enumerated here. However, I will prove his prophethood and the universality of his message through the following two subject matters:
First: Miracles of the Glorious Quran
Second: His Tangible Miracles,

The First Subject: Miracles of the Glorious Quran
A miracle is a supernatural event that people, individually or collectively, cannot produce the like of. Allah The Almighty grants miracles to a person whom He chooses to carry the mission of prophethood in order to prove his truthfulness and the veracity of his message.
The Noble Quran is the revealed words of Allah The Almighty to Muhammad,

. It is the great miracle which will remain throughout all time for all people until the Day of Judgment. The Prophet,

, said: “Every Prophet was given miracles upon which people believed, and what I have been given is Divine Revelation [i.e. the Quran] which Allah has revealed to me. So I hope that my followers will outnumber the followers of the other prophets on the Day of Resurrection.” [Al-Bukhari and Muslim]
This Hadeeth does not mean that his miracles are only confined to the Quran and that he was not granted tangible miracles like the previous prophets, may Allah exalt their mention; rather, it means that the Quran is the greatest miracle that he was granted. Each prophet was given a special miracle to challenge the people to whom he was sent. Each prophet’s miracle was suitable to his people's circumstances. When magic was rampant among the people of Fir‘awn (Pharaoh), Moosa, may Allah exalt his mention, went to Fir‘awn and his people with a stick which was transformed into a serpent in the same way that the magicians would do; however, it devoured what the magicians threw. This same miracle did not occur to any other prophet.
When doctors held an extremely notable status in society, ‘Eesa, may Allah exalt his mention, did things such as, reviving the dead and healing the blind and the lepers, which bewildered the doctors. All his actions were in the field of their specialty, but their ability did not reach them.
As the Arabs were the most eloquent and talented people ever in terms of speech, Allah The Almighty made the Noble Quran the miracle of our Prophet Muhammad,

. Allah The Almighty Says (what means): {Falsehood cannot approach it from before it or from behind it; [it is] a revelation from a [Lord who is] Wise and Praiseworthy.} [Quran 41:42]
Moreover, the miracle of the Noble Quran is distinguished from other miracles because it is an ongoing miracle that lasts throughout all time. However, the proofs of other prophets, may Allah exalt their mention, ended once they died and remained only in their message.
The Quran, on the other hand, remains a continuous proof. It is as if the person listens to it being recited by the Prophet,

himself. Due to the continuation of this eloquent proof, the Prophet,

, said: “I hope that my followers will outnumber the followers of the other prophets on the Day of Resurrection.” [Al-Bukhari and Muslim]
The Noble Quran is clear, miraculous evidence from several aspects: its wording, composition, eloquence in the meaning of the words, its meanings in terms of its orders, its meanings in terms of its informing about Allah The Almighty, His Names, Attributes, the angels and other aspects that numerous scholars have mentioned according to the knowledge that Allah The Almighty has granted them.
In the second part of this article we will briefly mention some aspects as examples, which are by no means inclusive.