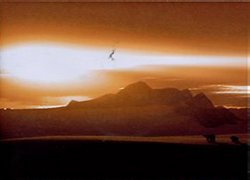 A descendent of Yoosuf ibn Ya’qoob (Joseph, the son of Jacob), may Allah exalt their mention, as corroborated by At-Tabari and Ibn Sa’d

‘Abdullaah ibn Salaam ibn Al-Haarith Al-Israa’eeli Al-Ansaari was known as Abu Yoosuf. Not only was he affiliated to the Ansaar (supporters of Madeenah), it is also said that he was an ally of the Qawaaqilah from the Banu ‘Awf ibn Al-Khazraj. Before he embraced Islam subsequent to the arrival of the Prophet,

reports that “the name of ‘Abdullaah ibn Salaam was Al-Husayn; the Prophet

I recognized his [physical] description, name, advent, characteristics and what we expected him to be like [as congruent with the prophecy in the Torah]. However, I had concealed that and kept silent until he

entered Madeenah [and] stayed in Qubaa’ among the tribe of ‘Amr ibn ‘Awf. A man announced his arrival and at the time, I was atop a palm tree, working, and my paternal aunt, Khaalidah bint Al-Haarith, was sitting underneath. When I heard the news of the coming of the Messenger of Allah

I exclaimed, ‘Allahu Akbar (Allah is Great).’ Upon hearing [this], my aunt cried, ‘If you had heard of the advent of [our Prophet] Moosa ibn ‘Imraan, could you have said more than that?!’ I said to her, ‘O aunt, I swear by Allah, he is the brother of Moosa ibn ‘Imraan, for he follows his religion and was sent with the same message as he was.’ She asked, ‘O nephew, is he the prophet whose advent we were foretold close to the Hour [when Judgment Day will come]?’ I said, ‘Yes.’ She said, ‘Fair enough, it is him, then.”
Subsequently, ‘Abdullaah ibn Salaam, may Allah be pleased with him, went to the Prophet,

, and said, “I shall ask you about three things that are unknown to everyone save a Prophet: what is the earliest portent of the Hour? What will be the first food of the people of Paradise? Also, what causes a child to resemble his [or her] father or mother?” The Prophet,

, remarked: “Jibreel (Gabriel) has already informed me about these things.”
‘Abdullaah, may Allah be pleased with him, wondered, “[Did you say] Jibreel?” When the Prophet,

, replied in the affirmative, he commented, “That is the enemy of the Jews from among the angels.” The Prophet,

, then recited the verse where Allah The Almighty Says (what means): {Say, "Whoever is an enemy to Gabriel - it is [none but] he who has brought the Quran down upon your heart, [O Muhammad], by Permission of Allah, confirming that which was before it and as guidance and good tidings for the believers."} [Quran 2:97]
He,

, went on to answer the questions of ‘Abdullaah ibn Salaam, may Allah be pleased with him, saying: “The first [major] sign of the [imminence of the] Hour is a fire that will drive the people from the east to the west. As for the first food for the people of Paradise, it will be the extra lobe of the liver of a whale. [Regarding your third question], if the man’s fluid precedes that of the woman, then the child resembles his [or her] father; and if the woman’s discharge comes first, he [or she] takes after his [or her] mother.” Upon hearing this, ‘Abdullaah, may Allah be pleased with him, declared, “I testify that there is none worthy of worship except Allah and that you are [His] Messenger.”
The impact of the Messenger of Allah,

, on his growth [as a Muslim]
As narrated above, the great Companion ‘Abdullaah ibn Salaam, may Allah be pleased with him, converted to Islam quite early. He relates his first encounter with the Prophet,

, after he came to Madeenah. When ‘Abdullaah, may Allah be pleased with him, got wind of his arrival and that people had gathered to receive him, he walked with them, carrying the fruits that he picked from his farm. When he looked at the Prophet,

, he instantly knew that his face was not one of a liar. Let us leave him to relate the incident in his own words:
“When the Prophet

reached Madeenah, people rushed towards him; it was announced thrice that the Messenger of Allah had arrived. Hence, I came along with the people to take a look at him. When I was able to make out his face clearly, I realized it was not the countenance of a liar. The first words I heard him utter were: ‘O people, greet each other often with salutations of peace, serve [each other] food, maintain kinship ties and pray at night when others are asleep, so that you will enter Paradise with peace.’ I drew near to him and testified that none is worthy of worship except Allah and that Muhammad

is the Messenger of Allah. Then, the Prophet

turned to me and inquired, ‘What is your name?’ I replied, ‘Al-Husayn ibn Salaam.’ The Messenger of Allah

said: ‘Rather, you are [now] ‘Abdullaah ibn Salaam.’ I responded, ‘Yes, I shall [now] be ‘Abdullaah ibn Salaam. I swear by the One Who has sent you with the truth, I would not like to have any other name after today.’”
Distinct aspects of his personality
The man previously known as Al-Husayn ibn Salaam, may Allah be pleased with him, was famous for his piety, righteousness, steadfastness and veracity. He led a quiet, yet meaningful and constructive, life. He divided his time into three parts, dedicating each to either of the following: doing Da‘wah (inviting others to Islam) and performing acts of worship; tending to his garden by pruning and pollinating the trees; and, as people would describe, [studying] the Torah for getting insight into its religion. Whenever he would be engrossed in the latter task, he would focus on the divine predictions related to the emergence of a Prophet in Makkah who would come to complement and conclude the revealed messages of previous Prophets.
Incidents with the Messenger of Allah,

said, “I was sitting in the mosque of Madeenah when a man whose face exhibited signs of humbleness came and offered two brief Rak‘ah (units of prayer). People commented, ‘This is a man from the people of Paradise.’ When he left, I followed him until he entered his house and I went in, too, [after seeking his permission]. I spoke with him for a while; then, when he felt at ease [with me], I mentioned, ‘When you entered the mosque, people said such-and-such about you.’ He said, ‘Exalted is Allah! No one should say what he has no knowledge of. I will tell you why they made such a remark. I had a dream during the life of the Messenger of Allah

which I narrated to him. In it, I saw that I was in a green garden and there was an iron pole in its middle that was rooted in the earth; its upper end extended high in the sky and on its top was a handle. I was told to ascend the pole, so I did, until I grasped the handle and was then asked to hold on [to it]. I awoke from that dream [still feeling] the handle in my hand. In the morning, I went to the Messenger of Allah

and told him about the vision, so he said, ‘As for the garden, it represents Islam, and the pole, the pillar of Islam; the handle symbolizes the most trustworthy handhold. [Thus, the dream indicates that] you shall remain Muslim until you die.’’ This Companion [that I talked to] was ‘Abdullaah ibn Salaam.”
On another occasion, Sa‘d ibn Abi Waqaas, may Allah be pleased with him, recounted that a bowl of food was brought to the Prophet,

. After he ate from it, there was some left over, so the Messenger of Allah,

, said: “A man from the people of Paradise will come down this road and share this remaining food with me.” It so happened that ‘Abdullaah ibn Salaam, may Allah be pleased with him, was that person.
Some incidents with the Companions:
‘Abdullaah ibn Salaam once counseled ‘Ali ibn Abi Taalib, may Allah be pleased with them, not to move to Iraq, saying, “Stick to the pulpit of the Messenger of Allah

[in Madeenah], for if you leave it, you may very well never see it again.” The latter observed about his advice-giver: “He is a righteous man from among us.”
Al-Mugheerah ibn ‘Abdul-Rahmaan

relates: “Salmaan Al-Faarisi met ‘Abdullaah ibn Salaam and said to him, ‘If you die before me, then tell me of what you would be experiencing. If I go before you, I will let you know.’ It so happened that Salmaan died first; so, when ‘Abdullaah saw him in his sleep, he asked, ‘How are you, Abu ‘Abdullaah?’ [Salmaan] replied, ‘[I am] fine.’ He then inquired, ‘Which deed did you find [your] best [asset]?’ He said, ‘I found reliance on Allah to be unmatched.’”
The various Hadeeth that he narrated from the Prophet,

reported that ‘Abdullaah ibn Salaam, may Allah be pleased with him, heard the Messenger of Allah,

, saying on the pulpit on a Friday: “What is the harm in any of you having two garments if he can afford them: [one] for Friday [prayers], in addition to two outfits for his daily work?”
It was also narrated on the authority of ‘Abdullaah ibn Salaam, may Allah be pleased with him, that: “A man came to the Prophet

and told him that the Jewish population of a certain tribe had embraced Islam; however, they suffered from starvation, so he feared that they would renounce Islam. Hence, the Messenger of Allah

requested [charity from] those of the attendees who were financially capable. A Jewish man said that he would provide them with such-and-such things from the orchard of so-and-so, for a delayed payment of three hundred dinars. The Messenger of Allah

accepted the offer, including the amount and allotted time for payment, but ruled out the source, meaning, that specific land.”
A few words from the man himself
‘Abdullaah ibn Salaam forbade the murder of ‘Uthmaan, may Allah be pleased with them, saying, “O people, do not draw the sword of Allah against your own people, for if you do so, you will never [again] sheathe it. Woe unto you! Your kingdom is [currently] in order by [discipline through] a stick, but if you kill him, it may never again be maintained, except by the sword. May woe betide you! Your city is now surrounded by angels, but if you take his life, they will abandon it.”
The qualities of ‘Abdullaah ibn Salaam
Mu‘aath ibn Jabal, may Allah be pleased with him, was reported to have said, “I heard the Prophet

foretelling that ‘Abdullaah ibn Salaam will be the tenth of ten people [promised to enter] in Paradise.” Also, when he ordered his student Yazeed ibn ‘Ameerah As-Saksaki

, said: “Three kinds of people will get a double reward: an individual from the People of the Book who believed in his Prophet and [then] in Muhammad

and a slave who fulfilled the rights of Allah and the rights of his masters. Also, a man who has a bondwoman with whom he has sexual relations; he teaches her etiquette and educates her well, then sets her free and marries her; he will get two rewards.” [Al-Bukhari]
Furthermore, it is reported by Muslim