Prophet Site > His Miracles > The Sunnah > 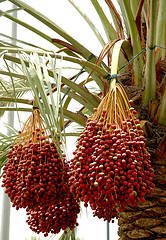 There are several practices related to the birth of a newborn infant in Islam. One such Sunnah (Prophetic tradition) is the practice of placing a tiny piece of a well-chewed date in the mouth of a newborn baby. This practice, which is called Tahneek, is a tradition of Prophet Muhammad,

, who customarily used to do this for the newborn infants brought to him. Amazingly, hundreds of years after the origin of the Islamic custom, modern science is only recently discovering the medical and physiological benefits of following the Sunnah. According to recent medical reports, placing a sweet-tasting substance inside the mouth of a newborn baby drastically reduces the sensation of pain and reduces the heart rate.

Reports published in the British Medical Journal (No 6993, 10 June 1995), categorically prove the benefits of giving a new-born child sugar, in order to reduce the ill effects of painful hospital procedures like pricking the heel to obtain a blood sample for tests or before surgical procedures like circumcision.
The study, entitled `The Analgesic (pain killing) Effect of Sucrose in Full Term Infants: A Randomised Controlled Trial', was conducted by researchers Nora Haouari, Christopher Wood, Gillian Griffiths and Malcolm Levene in the post-natal ward in the Leeds General Infirmary in England.
60 healthy infants of gestational age 37-42 weeks and postnatal age of 1-6 days, were randomized to receive 2ml of one of the four solutions: 12.5% sucrose, 25% sucrose, 50% sucrose, and sterile water (control).
The first group of 30 babies received sugar syrup before a routine blood test (heel pricking, which is usually painful) done to detect jaundice. The other 30 babies were given only sterile water as a control group.
Placing 2ml of a 25% or 50% sucrose solution on the tongue before pricking the heel significantly reduced the crying time, compared to babies who were given plain water. It was also observed that their heart rate returned to normal more quickly. The stronger sugar solution had the greater effect, with the crying response being reduced further with increasing concentration of sucrose. From this we may conclude that sucrose (sugar) placed on the tongue may be a useful and safe form of analgesia for use with newborn infants.
Blass and Hoffmeyer also showed that 12% solution of inter-oral sucrose significantly reduced the duration of crying in new-born babies subjected to heel pricking or circumcision. This study was reported in The Independent newspaper (Friday 9 June 1995) as well as in the British Medical Journal article.
Prophetic narrations on Tahneek
The most authentic collections of the practice and narrations of the Prophet Muhammad,

, are the two Saheeh collections of Al-Bukhari and Muslim

. The following narration is recorded in them:
Abu Buradah

reported from Abu Moosa, may Allah be pleased with him, who said, `I had a new-born baby; I took him to the Prophet

who named him Ibrahim. The Prophet

chewed a date then he took it and rubbed the inside of the baby's mouth with it.'
There are many other reported incidents like this one.
Let us take a look at the chemical composition of dates that make them particularly beneficial:
·        It contains a very high percentage of sugar (70-80%); It has both fructose and glucose which have high calorific values, it is easily and quickly digestible, and very helpful to the brain.
·        It contains 2.2% protein
·        Vitamins like vitamin A, vitamins B1, B2 and nicotinic acid (against Pellagra)
·        It has traces of minerals needed for the body such as potassium, sodium, calcium, iron, manganese, copper. Potassium which is found in a high percentage in dates, plays an important role in preventing haemorrhage and excessive bleeding during birth and surgical procedures like circumcision.
Benefits of breaking the fast with dates
The Prophet,

, preferred to break his fast in Ramadan and during other voluntary fasts with dates. The great nutritional benefit to be obtained from dates is also mentioned in the Quran (what means): {"And shake towards you the trunk of the palm-tree and it will drop on you fresh ripe dates. So eat and drink and be comforted."} (Quran 19: 25)
Allah The Almighty disclosed these benefits to Maryam, the mother of 'Eesa, may Allah exalt his mention, at the time of his birth in order to make the process of childbirth easy and comfortable. The knowledge contained in the Noble Quran and Purified Sunnah is indeed a blessing that brings about numerous benefits …if only more people realized it and followed these sources of guidance!