Prophet Site > Perceptions of the Prophet > Prophet Muhammad in other scriptures > 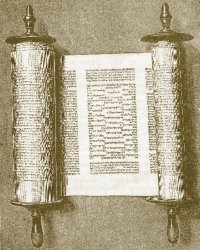 in the Old Testament (Tawraah)

Allah Almighty Says in the Quran (what means): "Those who follow the Messenger, the unlettered prophet, whom they find written in what they have of the Torah and the Gospel…" [Quran 7: 157]

prophesized in the book of Deuteronomy:

"I will raise them up a Prophet from among their brethren, like unto thee, and I will put my words in his mouth; and he shall speak unto them all that I shall command him."

If these two are the only criteria for this prophecy to be fulfilled, then all the Prophets of the Bible who came after

Moses such as Solomon, Isaiah, Ezekiel, Daniel, Hosea, Joel, Malachi, John the Baptist, etc. (may Allah exalt their mention) will fulfill this prophecy since all were Jews as well as prophets.

However, it is Prophet Muhammad

who is like Moses, may Allah exalt his mention:

i) Both had a father and a mother, while Jesus (may Allah exalt his mention) was born miraculously without any male intervention.

ii) Both were married and had children. Jesus (may Allah exalt his mention) according to the Bible did not marry nor had children.

Words in the mouth:
Prophet Muhammad

was unlettered and whatever revelations he received from Allah Almighty, he

repeated them verbatim.
"I will raise them up a Prophet from among their brethren, like unto thee, and will put my words in his mouth; and he shall speak unto them all that I shall command him." [Deuteronomy 18:18]
iv) Both besides being Prophets were also kings i.e. they could inflict capital punishment. Jesus (may Allah exalt his mention) said: "My kingdom is not of this world." (John 18:36).
v) Both were accepted as Prophets by their people in their lifetime but Jesus (may Allah exalt his mention) was rejected by his people. John chapter 1 verse 11 states, "He came unto his own, but his own received him not.”
iv) Both brought new laws and new regulations for their people. Jesus (may Allah exalt his mention) according to the Bible did not bring any new laws. (Mathew 5:17-18).
2.      It is Mentioned in the book of Deuteronomy, chapter 18:19
“And it shall come to pass, that whosoever will not harken unto my words which he shall speak in my name, I will require it of him.”
3.     Muhammad

mentioned by name in the old testament:
Prophet Muhammad

is mentioned by name in the Song of Solomon chapter 5 verse 16:
"Hikko Mamittakim we kullo Muhammadim Zehdoodeh wa Zehraee Bayna Jerusalem."
"His mouth is most sweet: yea, he is altogether lovely. This is my beloved, and this is my friend, O daughters of Jerusalem.”
In the Hebrew language im is added for respect. Similarly im is added after the name of Prophet Muhammad

to make it Muhammadim. In English translation they have even translated the name of Prophet Muhammad

as "altogether lovely", but in the Old Testament in Hebrew, the name of Prophet Muhammad

is yet present.
Prophet Muhammad

in the New Testament (Injeel):
Allah Almighty Says (what means): Al-Quran Chapter 61 Verse 6:
"And [mention] when Jesus, the son of Mary, said, 'O children of Israel, indeed I am the messenger of Allah to you confirming what came before me of the Torah and bringing good tidings of a messenger to come after me, whose name is Ahmad.' But when he came to them with clear evidences, they said, 'This is obvious magic'." [Quran 61: 6]
All the prophecies mentioned in the Old Testament regarding Muhammad

besides applying to the Jews also hold good for the Christians.
1.     John chapter 14, verse 16:
“And I will pray the Father, and he shall give you another Comforter, that he may abide with you forever.”
2.     Gospel of John chapter 15, verse 26:
"But when the Comforter is come, whom I will send unto you from the Father, even the Spirit of truth, whichproceeded from the Father, he shall testify of me.”
3.     Gospel of John chapter 16, verse 7:
"Nevertheless I tell you the truth; it is expedient for you that I go away: for if I go not away, the Comforter will not come unto you; but if I depart, I will send him unto you".
"Ahmad" or "Muhammad" meaning "the one who praises" or "the praised one" is almost the translation of the Greek word Periclytos. In the Gospel of John 14:16, 15:26, and 16:7. The word 'Comforter' is used in the English translation for the Greek word Paracletos which means advocate or a kind friend rather than a comforter.
Paracletos is the warped reading for Periclytos. Jesus (may Allah exalt his mention) actually prophesized Ahmad by name. Even the Greek word Paraclete refers to the Prophet

"I have yet many things to say unto you, but ye cannot bear them now. Howbeit when he, the Spirit of truth iscome, he will guide you unto all truth: for he shall not speak of himself; but whatsoever he shall hear, that shall he speak: and he will shew you things to come. He shall glorify me".
The Sprit of Truth, spoken about in this prophecy refers to none other than Prophet Muhammad

.
Note: All quotations of the Bible are taken from the King James Version.