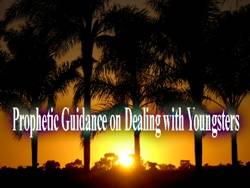 Prophetic Guidance on Dealing with Youngsters - I

, is the most perfect man ever. He taught people while taking into consideration their way of thinking and their degree of faith. His way of teaching is best described by Al-Hakam ibn Mu'awiyah, may Allah be pleased with him, who was a mature man (when this incident occurred). Ibn Mu'awiyah, may Allah be pleased with him, said, after committing an error while praying, "I have never before seen an instructor who gave better instruction than he, may my father and mother be sacrificed for him. He neither remonstrated with me, nor beat me, nor abused me." [Muslim]

If this was the Prophet's way of treating and teaching adults, surely the children were favored by more of his good guidance and leniency of treatment. In that sense, the stepson of the Prophet, sallallaahu 'alayhi wasallam, Umar ibn Abu Salamah, may Allah be pleased with them both, reported, "I was a boyunder the care of the Prophet

and my hand would wander about the dish. He said to me: "O boy, mention the name of Allah (sayBismillaah before you start eating), eat with your right hand and eat from what is near to you." I always followed this way of eating after this incident." [Al-Bukhari and Muslim].
It is thus clear that the most of honorable of people, the Prophet,

, did not disdain to eat with his stepson like many people do. Even when the boy made a mistake, he hastened to teach him the right way to eat in a very gentle manner. The Prophet, sallallaahu 'alayhi wasallam, was not rough with him, neither did he rebuke him nor dismiss him from the house. Consequently, this manner of teaching had a great effect on the boy, who said, "I always followed this way of eating", as well as on the Muslim nation as a whole.
What do you think would have happened if the Prophet,

, had rebuked the boy or dismissed him, or cursed him (supplicated Allah The Almighty to cut his hand, for example) like some parents may have done in that situation? Would the boy have gained this benefit of learning the etiquette of eating? Would the nation have gained any benefit from (learning of ) such maltreatment?
Moreover, the Prophet,

, joked with boys, made them happy, and gave them nicknames in their childhood. This is illustrated in the Hadeeth (narration) narrated by Abu Tayyah, on the authority of Anas ibn Malik, may Allah be pleased with him, who said, "The Prophet sallallaahu 'alayhi wasallam, was the best of all the people in character. I had a brother called Abu 'Umayr, who, I think, had been newly weaned. Whenever he (that child) was brought to the Prophet

he used to say: "O Abu 'Umayr! What did Al-Nughayr (the nightingale) do?" It was a nightingale with which he used to play."
The question is: where do some of today's educators stand in comparison to this Prophetic guidance in dealing with young people with compassion, delighting them with jokes and gifts, or at least speaking a good word that opens their eyes and ears, and enables  them to benefit from the knowledge and behavior of their educators? Where are the educators who call youngsters by their Kunyah (patronymic nickname), which makes them pleased? On the contrary, a few educators intentionally give the children under their charge nicknames that they deeply resent. It is worth mentioning that as long as these children are called by these hurtful names, the sin of offending them will return to those who invented the names in the first place.
Another aspect of the Prophet’s care for the young is that he guided parents and guardians to teach their children Salah (prayers), and familiarize them with it, so that they would continue performing Salah as they had been taught in their childhood.
Prophetic Guidance on Dealing with Youngsters - II
Prophetic Guidance on Dealing with Youngsters - III