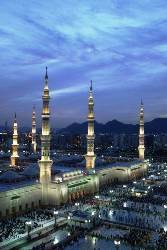 Another aspect of the Prophet’s care for the young is that he guided parents and guardians to teach their children Salah (prayers), and familiarize them with it, so that they would continue performing Salah as they had been taught in their childhood.
‘Amr ibn Shu'aib

on behalf of his father, on the authority of his grandfather, narrated that the Prophet,

, said:“Command your children to perform Salah at the age of seven, and beat them for (neglecting) it at the age of ten and separate them in their beds.” [Ahmad]

In this Hadeeth, the Prophet,

, addresses the parents or the guardians, not the children, as the former are adults and responsible for their actions, whichever of them disobeys is a sinner and subject to punishment. It should be noted that the Prophet,

, did not distinguish between prayers, i.e. the young should be taught and ordered to perform all the five prayers, while taking care to accustom boys to performing it in the Masjid. This was emphasized by Shaykh al-Islam Ibn Taymiyyah

who said, "Every obeyed person (someone with authority over children) should order those who obey him (those under his authority), even if he has not reached adulthood, to perform Salah, and whoever has a boy or a young orphan and does not order him to pray, is disobedient to Allah and his Messenger, and should be severely rebuked, as he is subject to the punishment of Allah The Almighty."

In this respect, some parents complain that their adult sons do not attend even the Jum'ah (Friday) prayers in the Masjid. In many cases, the parents themselves are to blame for this, as they neglected teaching their sons to perform Salah while they were young, so when these children grew older, it was not easy for them to perform prayers in the Masjid. Thus, the corruption of sons is usually caused by the parents themselves. This corruption renders the son of no use, neither for himself, nor for his old parents. Here we recall the words of such a son who blamed his father, saying, "O father, you had been undutiful to me when I was young, so I am undutiful to you now that you are old. And you ruined me when I was a child, so I have neglected you when you are old. As you sow, so will you reap."

, allowed children to be present in the Masjids, and sometimes even interrupted a sermon for them.

Buraydah, may Allah be pleased with him, said,

While the Prophet, sallallaahu  'alayhi wa sallam, was on the Minbar (pulpit) giving us a speech, he saw (his grandsons) Al-Hasan and Al-Husayn (who were small children) coming in wearing red shirts, walking and falling over every now and then. The Prophet, sallallaahu  'alayhi wa sallam, came down (from the pulpit), carried the children and seated them on his lap, and then he said: "Verily, Allah (The Almighty) speaks the truth (which means): {Your wealth and your children are only a temptation…} [Quran: 64, 15] And he added: "I saw these two children walking and tumbling, I felt so impatient that I interrupted my speech in order to help them up." [An-Nasaa'i].

Thus, it is clear that preventing children from attending Masjids is not from the guidance of the Prophet, sallallaahu  'alayhi wa sallam, as he, sallallaahu  'alayhi wa sallam, brought them to the Masjid and acknowledged their presence with their parents. Although there is no doubt that their attendance often distracts and annoys the worshippers because of their crying or playing, the Prophet, sallallaahu  'alayhi wa sallam, overlooked this, as these children reap the benefits of attending the Masjid. These benefits include familiarizing the children with Masjids, being accustomed to attending prayers and sermons, and praying. The guardian should be keen on bringing his children to the Masjids, while doing his best to reduce and limit their noise, by either standing next to them in the row during the prayers, or closely monitoring them after it. By doing this, the recurrent complaints in the Masjids due to  the noise of the children and the negligence of the parents will no longer pose a problem.