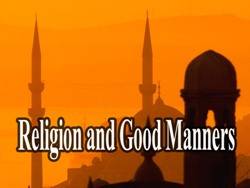 Religion and Good Manners - I

Most people do not look at your level of faith or your acts of worship; rather, they consider your manners. If your manners are virtuous, people will benefit from your faith and knowledge and emulate your manner of worship and manners.  If your manners do not appeal to them due to your lack of good morals, then they will pay no attention to whatever knowledge you have. Thus, abiding by good manners is imperative for all believers.

Good morals have a lofty position in Islam. It is enough that Allah The Almighty praised his Prophet,

, in the Holy Quran by saying (what means): {And indeed, you are of a great moral character.} [Quran 68:4]. The morality mentioned in this verse was interpreted by Ibn 'Abbaas, may Allah be pleased with him, and Mujahid

as ‘the religion’. It is as if Allah The Almighty is saying to his Prophet,

: (you are upon a great religion, in which all good manners are included). In this sense, when Sa'ad ibn Hishaam

asked the Mother of Believers, 'Aa'ishah, may Allah be pleased with her, about the character of the Prophet,

, she answered, "His manners were the Quran" -- meaning that the Prophet,

, was an embodiment of the teachings of the Quran. Consequently, after hearing this short expressive answer from 'Aa'ishah, may Allah be pleased with her, Sa'ad ibn Hishaam

said, "This answer sufficed for me, so much so that I was about to leave without asking her any more questions." [Al-Bukhari and Muslim]
Thus, the lofty position occupied by good morals in the Quran and the religion shows how much this great religion pays attention to the issue of good manners.
Allah The Almighty shows us the fundamental premise of good manners by Saying (what means: ({Take what is given freely, enjoin what is good, and turn away from the ignorant}[Quran 7:199]. Scholars say that none of the Quranic verses apply comprehensively to all good deeds like this verse. It means to maintain good relations with those who dispute with you, to give to those who deprive you, and to forgive those who ill-treat you. In other words, this verse guided the Prophet,

, to forgive people and accept their apology, to treat them with leniency, and not to probe or interfere in their personal affairs.
The morals included within this verse have been emphasized by other verses in the Quran. For instance, the Saying of Allah The Almighty (which means): {Take what is given freely}guided the Prophet,

, was the best of people in character. Anas ibn Maalik, may Allah be pleased with him, reported, "I never felt any piece of velvet or silk softer than the palm of the Prophet

nor did I smell any fragrance more pleasant than the smell of the Messenger of Allah,

, further defined righteousness as morality, for righteousness is the way to achieving tranquility of heart and peace of mind. It is thus clear that morality is at the heart of religion, as it is the main purpose of Sharee'ah (Islamic law), and the means by which staunch faith is achieved.