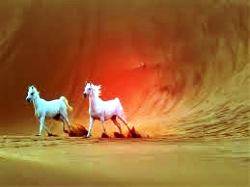 His Military Commanders from Al-Ansaar -II

8. Abu Qataadah, may Allah be pleased with him:

He was appointed as a leader for a platoon dispatched to Hadrah, in Sha'baan, 8 A.H. He is Abu Qataadah ibn Rib'iyy Al-Ansaari. It is known that his name is Al-Haarith, but Al-Waaqidi, Ibn Al-Qaddaah and Ibn Al-Kalbi argued that his name is An-Nu'maan, and it is said that his name is Amr. There is some difference over his witnessing the Battle of Badr, but he did witness Uhud and the battles afterwards. He was called “the horseman of the Prophet”

9. Muhammad ibn Maslamah, may Allah be pleased with him:

On the tenth of Muharram, 6 A.H, the Prophet

dispatched him at the head of thirty horsemen to Al-Qurt'ah.

His nickname is Abu Zayd. He witnessed the two 'Aqabahs, and he also witnessed Badr, Uhud and all the battles of the Prophet, sallallahu ‘alayhi wa sallam. He carried the flag of Bani Salamah on the day of the Conquest. He was afflicted on the Day of Uhud with nine wounds. In the Battle of Badr, it is narrated that he threw a stone between the two parties and said, "I will not escape unless this stone escapes." He died in the time of 'Uthmaan, may Allah be pleased with him, or during the Caliphate of 'Umar, may Allah be pleased with him, according to other opinions.

11. Saalim ibn 'Umayr Al-Ansaari, may Allah be pleased with him:

appointed him as a leader of a platoon to Abu 'Afak the Jew, who was instigating people against the Prophet

. He witnessed Al-Aqabah, Badr, Uhud, and all the battles of the Prophet

12. Aasim ibn Thaabit ibn Abi Al-Aqlah, may Allah be pleased with him:

He is the grandfather of Aasim ibn 'Umar ibn Al-Khattaab from the side of his mother and was one of the first forerunners from the Ansaar. He witnessed Badr, and protected the rear of the army. The Prophet

sent him as a head of a scouting platoon. They moved until they reached an area between Makkah and Usfaan, but the people of Bani Lahyaan followed them and killed Aasim and seven of his companions, and captured the other three and sold them.The Quraysh sent some people to take the head of Aasim, but Allah The Almighty protected his body by sending bees to surround him. At night, Allah The Almighty sent a flood that carried his body away.

13. Abdullaah ibn 'Ateek Al-Ansaari Al-Khazraji, may Allah be pleased with him:

Abu 'Umar said, "I think he witnessed Badr," but they agreed that he witnessed Uhud, and he is the one who killed Abu Raafi' ibn Abi Al-Haqeeqi with his hands. When he killed him, he fell from the stairs, due to his weak eyesight, and his legs were almost broken. When he went to the Prophet, he

touched his leg and it was cured and he said it was as if he did not ever have any cause to complain of it. He died a martyr in Al-Yamaamah, 12 A.H, and it is said that he witnessed Siffeen.

His Military Commanders from Al-Ansaar -I