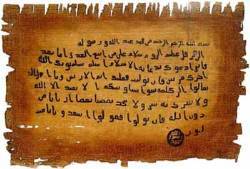 When the Messenger of Allah

dispatched a letter to Heraclius, the Roman king, inviting him to Islam, the latter summoned Abu Sufyaan and his group, as well as the Muslim delegation led by Dihyah, may Allah be pleased with him, to his court of eminent dignitaries. He also invited his interpreter, through whom he asked the Arab attendees, “Who amongst you is the closest relative to the man who claims to be a prophet?”

Abu Sufyaan replied, “I am the nearest in family relations amongst these people.” So, Heraclius ordered, “Bring [that man] close to me and make his companions stand behind him.” He then instructed his interpreter, “Tell [the other group] that I will ask him [i.e., Abu Sufyaan] about this man [Muhammad]; and, if he lies to me, they should refute him.” The two men then had the following conversation:

Heraclius: How is his lineage among your people?

Abu Sufyaan: He belongs to a noble family amongst us.

Heraclius: Has anybody from your land ever claimed the same [i.e., Prophethood] before him?

Heraclius: Was any of his ancestors a king?

Heraclius: Do the aristocrats or the poor [mostly] follow him?

Abu Sufyaan: It is the lower class that obeys him.

Heraclius: Are his followers increasing or decreasing [by the day]?

Abu Sufyaan: They are multiplying.

Heraclius: Does any convert to his religion become disaffected and renounce his [or her] faith afterwards?

Heraclius: Had you ever accused him of telling lies before his claim [of Prophethood]?

Heraclius: Does he break his promises?

Abu Sufyaan: No; [but] we are in a truce with him and do not know his potential actions.

Heraclius: Have you ever engaged him in battle?

Heraclius: What was the outcome of the wars?

Abu Sufyaan: Sometimes he was victorious and, at other times, we were.

Heraclius: What does he command you to do?

Abu Sufyaan: He tells us to worship Allah alone and not to associate partners with Him, and to disavow everything our ancestors proclaimed. In addition, he orders us to pray, be honest and chaste, and to maintain the ties of kinship.

Heraclius then told [the interpreter to say to] Abu Sufyaan:

“I asked you about his family background and you mentioned that he belonged to a very noble tribe. In fact, all messengers have esteemed lineage among their people. I questioned if anyone else from amongst you had also laid claim to such a thing [as prophethood], and your reply was in the negative. If it had been affirmative, I would have thought that this man was imitating the previous individual’s statement. I then asked you if any of his forefathers was a king and you said that was not the case. If it had been, I would have assumed this man just wanted to regain his ancestral kingdom. I further asked whether he was ever accused of telling lies before and your reply was in the negative. So, I wondered: how could a person who never fibbed about others, possibly tell a lie about Allah?

I then asked you whether it was the rich who followed him or the poor, and you answered that the latter did. Actually, all the messengers have been [mostly] followed by this very class of people. Then, I inquired if the number of his followers was increasing or decreasing, and you said it was going up; indeed, this is customary of true religion until it is supreme in all respects. I further questioned whether there was anybody, who, after embracing his religion, became disenchanted and then apostatized. Your reply was, ‘No’, and thus is [the effect of] real faith, when its delight enters the hearts and infuses it completely. I asked you after that, if he was ever disloyal and you told me he was not; similarly do the messengers never betray.

I went on to inquire what it is that he orders you to do. You replied that he enjoins you to worship Allah and not associate partners with Him and forbade you to deify idols; and, he commands you to pray, speak the truth and be chaste. If what you have said is true, then he [i.e., the Prophet

] will soon come to occupy this very place under my feet. I knew [from the Scriptures] that he was going to emerge, but was unaware that he would be from amongst you. If I could reach him definitely, I would immediately go to meet him; and if I were in his company, I would certainly wash his feet.”

Heraclius then asked for the letter of the Messenger of Allah

that was being hand-delivered to him by Dihyah, may Allah be pleased with him. The letter read:

In the Name of Allah, The Most Merciful, The Ever Merciful.

[This letter is] from Muhammad, the slave and Messenger of Allah, to Heraclius, the great King of Rome.

May peace be upon those who follow the guidance!

In proceeding, I [wish to] invite you to Islam. Embrace Islam so that you may find peace and Allah will give you a double reward. If you refuse, then on you shall rest the sin of your subjects and followers.

[I quote the Words of Allah The Almighty] “O People of the Scripture, come to a word that is equitable between us and you - that we will not worship except Allah and not associate anything with Him and not take one another as lords instead of Allah. But if they turn away, then say, ‘Bear witness that we are Muslims.’” [Quran 3:64]

Abu Sufyaan recounts: “When Heraclius had finished his speech and read the letter, there was a great hue and cry in the royal court. So, we were escorted out. I told my companions that the question of Ibn Abi Kabshah [i.e., Prophet Muhammad] had become so prominent that even the King of Banu Al-Asfar (Byzantines) was afraid of him. I then became certain that he

will eventually be the conqueror until [I attested to it when] I embraced Islam.”

A sub-narrator of this incident adds,
“Heraclius then wrote a letter to his friend in Rome who was as knowledgeable as him. Subsequently, he left for Homs (a town in Syria) and stayed there, until he received a reply from him that confirmed his belief regarding the emergence of a prophet, which was him [i.e, Muhammad

]. Thereupon, Heraclius invited all the chiefs of Byzantine to assemble in his palace in Homs. When they convened, he ordered that all the gates be closed. Then, he emerged and said, ‘O Byzantine! If success is your desire and you seek true guidance; and you want your empire to remain, then give a pledge of allegiance to this Prophet [by embracing Islam].’ Upon hearing the views of Heraclius, the people fled like onagers only to find the entrances blocked. Heraclius then realized their hatred towards Islam and when he lost hope in their acceptance of Islam [as their religion], he ordered them to be brought back in the audience. When they returned, he stated, ‘What I said was just to test the strength of your conviction; and I have now seen it.’ Hence, the people prostrated before him, pleased with him, and this marked the end of Heraclius’ story [in connection with his faith].”
Separately, ‘Abdullaah ibn ‘Abbaas quotes Abu Sufyaan, may Allah be pleased with them, as saying: “By Allah! Had I not been ashamed of being branded a liar by my companions, I would not have spoken the truth about him [i.e., Muhammad

] when [Heraclius] questioned me.” In fact, the most damaging statement he could get in edgewise was when Heraclius asked him if he

was treacherous, and he said: “No; [but] we are in a truce with him and do not know his potential actions.”