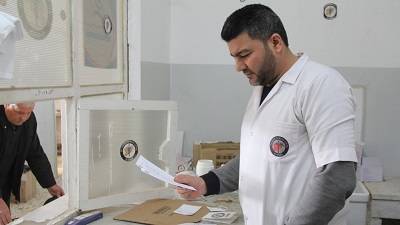 And why is the UN not naming the perpetrators?

My name is Rashed al-Ahmad. I'm a pharmacist originally from Kurnaz, a small village in the countryside of Syria's Hama province. I fled my home years ago to avoid being detained or killed by the regime for providing medicine and drugs to the injured protesters.

In 2014, I moved with my family to a nearby village outside the regime's control called Kafr Nabouda and got a job at a primary health centre. I was working there until a month and a half ago when the regime, backed by Russia, bombarded the village and destroyed the clinic, forcing us to flee again.

I used to spend long hours at work, doing all I could to serve my new community. I never thought that Russia and the regime would target us. The clinic was small and most of our patients were children and the elderly.

Ten days after the attack, in a briefing to the United Nations Security Council about the assault on northwest Syria, the UN Under-Secretary-General for Humanitarian Affairs and Emergency Relief Coordinator, Mark Lowcock, mentioned Kafr Nabouda, as he was listing health facilities in northwest Syria that had been attacked. I hoped he would name and shame the perpetrators, but he didn't. Since that speech, he still hasn't condemned either the Syrian regime or its backer, Russia, who are responsible for destroying the clinic.

About three years ago, doctors at my health centre had to decide whether to share the building's coordinates with the UN. As part of its deconfliction mechanism, the UN shares the coordinates of humanitarian facilities with parties involved in the Syrian conflict, including the regime and Russia. The hope was that the two allies, the only ones with aerial capabilities in the conflict, would then avoid targeting these buildings.

People here tell a joke about the deconfliction mechanism. A hospital protected under the mechanism was bombed; the UN asked the Russians if they did it; the Russians said that they didn't mean to bomb the hospital but the bakery near it.

Since the conflict began in 2011, there have been at least 516 attacks on health facilities perpetrated by the regime and Russia, killing 890 medical workers.

Three-quarters of the hospitals in northern Syria were built after the uprising began. We built them and have rebuilt them many times, as the Syrian regime has continuously bombed them. We struggle to do this every time due to limited resources, but we have to do it, otherwise, we cannot provide healthcare and we leave people with the treatable illness to die.

Despite knowing the risk, our doctors trusted the UN and believed that sharing the coordinates of the centre would best guarantee our safety. After a great deal of deliberation, last year they contacted the UN and provided the needed information.

In his briefing, Lowcock said that 18 health facilities had been targeted in two weeks. The UN had the coordinates of nine of them (including our centre) and had passed them on to Russia and the regime. Lowcock and his team know very well who was responsible for the attacks, but have chosen neither to name them nor to publicly question the effectiveness of the deconfliction mechanism and investigate the possible use of shared data to deliberately target humanitarian facilities.

Since 26 April, when Russia and the regime began their bombing campaign in Idlib and northern Hama provinces, 29 health centres have been targeted and 49 have suspended their services. The continuous air strikes have triggered another wave of collective displacement, with 300,000 people forced to flee across the northwest. At least 352 civilians have been killed.

My wife, our three children and I now live in a camp for the internally displaced near the Turkish border. I worry about the sick people of my village: where are they now and how are they managing their illnesses? What will happen to these patients whose prescriptions I know by heart?

Today, I live with the heavy conscience that one year ago we probably made a mistake giving the UN the coordinates of our centre. It is clear by now that the very institutions that are supposed to protect us, civilians, have failed us. And what adds insult to injury is that they won't even name those who bomb us, kill us and destroy our homes, hospitals and schools on a daily basis.

But we know who they are and we are not afraid to name them: the Syrian regime and Russia.