The story of Prophet Adam - I 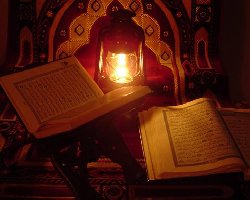 Allah Almighty revealed in the Quran (what means): "And [mention, O Muhammad], when your Lord said to the angels: 'Indeed, I will make upon the earth a successive authority.' They said: 'Will You place upon it one who causes corruption therein and sheds blood, while we declare Your praise and sanctify You?' He [Allah] said:  'Indeed, I know that which you do not know.' And He taught Aadam the names - all of them. Then He showed them to the angels and said: 'Inform Me of the names of these, if you are truthful.' They said: 'Exalted are You; we have no knowledge except what You have taught us. Indeed, it is You who is the Knowing, the Wise.' He said: 'O Aadam! Inform them of their names.' And when he had informed them of their names, He said: 'Did I not tell you that I know the unseen [aspects] of the heavens and the earth? And I know what you reveal and what you have concealed.' And [mention] when We said to the angels: 'Prostrate before Aadam'; so they prostrated, except for Iblees [Satan]. He refused and was arrogant and became of the disbelievers. And We said: 'O Aadam! Dwell, you and your wife, in and eat therefrom in [ease and] abundance from wherever you will. But do not approach this tree, lest you be among the wrongdoers.' But Satan caused them to slip out of it and removed them from that [condition] in which they had been. And We said: 'Go down, [all of you], as enemies to one another, and you will have upon the earth a place of settlement and provision for a time.' Then Aadam received from his Lord [some] words, and He accepted his repentance. Indeed, it is He who is the Accepting of repentance, the Merciful. We said: 'Go down from it, all of you. And when guidance comes to you from Me, whoever follows My guidance - there will be no fear concerning them, nor will they grieve. And those who disbelieve and deny Our signs - those will be companions of Fire; they will abide therein eternally.'" [Quran 2:30-39]

Almighty Allah also revealed (what means): "And We have certainly created you, [O mankind], and given you [human] form. Then We said to the angels: 'Prostrate to Aadam'; so they prostrated, except for Iblees. He was not of those who prostrated. [Allah] said: 'What prevented you from prostrating when I commanded you?' [Satan] said: 'I am better than him. You created me from fire and created him from clay [i.e. earth].' [Allah] said: 'Descend from it [i.e. ], for it is not for you to be arrogant therein. So get out; indeed, you are of the debased.' [Satan] said: 'Reprieve me until the Day they are resurrected.' [Allah] said: 'Indeed, you are of those reprieved.' [Satan] said: 'Because You have put me in error, I will surely sit in wait for them [i.e. mankind] on Your straight path. Then I will come to them from before them and from behind them and on their right and on their left, and You will not find most of them grateful [to You].' [Allah] said: 'Get out of it [i.e. ], reproached and expelled, Whoever follows you among them - I will surely fill Hell with you, all together.' And: 'O Aadam! Dwell, you and your wife, in and eat from wherever you will but do not approach this tree, lest you be among the wrongdoers.' But Satan whispered to them to make apparent to them that which was concealed from them of their private parts. He said: 'Your Lord did not forbid you this tree except that you become angels or become of the immortal.' And he swore [by Allah] to them: 'Indeed, I am to you from among the sincere advisors.' So he made them fall, through deception. And when they tasted of the tree, their private parts became apparent to them, and they began to fasten together over themselves from the leaves of . And their Lord called to them: 'Did I not forbid you from that tree and tell you that Satan is to you a clear enemy?' They said: 'Our Lord! We have wronged ourselves, and if You do not forgive us and have mercy upon us, we will surely be among the losers.' [Allah] said:  'Descend, being to one another enemies. And for you on the earth is a place of settlement and enjoyment [i.e. provision] for a time.' He said: 'Therein you will live, and therein you will die, and from it you will be brought forth.'” [Quran 7:11-25]

When Allah the Almighty created Aadam, may Allah exalt his mention, He addressed His angels and told them to prostrate before him. The purpose behind that was not to ask their opinion or take their advice, for He is above that. Allah the Exalted told them that He was going to create a vicegerent on the earth who would have offspring. That is why the angels said to Allah the Almighty (what means): "…Will You place upon it one who causes corruption therein and sheds blood…" [Quran: 2:30]

According to the prominent Muslim scholar Qataadah

Whether or not these traditions are correct, the angels did understand that Allah would create a vicegerent on earth. Allah the Almighty announced that He was going to create a human being out of clay, that He would mould him and blow His spirit into him and that the angels should then prostrate before him.

(may Allah exalt his mention) said: "Allah created Aadam from a handful of dust taken from different lands, so the children of Aadam have been created according to the composition of the land. Therefore from mankind we have white, red, black and yellow; we have good and evil, ease and sorrow, and what comes in between them." [Al-Bukhari]

So Allah shaped Aadam, may Allah exalt his mention, into a human being; but he remained a figure of clay for forty years. The angels went past him. They were seized with fear by what they saw, and Iblees felt the most fear. He would pass by the figure of Aadam, may Allah exalt his mention, buffeting it, which would make a sound like pottery. Allah Says (what means): "He created man [Aadam] from clay like [that of] pottery." [Quran: 55:14]

Iblees believed that he was more honourable than Aadam, may Allah exalt his mention. Therefore, he abstained from prostrating, even though Allah had commanded him to do so, just as He had commanded the angels.

Iblees tried in vain to justify his refusal; he said (what means): "…'Should I prostrate to one You created from clay? Do you see this one who You have honoured above me? If you delay me [i.e., my death] until the Day of Resurrection, I will surely destroy [i.e., lead astray] his descendants, except for a few.'" [Quran: 17:61-62]

Aadam, may Allah exalt his mention, was following what was happening around him and had feelings of love, awe, and astonishment - deep love of Allah, who had created and glorified him and who had made His angels prostrate before him; awe of the Creator's wrath when He excluded Iblees from His mercy. Aadam, may Allah exalt his mention, was surprised by this creature, Iblees, who abhorred him without even knowing him and who imagined himself better than him without having proved that he was worthier. What a strange creature Iblees was, and how strange was his excuse for not prostrating!

The story of Prophet Aadam – II