The Story of Prophet Ayyoob -I 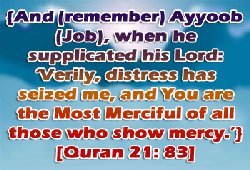 all. There have also been other statements on his lineage. Imam Ibn 'Asakir

narrated that Prophet Ayyoob's mother was a daughter of

. It was said also that Prophet Ayyoob's father was one who believed in Ibraheem

when he was cast into the fire.

The first opinion is the most plausible, because Prophet Ayyoob

was a descendant of Ibraheem's offspring, as Allah Almighty declares in the Quran (what means): "And that was Our [conclusive] argument which we gave Ibraaheem against his people. We raise by degrees whom We will. Indeed, your Lord is Wise and Knowing. And We gave to him [i.e., Ibraheem] Ishaq [Isaac] and Ya'qoob [Jacob] – all [of them] We guided. And Nooh [Noah], We guided before; and among his descendants, Dawood [David] and Sulayman [Solomon] and Ayyoob [Job] and Yoosuf [Joseph] and Moosa [Moses] and Haroon [Aaron]. Thus do We reward the doers of good." [Quran 6:83-84]

Allah the Almighty praised His worshipper Ayyoob, may Allah exalt his mention, in His Glorious Quran, Saying (what means): "…Indeed, We found him patient, an excellent servant. Indeed, he was one who repeatedly turned back [to Allah]." [Quran 38:44]

was repentant, remembering Allah with thankfulness, patience, and steadfastness. This was the cause of his rescue and the secret of Allah's praising him.

A group of angels were discussing Allah's other human creatures, how those who were humble earned Allah's pleasure, while those who were arrogant incurred His displeasure. One of the angels remarked: "The best creature on earth today is Ayyoob, a man of noble character who displays great patience and always remembers his Generous Lord. He is an excellent model for the worshippers of Allah. In return, his Lord has blessed him with a long life and plenty of servants, as well as the needy and the poor sharing in his good fortune; he feeds and clothes the poor and buys slaves to set them free. He makes those who receive his charity feel as if they are favouring him, so kind and gentle is he."

Satan's Envy of Him

Iblees (Satan) overhearing all of this, became annoyed. He planned to entice Ayyoob to corruption and disbelief, so he hastened to him. He tried to distract Ayyoob from his prayers by whispering to him about the good things in life, but Ayyoob was a true believer and would not let evil thoughts tempt him. This disturbed Iblees even more; thus he began to hate Ayyoob with even greater fervour.

. He said that although he was continuously glorifying Allah, he was not doing so out of his sincerity but to satisfy Allah so that his wealth should not be taken away. It was all a show, all out of greed. "If You remove his wealth, then You will find that his tongue will no longer mention Your name and his praying will stop," he said to Allah.

was one of His most sincere devotees. He did not worship Him because of the favours; his worship stemmed from his heart and had nothing to do with material things. But to prove to Iblees the depth of Ayyoob's sincerity and patience, Allah allowed him to do whatever he and his helpers wished with Ayyoob's wealth.

Iblees was ecstatic. He gathered his helpers and set about destroying Ayyoob's cattle, servants and farms until he was left with no possessions. Rubbing his hands in glee, Iblees appeared before Ayyoob

in the guise of a wise old man and said to him: "All your wealth is lost; some people say that it is because you gave too much in charity and that you are wasting your time with your continuous prayers to Allah. Others say that Allah has brought this upon you in order to please your enemies. If Allah had the capacity to prevent harm, then He would have protected your wealth."

True to his belief, Ayyoob

replied: "What Allah has taken away from me belongs to Him. I was only its trustee for a while. He gives to whom He wills and withholds from whom He wills." With these words, Ayyoob

again prostrated to his Lord.

When Iblees saw this, he felt frustrated, so he again addressed Allah: "I have stripped Ayyoob of all his possessions, but he still remains grateful to You. However he is only hiding his disappointment, for he places great store by his many children. The real test of a parent is through his children. You will see how Ayyoob will reject You."

Allah again granted Iblees authority, but warned him that it would not reduce Ayyoob's faith in His Lord nor his patience.

Iblees again gathered his helpers and set about his evil deeds. He shook the fountain of the house in which Ayyoob's children were living and sent the building crashing, killing all of them. Then he went to Ayyoob

disguised as a man who had come to sympathise with him. In a comforting tone he said to Ayyoob

: "The circumstances under which your children died were sad. Surely, your Lord is not rewarding you properly for all your prayers." Having said this, Iblees waited anxiously, hoping Ayyoob

was now ready to reject Allah.

disappointed him by replying: "Allah sometimes gives and sometimes takes. He is sometimes pleased and sometimes displeased with our deeds. Whether a thing is beneficial or harmful to me, I will remain firm in my belief and remain thankful to my Creator." Then Ayyoob

prostrated to his Lord. At this, Iblees was extremely vexed.