The story of Prophet Ayyoob -II 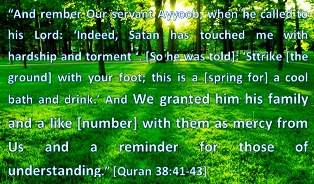 Ayyoob is tested through his health

After failing to make Ayyoob

give up his worship of Allah after destroying his wealth and children, Iblees (Satan), may Allah curse him, called on Allah: "O my Lord! Ayyoob's wealth is gone, his children are dead, but he is still healthy in body, and as long as he enjoys good health he will continue to worship You in the hope of regaining his wealth and producing more children. Grant me authority over his body so that I may weaken it. He will surely neglect worshipping You and will thus become disobedient."

was a devoted servant of his Lord, so He granted Iblees his third request but placed a condition: "I give you authority over his body but not over his soul, intellect or heart, for in these places resides the knowledge of Me and My religion."

Armed with this new authority, Iblees began to take revenge on Ayyoob's body, and filled it with disease until it was reduced to mere skin and bone and he suffered severe pain. But through all the suffering, Ayyoob

remained strong in his faith, patiently bearing all the hardships without complaining.

Allah's righteous servant did not despair or turn to others for help but remained hopeful of Allah's mercy. Even close relatives and friends deserted him. Only his kind, loving wife stayed with him. In his hour of need, she showered her kindness on him and cared for him. She remained his sole companion and comforter through the many years of suffering.

was a man having much wealth of all kinds; beasts, slaves, sheep, vast lands, and many children. All those favours were withdrawn from him and he was physically afflicted as well. Never a single organ of his was sound, except his heart and tongue, with both of which he glorified Allah, the Almighty, constantly, day and night. His disease lasted for a long time until his visitors felt disgusted with him. His friends kept away from him and people abstained from visiting him. No one felt sympathy for him except his wife. She took good care of him, knowing his former charity and pity for her."

Therefore, Iblees became desperate. He consulted his helpers, but they could not advise him. They asked: "How is it that your cleverness cannot work against Ayyoob, yet you succeeded in misleading Adam, the father of man, out of ?"

Iblees went to Ayyoob's wife in the form of a man. "Where is your husband?" he asked her. She pointed to an almost lifeless form crumbled on the bed and said: "There he is, suspended between life and death." Iblees reminded her of the days when Ayyoob

had good health, wealth and children. Suddenly, the painful memories of years of hardship overcame her, and she burst into tears. She said to Ayyoob

: "How long are you going to bear this torture from our Lord? Are we to remain without wealth, children or friends forever? Why don't you call upon Allah to remove this suffering?"

sighed, and in a soft voice replied: "Iblees must have whispered to you and made you dissatisfied. Tell me, how long did I enjoy good health and riches?" She replied: "Eighty years." Then Ayyoob

asked: "How long have I been suffering like this?" She replied: "Seven years." Ayyoob

then told her: "In that case I am ashamed to call on my Lord to remove the hardship, for I have not suffered longer than the years of my good health and plenty. It seems your faith has weakened and you are dissatisfied with the fate of Allah. If I ever regain health, I swear I will punish you with a hundred strokes! From this day onward, I forbid myself to eat or drink anything by your hand. Leave me alone and let my Lord do with me as He pleases."

Crying bitterly and with a heavy heart, she had no choice but to leave him and seek shelter elsewhere. In this helpless state, Ayyoob

turned to Allah, not to complain, but to seek His mercy, saying (what means): "…'Indeed, adversity has touched me, and You are the most merciful of the merciful.' So We responded to him and removed what afflicted him of adversity. And We gave him [back] his family and the like thereof with them as a mercy from Us and a reminder for the worshippers [of Allah]." [Quran 21:83-84]

Almighty Allah records Prophet Ayyoob's invocation in the verses (which mean): "And remember Our servant Ayyoob, when he called to his Lord: 'Indeed, Satan has touched me with hardship and torment.' [So he was told]: 'Strike [the ground] with your foot; this is a [spring for] a cool bath and drink.' And We granted him his family and a like [number] with them as mercy from Us and a reminder for those of understanding." [Quran 38:41-43]

obeyed this instruction, and almost immediately his good health was restored. Meanwhile, his faithful wife could no longer bear to be parted from her husband and returned to him to beg his forgiveness, desiring to serve him. On entering her house, she was amazed at the sudden change: Ayyoob

was again healthy! She embraced him and thanked Allah for His mercy.

was worried, for he had taken an oath to punish her with a hundred strokes if he had regained health but he had no desire to hurt her. He knew if he did not fulfil the oath, he would be guilty of breaking a promise to Allah. Therefore, out of His wisdom and mercy, Allah came to the assistance of His faithful servant and advised him with (what means): "…'Take in your hand a bunch [of grass] and strike with it and do not break your oath.' Indeed, We found him patient, an excellent servant. Indeed, he was one who repeatedly turned back [to Allah]." [Quran 38:44]

said: "While Ayyoob was naked, taking a bath, a swarm of gold locusts fell on him, and so he started collecting them in his garment. His Lord called him: "O Ayyoob! Have I not made you too rich to need what you see?" He said: "Yes, My Lord! But I cannot shun Your Blessings." [Al-Bukhari]