The story of Prophet Eesaa -II 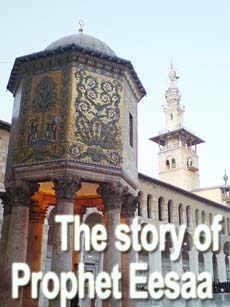 In the first part of the Story of Prophet 'Eesaa (Jesus), may Allah exalt his mention, we highlighted the most important events in his life: his miraculous birth, his childhood, the opposition of the Jewish authorities to his mission, his miracles, etc. Here we continue his story:

'Eesaa, may Allah exalt his mention, suddenly prostrated, and his disciples followed suit. They sensed a fragrance, which they had never smelled before. 'Eesaa, may Allah exalt his mention, said: "The one who is the most devout and most righteous may uncover the table, that we might eat of it to thank Allah for it." They said: "O Spirit of Allah! You are the most deserving."

'Eesaa, may Allah exalt his mention, stood up, performed ablution and prayed before uncovering the table, and behold, there was a roasted fish. The disciples said: "O Spirit of Allah! Is this the food of this world or of ?" 'Eesaa, may Allah exalt his mention, said to his disciples: "Did not Allah forbid you to ask questions? It is the divine power of Allah the Almighty, Who said: 'Be' and it was. It is a sign from Almighty Allah warning of great punishment for unbelieving mortals of the world. This is the kernel of the matter."

It is said that thousands of people ate from it, and yet it was never entirely consumed. A further miracle was that the blind and lepers were cured by 'Eesaa, may Allah exalt his mention, by Allah's leave.

The Day of the Table became one of the holy days for the disciples and followers of 'Eesaa, may Allah exalt his mention. Later, the disciples and followers who forgot the real essence of the miracles, worshipped 'Eesaa, may Allah exalt his mention, as a god. Almighty Allah asserts (what means): "And [beware the Day] when Allah will say: 'O 'Eesaa, Son of Maryam! Did you say to the people: 'Take me and my mother as deities besides Allah?' He (i.e. ‘Eesaa) will say: 'Exalted are You! It was not for me to say that to which I have no right. If I had said it, You would have known it. You know what is within myself, and I do not know what is within Yourself. Indeed, it is You who is Knower of the unseen'" [Quran: 5:116]

'Eesaa, may Allah exalt his mention, went on his mission, until the corrupted leaders and hypocritical men of religious power felt his threat to them. So the forces of evil accused him, may Allah exalt his mention, of magic, infringement of the Mosaic Law, and allegiance with the devil; and when they saw that the poor people followed him, they began to scheme against him.

Allah the Almighty declares (what means): "And [We cursed them for] their saying: 'Indeed, we have killed the Messiah, 'Eesaa, the son of Maryam, the messenger of Allah.' And they did not kill him, nor did they crucify him; but [another] was made to resemble him to them. And indeed, those who differ over it are in doubt about it. They have no knowledge of it except the following of assumption. And they did not kill him, for certain. Rather, Allah raised him to Himself. And ever is Allah Exalted in Might and Wise." [Quran: 4:157-158]

Almighty Allah also revealed (what means): "[Mention] when Allah said: 'O 'Eesaa! Indeed I will take you and raise you to Myself and purify [i.e., free] you from those who disbelieve and make those who follow you [in submission to Allah alone] superior to those who disbelieve until the Day of Resurrection. Then to Me is your return, and I will judge between you concerning that in which you used to differ.'" [Quran: 3:55]

Almighty Allah refutes the claims of the Jews and the Christians many times in the Glorious Quran. For example, He Says (what means): "

In many verses, in addition to those already mentioned, Allah, the  Almighty, affirmed His being highly above having a child, a wife, or a partner, thus, refuting all such false allegations. Allah, the Almighty, revealed a separate Quranic chapter to affirm His Unity and Uniqueness. This chapter is the one-hundred and twelfth, the meaning of which is: "Say: 'He is Allah, [who is] One. Allah, the Eternal Refuge. He neither begets nor is born. Nor is there to Him any equivalent.'" [Quran: 112:1-4]