Arabia before the Prophet Muhammad –II 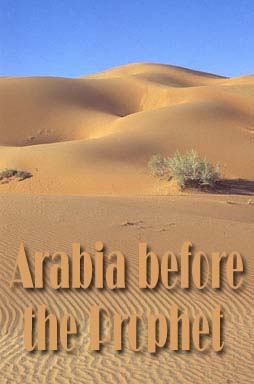 Social Life of the Arabs

Before the advent of Prophet Muhammad

Arabian society was divided into several social strata, which produced both advantages and disadvantages in the resultant social structure. Women among the nobility were accorded an advanced degree of esteem. They enjoyed considerable free will in almost all spheres of life and their decision would usually be enforced. They were so highly cherished and fiercely protected, that very often bloodshed resulted in defense of real or imaginary slurs to their honor. In fact, women were believed to be the most decisive factors that led to bloody fights or friendly peace among tribes. These privileges notwithstanding, the family system in Arabia was wholly patriarchal. The marriage contract rested completely in the hands of the woman’s legal guardian whose words with regard to her marital status could never be questioned. On the other hand, there were other sectors where prostitution and indecency were rampant and in full operation.

on the authority of ‘Aa'ishah

First method: This was similar to present-day Islamic marriage procedures, in which case a man gives his daughter in marriage to another man after a dowry has been agreed on.

Second method: The husband would send his wife – after the menstruation period – to cohabit with another man in order to conceive. After conception her husband would, if he desired, have sexual intercourse with her.

Third method: This was that a group of less than ten men would have sexual intercourse with a woman. If she conceived and gave birth to a child, she would send for these men, and nobody could abstain. They would come together to her house. She would then say: ‘You know what you have done. I have given birth to a child and it is your child’ (pointing to one of them). The man meant would have to accept.

Fourth method: This was that many men would have intercourse with a certain woman (a prostitute). She would not prevent anybody. Such women used to put a certain flag at their gates to invite in anyone who liked. If this woman got pregnant and gave birth to a child, she would collect those men, and a soothsayer would tell whose child it was. The appointed father would take the child and declare him/her his own. When the Prophet

declared Islam in Arabia, he

cancelled all these forms of sexual contact except that of present Islamic marriage.

Pre-Islamic Arabs had no limited number of wives. They could marry two sisters at the same time, or even the wives of their fathers if divorced or widowed, and divorce was to a very great extent in the power of the husband.

With respect to the pre-Islamic parent-child relationship, we see that life in Arabia was paradoxical and presented a gloomy picture of contrasts. Whilst some Arabs held children dear to their hearts and cherished them greatly, others buried their female children alive because an illusory fear of poverty and shame weighed heavily on them.

Another aspect of the Arabs’ life, which deserves mention, is the Bedouin’s deep-seated emotional attachment to his clan. Family or perhaps tribalpride was one of the strongest passions within him. The unity of blood relations as the principle that bound the Arabs into social unity was formed and supported by tribal pride. Their undisputed motto was “Support your brother whether he is an oppressor or oppressed.” They disregarded the Islamic amendment, which states that supporting an oppressive brother implies deterring him from transgression.

Hunger for leadership and a keen sense of inter-tribal competition often resulted in bitter tribal warfare, despite their having descended from one common ancestor. In this regard, the continued bloody conflicts of many Arab tribes like ‘Aws and Khazraj, ‘Abs and Dhubyan, Bakr and Taghlib etc. are striking examples.

Inter-tribal relationships were fragile and weak due to continual inter-tribal wars of attrition. The deep devotion of the tribes to certain religious superstitions and venerable customs often curbed their impetuous tendency to quench their thirst for blood. In other cases, the respect for alliance, loyalty and dependency sometimes brought about a spirit of companionship, and aborted groundless bases of dispute. A time-honored custom of suspending hostilities during the four sacred months of Hijiri calendar (Muharram, Rajab, Thul-Qi‘dah, and Thul-Hijjah) functioned favorably and provided an opportunity for them to earn their living and coexist in peace.

We may sum up the social situation in Arabia by saying that the Arabs of the pre-Islamic period were groping about in darkness and ignorance, entangled in a mesh of superstitions paralyzing their mind and causing them to lead an animal-like life. The common woman was a marketable commodity and regarded as a piece of inanimate property. Inter-tribal relationships were fragile. Greed for wealth and involvement in futile wars were the main objectives that governed their self-centered policies.

The economic situation ran in line with the social atmosphere, and the Arabian way of life illustrated this phenomenon quite clearly. Trade was the most common means of livelihood. Trade journeys could not be undertaken unless caravan routes were deemed safe and there was inter-tribal peace – two imperative necessities unfortunately lacking in Arabia, except during the four sacred months within which the Arabs held their assemblies at the annual markets of ‘Ukath, Thil-Majaz, Mijannah and others.

Industry was alien to the Arabian psychology. Most of the available industries of knitting and tannery in Arabia were done by people coming from Yemen, Heerah and the borders of Syria.

1. Hospitality: The Arabs used to compete with one another in hospitality and take utmost pride in it. Almost half of their collection of ancient poetry was dedicated to the merits and nobility attached to entertaining one’s guest. They would sacrifice their private sustenance for a cold or hungry guest. They would not hesitate to incur heavy blood-money and relevant burdens just to stop blood-shed, and consequently merit praise and eulogy.

In the context of hospitality, there springs to mind their common habits of drinking and serving wine, which was regarded as a channel branching out of generosity and showing hospitality. Gambling was also another practice closely associated with generosity, since the proceeds would always go to charity. Even the Noble Quran makes note of the benefits that are derived from drinking wine and gambling, and clarifies its harms too. Allah Says (what means): {In them is great sin and [yet, some] benefit for people. But their sin is greater than their benefit} [Quran 2:219]

2. Keeping a covenant: For the Arab, to make a promise was like incurring a debt. He would go through great pains and hardship to uphold the deep-rooted tradition of keeping a covenant. The literature of that period is filled with stories highlighting this merit.

3. Sense of honor and repudiation of injustice: This attribute stemmed mainly from exaggerated courage, a keen sense of self-esteem and impetuosity. The Arabs was always quick to rise in revolt and retaliation against the least allusion to humiliation or slackness. An Arab would never hesitate to sacrifice himself to maintain his ever-alert sense of self-respect.

4. Forbearance, perseverance and mildness: In general, the pre-Islamic Arabs lacked these qualities. They may have regarded these traits with great admiration, but their impetuosity and war-like spirit led to their own lives being sadly wanting in them.

5. Pure and simple Bedouin life: The Bedouin Arab lifestyle, still untarnished with the accessories of deceptive urban appearances, was a driving reason to their nature of truthfulness, honesty and detachment from intrigue and treachery.

Such priceless ethics coupled with the favorable geographical position of Arabia were in fact the factors that lay behind the Arabs being chosen to undertake the burden of communicating the Message (of Islam) and leading humankind down a new course of life.

The most priceless ethics, besides being true to their covenants, were no doubt their sense of self-esteem and strong determination two human traits indispensable in combating evil and eliminating moral corruption on the one hand, and establishing a righteous and just society on the other.