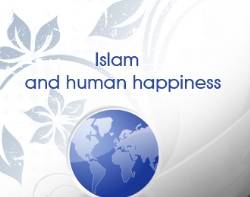 If we examine all the orders and laws of Islam, we find that every single law or order aims at bringing happiness to the individual. This applies to Islamic regulations with regard to worship, economics, penal laws and all other aspects of life.

The Belief in Allah and Psychological Security

When a person believes in Allah, this belief gives him a strong feeling of security, which is a basic psychological need. This belief in Allah gives the believer a strong support in critical moments and gives him continuous hope against all sources of despair. This belief gives strength to the sick and hope to the hopeless.

The Belief in Allah and Ethical Responsibility

A person who believes in Allah tends to be more ethically responsible than a person who does not believe. This belief makes a person feel that he is being observed by Allah everywhere and on all occasions. This feeling makes a person try to be as uncorrupted and as far from sin as possible.

The Belief in Life after Death and the Feeling of Continuity

A Muslim believes in life after death. This belief gives the person a feeling of continuity. To a Muslim, death is not the end of life; rather it is a transition from the first life to the second one. A Muslim is not horrified by death because he knows that death is a change into another life.

The Day of Judgment and God's Justice

A Muslim believes in the Day of Judgment, a day when every person is rewarded or punished for his deeds in this life. This belief gives the person a feeling of satisfaction with the justice of Allah. Allah is fair; everybody is responsible for his actions. This responsibility makes everybody watch himself and his own deeds.

A Connection with God

A Muslim should fast for one month every year. This fasting trains the man's will and frees him from being enslaved by his own habits. Fasting also makes man more sympathetic with others suffering poverty or deprivation.

A Sense of Belonging

A Muslim is urged to perform prayers with other men in groups. The Friday noon prayer must be a collective prayer. Pilgrimage is a collective practice. These practices help man to grow socially and to feel that he belongs. The feeling of belonging is one of the basic psychological needs of man.

Islam regulates the relations of the two sexes and discourages any unnecessary intermingling of the two sexes. This helps both sexes to be away from any source of sexual temptation or tension.

Islam instructs both men and women to cover certain parts of the body. The woman should cover all her body except the hands and face. The purpose is to protect both the man and the woman from sin and tension. It has been proved medically, that neurological tension ends up causing many diseases in the heart and the digestive system.

Islam prevents the drinking of alcoholic drinks in order to protect the human body from their damaging effect. Such drinks also damage the functions of the mind and the nervous system.

Islam prohibits adultery and legislates a severe punishment for adulterers and adulteresses, in order to protect marriage as a sacred institution, to protect the family as the best social cell for human life and to protect children from homelessness. Islam punishes a false accuser of adultery, because no liar has the right to spoil others' lives.

No Interest in Economy

Islam prohibits interest because individuals in the same society should be partners. In the interest-banking system, the depositor requires a certain interest on his deposited money, whether the bank profits or loses. The interest system is a big blow to social solidarity. In Islam, interest is not allowed. The alternative in Islam is partnership, where all partners share the profit or loss in proportion to their invested shares. This system of Islamic sharing is fairer and often more profitable to a greater number of partners.

Islam gives man solutions to his major problems. These solutions simplify the way and give him help and the guidance that he needs. Without these solutions, man is unable to reach a decision on many issues. If we look around, we find that many countries have several political parties that adopt contradictory policies and give contradictory answers to the questions of economics, politics and law.

This shows us that man is not capable of solving his basic problems on his own. If we examine Western civilization, we find that people there disagree on everything: the existence of Allah, the role of religion, divorce, marriage, racial discrimination, crime and punishment.

In Islam, the ruler must secure the basic needs to everybody under his rule regardless of religion or race. The individual is entitled to the rights of housing, eating, clothing, learning and medical care.

Every single verse in the Quran and every single tradition of the Prophet Muhammad,