The greatness of Islamic justice 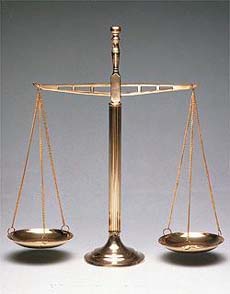 Allah created man to be His servant and to implement His Way on earth. If humans distance themselves from this message, then they distance themselves from God’s injunctions. That is why Islam has prepared its followers to follow this righteous instinct; it is a joy to our spirit to stand and think of the greatness of Islamic justice, how fair Islamic law is to individuals and groups, rulers and the ruled!

This is Islamic justice, an ordinary Bedouin taking the Caliph to court, deciding which judge to go to and the Caliph accepting the judge’s decision voluntarily. However, this leader was not an ordinary man, but the one about whom the Prophet

said: “O Allah! Make Islam victorious by one of the two `Umars (by them becoming Muslim).”
`Umar, may Allah be pleased with him, did not threaten the Bedouin or misuse his power, neither did he tell the Bedouin that he had exceeded his authority nor that he would get back to him. No, `Umar accepted the judge’s decision with all modesty.

`Umar, may Allah be pleased with him, admitted that the horse was healthy when he took it and he accepted the judgment, making the case an everlasting example of Islamic justice. The judge’s fairness made ‘Umar, may Allah be pleased with him, appoint him as a judge of Koofah. He rewarded the judge for his justice and fairness and did not jail him for ruling against him, as some leaders may have done in present so-called ‘democracies’.

Another example of Shurayh’s justice

Then ‘Ali turned to the man and said: “Take the shield, as I have no other witnesses.”
The man, who was a non-Muslim, then said: “O ‘Ali, the shield is yours. What a great religion! I can sue ‘Ali and get a judge to pass a decision for my benefit! I declare myself a Muslim.” He told the judge that he was following the army and had seen the shield fall down and picked it up. ‘Ali, may Allah be pleased with him, then told him to keep the shield, and on top of that, he also gave him a horse. Soon after, the man was seen under Ali’s leadership fighting the Khawaarij [Kharijites –are one of the deviant sects, who follow their whims and desires and innovation, and deviated from the path of Ahlus-Sunnah wa’l-Jamaa‘ah].

Are these two examples not sufficient for us to follow those great men?