Human rights in an Islamic state 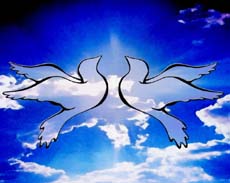 Islam, as represented in the Holy Quran and the Sunnah of Prophet Muhammad

(may Allah exalt his mention), laid down human rights centuries before they were known to the modern world. The following are some of these rights:

1. The security of Life and Property:

In the address which the Prophet

delivered on the occasion of the Farewell Hajj, he said: “Your lives and properties are forbidden to one another till you meet your Lord on the Day of Resurrection.” The Prophet

has also said about the Thimmis (the non-Muslim citizens of the Muslim state): “One who kills a man under covenant (i.e., Thimmi) will not even smell the fragrance of .”

2. The Protection of Honour:

The Holy Quran lays down this right, stating: “O you who have believed! Let not a people ridicule [another] people; perhaps they may be better than them; nor let women ridicule [other] women; perhaps they may be better than them. And do not insult one another and do not call each other by [offensive] nicknames. Wretched is the name [i.e. mention] of disobedience after [one’s] faith. And whoever does not repent -  then it is those who are the wrongdoers. O you who have believed! Avoid much [negative] assumption. Indeed, some assumption is sin. And do not spy or backbite each other. Would one of you like to eat the flesh of his brother when dead? You would detest it. And fear Allah; indeed, Allah is Accepting of repentance and Merciful.” [Quran: 49:11-12]

3. Sanctity and Security of Private Life:

The Quran has laid down the injunction stating: “…And do not spy or backbite each other…” [Quran: 49:12] “O you who have believed! Do not enter houses other than your own houses until you ascertain welcome and greet their inhabitants…” [Quran: 24:27]

4. The Security of Personal Freedom:

Islam has laid down the principle that no citizen can be imprisoned unless his guilt has been proven in an open court. To arrest a man only on the basis of suspicion and to throw him into a prison without proper court proceedings and without providing him a reasonable opportunity to produce his defence is not permissible in Islam.

5. The Right to Protest against Tyranny:

Amongst the rights that Islam has conferred on human beings is the right to protest against a government's tyranny. Referring to it Allah, He says: “Allah does not like the public mention of evil except by one who has been wronged...” [Quran: 4:148]

In Islam, all power and authority belongs to Allah Alone; man is only delegated a part of that power which becomes a trust. Everyone who becomes the recipient of such a power has to be accountable before his people, for whose sake he will be called upon to use these powers. This was acknowledged by Abu Bakr, may Allah be pleased with him, who said in his very first address: “Cooperate with me when I am right but correct me when I commit error. Obey me so long as I follow the commandments of Allah and His Prophet

but turn away from me when I deviate.”

Islam gives the right of freedom of thought and expression to all citizens of the Islamic state on the condition that it should be used for the propagation of virtue and truth, and not for spreading evil and wickedness. The Islamic concept of freedom of expression is much superior to the one prevalent in the West. Under no circumstances would Islam allow the propagation of evil and wickedness. It also does not give anybody the right to use abusive or offensive language in the name of criticism. It was the practice of the Muslims to enquire from the noble Prophet

Islam has also given people the right to freedom of association and formation of parties or organisations. This right is also subject to certain general rules.

8. Freedom of Conscience and Conviction:

Islam has laid down the injunction; Allah says: “There shall be no compulsion in [acceptance of] the religion...” [Quran: 2:256] On the contrary, totalitarian societies absolutely deprive the individuals of their freedom. Indeed this undue exaltation of the State authority postulates a sort of slave-like servitude on the part of man. At one time slavery meant total control of man over man - now that type of slavery has been legally abolished, but in its place totalitarian societies impose a similar sort of control over individuals.

Along with the freedoms of conviction and conscience, Islam has given the right to the individual that his religious sentiments will be given due respect, and nothing will be said or done which may encroach upon his right.

Islam also recognises the right of the individual that he will not be arrested or imprisoned for the offences of others. The Quran has laid down this principle clearly as in the saying of Allah: “…And no bearer of burdens will bear the burden of another...” [Quran: 6:164]

11. The Right to Basic Necessities of Life:

Islam recognised the right of the needy people, that help and assistance be provided to them. Allah says: “And in their wealth there is acknowledged right for the needy and the destitute.” [Quran: 70:24-25]