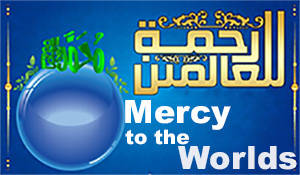 was the kindest of men in the same way as he excelled all others in courage and valor. Being extremely kind-hearted, his eyes brimmed with tears at the slightest sign of inhumanity. A Companion, Shaddad bin 'Aws, may Allah be pleased with him, narrated that the Prophet

"Verily, Allah has prescribed Al-Ihsan (i.e. performing an action in a perfect and kind manner) towards everything. Thus, if you kill (anyone for some justified reason), kill (him/her) humanely; and when you slaughter (an animal), slaughter (it) in a good way. So, each one of you should sharpen his blade and let the slaughtered animal die comfortably." [Muslim]
Ibn 'Abbas, may Allah be pleased with him, narrated that a man threw a goat on its side and then started sharpening his knife. When the Prophet

saw him he said: “Do you want to kill it twice? Why did you not sharpen the knife before throwing it on the ground?”

A Mercy for the Believers

The Messenger’s compassion towards the believers was of the utmost degree. The Quran describes his compassion in the following verse, which means: “There has certainly come to you a Messenger from among yourselves. Grievous to him is what you suffer; [he is] concerned over you [i.e. your guidance] and to the believers is kind and merciful.” [Quran: 9:128]

Sa‘d ibn ‘Ubadah, may Allah be pleased with him, once became ill, so Prophet

visited him in his house. On seeing his faithful Companion in a pitiful state, he was moved to tears. Then, he said: “Allah does not punish because of tears, nor because of grief, but He punishes because of this." -, and he pointed to his tongue. [Al-Bukhari]

A Mercy towards his Enemies

The prisoners of war taken captive at the battle of Badr were amongst his bitterest enemies. Nevertheless, he

made sure that they were given the best of treatment. Among them was Suhayl ibn ‘Amr who was a fiery speaker and was denouncing the Prophet

. 'Umar, may Allah be pleased with him, one of the Prophet’s closest companions, suggested that two of his lower teeth be pulled out so that he might not be so vile in his speeches. The Prophet

replied: “Were I to do this, Allah would disfigure me on the Day of Judgement, despite the fact that I am His messenger.”

In Makkah, his people inflicted him with every kind of suffering, eventually forcing him to migrate to Madeenah, and then waged war on him for five years. However, when he conquered Makkah without bloodshed in the twenty-first year of his Prophethood, he asked the unbelievers in Makkah who were awaiting his decision about them: “How do you expect me to treat you?” They responded unanimously: “You are a noble one, the son of a noble one.” He announced to them his decision:

“You may go free! No reproach this day shall be on you; may Allah forgive you.”

A Mercy for Women

was also very kind and affectionate towards women. Women were very badly treated in those times. The Noble Prophet

gave them honor and dignity at par with men in the community. 'Umar, may Allah be pleased with him, reported: “We did not have much regard for women while we were in Makkah, but they were better treated in Madeenah. Allah's Messenger established women's rights through his sayings and commandments, which improved their position and status.”

A Mercy for Children

was particularly compassionate towards children. When he saw a child crying, he sat beside him or her and shared his or her feelings. He felt the pain of a mother for her child more than the mother herself. Once he said: “I stand in prayer and wish to prolong it. However, I hear the cry of a child and cut the prayer short for the anxiety which the mother is feeling.” [Al-Bukhari]

He would take children in his arms and embrace them. He was once hugging his beloved grandsons, Hasan and Husayn, when Aqrah ibn Haabis told him, ‘I have got ten children. So far, I have not kissed any one of them.’ Allah’s Messenger

responded: “The one who does not teat others with mercy will not be treated mercifully.” [Al-Bukhari and Muslim]
According to another version, he said: “What can I do for you if Allah has removed from you the feeling of compassion?” [At-Tirmithi]

A Mercy for Slaves

strongly enjoined the duty of kind and generous treatment upon slaves, servants and laborers engaged in manual work. Jabir, may Allah be pleased with him, related that the Prophet

said: “Feed them with the food which you eat, clothe them with such clothing as you wear, and do not cause trouble to Allah's creatures.” The Apostle

also said: “Those whom Allah has made your dependents are your brothers, servants and helpmates. Anybody whose brother has been made subservient to him ought to feed him with the food he eats and clothe him with the clothes he wears; he should not command him to do that which he is unable to do, and if it becomes necessary to do so, then he should help him in doing the job.”

A Mercy for Animals

His compassion encompassed not only human beings, but also animals.

forbade his companions to keep the unintelligent creatures hungry or thirsty, to disturb or to overburden them. He commended that kindness and putting them at ease were meritorious acts tending to bring man closer to Allah. Abu Hurayrah, may Allah be pleased with him, narrated that the Prophet

said: "A traveler who was thirsty saw a well on his way. He got inside the well and when he came out he saw a dog licking mud due to thirst. The man realized that the dog was as thirsty as him, so he got into the well again, filled his leather sock with water and carried it out holding it with his teeth. Thus, he quenched the thirst of the dog. Allah was pleased with this act of kindness and pardoned his sins." The Companions asked: “O Messenger of Allah, is there recompense in the matter of beasts and wild animals also?” The Prophet

replied: “There is recompense in regard to every creature that has a living heart.”

'Abdullah ibn 'Umar, may Allah be pleased with him, related that the Prophet

said: “A woman was punished and entered Hellfire because she kept a cat in captivity until it died, she neither fed it nor gave it water to drink; nor did she set it free so that it could eat from the vermin of the earth.” [Al-Bukhari and Muslim]

Once on return from a military campaign, few Companions took away the chicks of a bird from their nest to stroke them. The mother bird came back and when it could not find its chicks in the nest, it began to fly around screeching. When informed of the matter, Allah’s Messenger

became angry and ordered the chicks to be put back in the nest. [Abu Daawood]

The love and compassion of Allah’s Messenger

for all kinds of creatures was not of the kind claimed by today’s ‘humanists’. He was sincere and balanced in his love and compassion. He was more compassionate than any other person. He was a Prophet raised by Allah, the Creator and Sustainer of all beings, for the guidance and happiness of conscious beings - mankind and jinn - and the harmony of existence. Therefore, he lived not for himself but for others; he is a mercy for all the worlds.