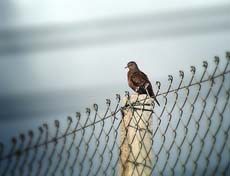 Thereupon I asked him:
" How do you say that I am not a freethinker?"
"Because you believe in nonsense that has no existence at all," he told me.
"And you? What do you believe in? What do you think created universe and life?" I asked him.
"Nature!"
"But what is Nature?"
"It is the secret power that is limitless but has got manifestations which can be perceived by the sense organs," he said.

At this I said: "I understand by this statement of yours that you prevent me from believing in an Unknown Power because you want me to believe in another equally unknown power. But the question is that why should I disown my God for the sake of another equally unknown but false god, especially in the one I find peace, tranquillity and comfort, whereas the false god of Nature neither answers my call, nor comforts me?"

Misled by the history of European liberalism they overlook the fact that if certain local circumstances necessitated the spread of atheism in this does not mean that the same thing should happen everywhere in the world.

There is no doubt that the image of Christianity as presented by the church in Europe with its suppression of science, torturing of scientists and passing on a set of lies and superstitions in the name of the word of God drove the free thinkers of Europe to atheism. The intellectuals of had to choose between two irreconcilable attitudes: the natural belief in God or the belief in theoretical and practical scientific facts.

The European intellectuals found in Nature a partial escape from the dilemma. So they said to the church: 'Take back your God in whose name you enslave us and impose on us burdensome exactions and subject us to tyrannous dictatorship and superstitions. The belief in your God wants us to lead the ascetic life of hermits and recluses; we refuse to do your bidding. We shall, therefore, have a new God who possesses most of the qualities of the first God but who has no church to enslave us, nor does He impose on us any moral, intellectual or materialistic obligations as your God does'.

But in Islam there is no such thing as may drive people to atheism. There are no dilemmas which puzzle the mind. There is only one God; He has created all beings and all will return to Him. It is a clear and simple concept, which even the naturalists, and atheists may find hard to reject or doubt.

In Islam, there are no churchmen such as the European church had. Religion is the common property of all, and every Muslim is entitled to benefit from it as much as his natural, spiritual and intellectual equipment may permit. All people are equal and they are treated, as they deserve to be, in the light of their deed in life. The most honoured of all people are the God-fearing individuals whether they are engineers, teachers, workmen or craftsmen. Religion is not, however, one of these so many occupations. There are no professional churchmen in Islam, so that Islamic worship is observed without the intercession of a churchman.

Still, it is necessary that some people should specialise in the study of jurisprudence and law on which public order is based. The status such specialists in Islamic jurisprudence and constitutional law enjoy is not more than that which their counterparts in other countries do. They are not entitled to any authority or class prestige over the people. They are just the jurisprudents and counsels of the state. It may be pointed out here that Al-Azhar is a religious institute but it does not have, as the churchmen did, the authority to burn or torture people.

When the Islamic rule is established, the 'Ulamaa' (Islamic scholars) will not automatically become the governors or ministers or head of departments. The only change is that the system of rule will be based on Islamic Sharee'ah (law) - the law of God. The engineers will continue to be charged with the engineering works, the doctors will be responsible for medical affairs, the economists will direct the economic life of the community with the only change that the Islamic economy alone will then provide them with the guidelines.

History bears witness that neither the Islamic faith nor its system of rule ever came into conflict with science or the application of its theories. No scientist in Islam has ever been burnt or tortured for discovering or announcing a scientific fact. True science is not in conflict with the Islamic faith and the belief that God created everything. Islam calls on people to study space and earth and to meditate on their creation in order to discover the existence of God. It should be remembered that many Western scientists who did not believe in God came to discover His existence through proper scientific research.

There is nothing in Islam which may drive people to atheism. The advocates of atheism in the East are but blind followers of their erstwhile colonialist masters. They want to be given the freedom to attack the faith and all kinds of worship and to urge people to abandon their religion. But why do they want such freedom? In people sought to attack religion in order to liberate their minds from superstition and to free people from oppression and tyranny.

If Islamic faith already gives them all the freedom they need to have or they clamour for, why should they attack it? The truth is that these so-called liberals are not interested in the freedom of thought but are rather more interested in spreading moral corruption and uncontrolled sexual anarchy. They use freedom of thought as a mask to hide their base motives. It is no more than a camouflage in their hideous war against religion and morality. They are against Islam not because it restricts freedom of thought but only because it stands for the liberation of mankind from the dominance of its baser passions.

The advocates of "free thinking" allege that the Islamic system of rule is dictatorial because the state has vast powers. The worst of it, they say, is that the state enjoys immense power and authority in the name of the faith which has a very great attraction for the people. So they blindfoldly subject themselves to its tyrannical rule. Thus, they conclude, these vast powers lead to dictatorship and the common people are made slaves with no right to think for themselves. Freedom of thought is lost forever. None dare challenge the rulers and he who does is accused of rebellion against religion and God.

These false accusations are best refuted by referring to these verses of the Holy Quran; Allah says what means: "…And their affair is [determined by] consultation among themselves…" [Quran: 42:38] and: "…And when you judge between people to judge with justice..." [Quran: 4:58]

Abu Bakr, may Allah be pleased with him, the first Caliph, said: "Obey me so long as I obey God and His Prophet. But if I disobey God or the Prophet I shall no longer be entitled to your obedience."

'Umar, may Allah be pleased with him, addressed the Muslims saying: "Put me right if you discover any crookedness in me." One of the audience retorted: "By God Almighty! If we had found any crookedness in you, we will put you right with our swords."

No one would defend dictatorship; no man of free intellect and conscience would approve of it. But any noble principle can be exploited and used as a mask to hide personal ambitions. The French Revolution witnessed the most heinous crimes being committed in the name of liberty. Hundreds of innocent people have been imprisoned, tortured or murdered on behalf of the constitution.

Should all constitutions be annulled then? Oppression and tyranny dominated some countries in the name of religion. Should we, therefore, abandon all religions? It would be right to abandon religion if religion as such were to advocate oppression and injustice. This cannot be said of Islam, which established the noblest examples of pure justice and equity, not only among the Muslims themselves but between Muslims and their fatal enemies as well.

Tyranny is best fought by teaching the people to believe in God and to respect freedom, which is defended and safeguarded by religion. Such people would not allow the ruler to commit injustice, but will keep him within the limits of his legal powers. I do not think that any system has ever aimed at the establishment of justice or the opposition of tyranny as much as Islam did. Islam made it a duty of the people to put the ruler right if he is unjust with the condition that no bigger calamity occurs as a result of trying to execute the change. The Prophet

said: "He who witnesses any vice should change it." He also said: "A word of justice uttered before an unjust ruler is the greatest of Jihaad (holy war)."

In conclusion, we would like to drop a word of advice to these "progressive free thinkers". The true way of liberation is not the abandonment of religion but in giving people the revolutionary spirit which abhors injustice and rectifies the unjust. This spirit is essentially the spirit of the Islamic people.

[From: 'Islam, the Misunderstood Religion']