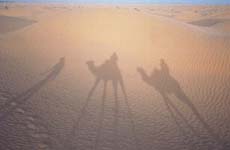 Islam, in the tenth century, was the main religion, or at least, the religion of the majority of nations in an area covering more than half of the civilized world stretching over three continents from the Pyrenees and Siberia in West and North Europe to the farthest end of Asia, up to China and New Guinea in the East; from Morocco in North Africa to the southern tip of , covering two-thirds of the African continent. It is one of the most striking facts of human history that the spread of Islam over such a vast area took place within three centuries. Most striking of all, within half a century after the Hijrah (Prophet Muhammad's Migration from Makkah to Al-Madeenah), Islam had already conquered the whole of North Africa from Egypt to Morocco, all the Middle Eastern lands from Yemen to Caucasia and from Egypt to the lands beyond Transoxiana (portion of Central Asia corresponding approximately with modern-day Uzbekistan and southwest Kazakhstan). It was during the reign of the third Caliph 'Uthmaan, may Allah be pleased with him, that the Muslim envoys reached the Chinese Palace, where they were welcomed enthusiastically, an important event marking, according to the historians, the beginning of Islam's entry into this country. There are many reasons why nations have been, from past to the present, so ready to embrace Islam, what is pointed out by Muhammad Asad, a Jewish convert to Islam, probably being the foremost:

Islam appears to me like a perfect work of architecture. All its parts are harmoniously conceived to complement and support each other, nothing lacking, with the result of an absolute balance and solid composure. Everything in the teaching and postulate of Islam is in its proper place. (Islam at the Crossroads, p.5)

Islam was spread by force of the sword

Most of Western writers, especially under the influence of the Church, have never failed to accuse Islam of spreading by force of the sword. The causes of this prejudice lie mainly in the fact that the spread of Islam has often occurred at the expense of Christianity. While Islam has, for centuries, obtained numerous conversions from Christianity without much effort or organized missionary activities, Christianity has almost never been able to achieve conversions from Islam in spite of sophisticated means and well-organized missionary activities, and it has always been at a disadvantage in its competition with Islam for fourteen centuries. This has caused its missionaries and most of the orientalists to develop a complex within themselves by depicting Islam and introducing it as a regressive, vulgar religion of savage people. The same attitude has unfortunately maintained toward the Holy Prophet of Islam. This is clear in the confessions of some unbiased writers of the West: According to P. Bayle,

Muslims, according to the principles of their faith, are under an obligation to use force for the purpose of bringing other religions to ruin (probably he means Jihaad which is not for the purpose he suggests); yet, in spite of that, they have been tolerating other religions for some centuries past. The Christians have not been given orders to do anything but preach and instruct, yet, despite this, from time immemorial they have been exterminating by fire and sword all those who are not of their religion […] We may feel certain that if Western Christians, instead of the Saracens and the Turks, had won the dominion over Asia, there would be today not a trace left of the Greek Church, and that they would never have tolerated Muhammadanism as the 'infidels' have tolerated Christianity there. We (Christians) enjoy the fine advantage of being far better versed than others in the art of killing, bombarding and exterminating the Human Race." (Bayle P., Dictionary, 'the article Mahomed', 1850)

To what is Islam indebted its unequaled spread?

Islam is indebted its unequaled spread to its religious content and values, which is confessed by all objective Western intellectuals:

Many have sought to answer the questions of why the triumph of Islam was so speedy and complete? Why have so many millions embraced the religion of Islam and scarcely a hundred ever recanted? Some have attempted to explain the first overwhelming success of Islam by the argument of the Sword. They forget Carlyle's laconic reply. First get your sword. You must win men's hearts before you can induce them to imperil their lives for you; and the first conquerors of Islam must have been made Muslims before they were made fighters on the Path of God. Others allege the low morality of the religion and the sensual paradise it promises as a sufficient cause for the zeal of its followers: but even were these admitted to the full, no religion has ever gained a lasting hold upon the souls of men by the force of its sensual permissions and fleshy promises...

In all these explanations the religion itself is left out of the question. Decidedly, Islam itself was the main cause for its triumph. Islam not only was at once accepted (by many peoples and races) by Arabia, Syria, Persia, Egypt, Northern Africa and Spain, at its first outburst; but, with the exception of Spain, it has never lost its vantage ground; it has been spreading ever since it came into being. Admitting the mixed causes that contributed to the rapidity of the first swift spread of Islam, they do not account for the duration of Islam. There must be something in the religion itself to explain its persistence and spread, and to account for its present hold over so large of a proportion of the dwellers on the earth... Islam has stirred an enthusiasm that has never been surpassed. Islam has had its martyrs, its self-tormentors, its recluses, who have renounced all that life offered and have accepted death with a smile for the sake of the faith that was in them. (Stanley Lane-Poole, Study in a Mosque, pp.86-89)

A. J. Arberry has also pointed out that the reason for the spread of Islam is Islam itself and its religious values. (Aspects of Islamic Civilization, p.12) He states:

The rapidity of the spread of Islam, noticeably through extensive provinces which had been long Christian, is a crucial fact of history […] The sublime rhetoric of the Quran, that inimitable symphony, the very sounds of which move men to tears and ecstasy". (M. Pickhtal, The Meaning of the Glorious Quran, p.vii)

This, and the urgency of the simple message carried, holds the key to the mystery of one of the greatest cataclysms in the history of religion. When all military, political and economic factors have been exhausted, the religious impulse must still be recognized as the most vital and enduring.

Brockelman, who is usually very unsympathetic and partial, also recognizes the religious values of Islam as the main factor for the spread of Islam. (History of the Islamic Peoples, p.37) Rosenthal makes his point as follows:

The more important factor for the spread of Islam is religious law of Islam (Sharee'ah which is an inclusive, all-embracing, all-comprehensive way of thinking and living) which was designed to cover all manifestations of life. (Political Thought in Medieval Islam, p.21)

How was Islam spread? - II