The Muslim-Christian dialogue - I 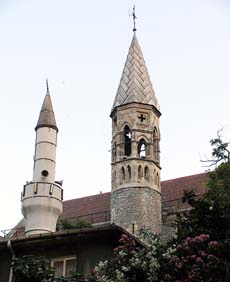 Allah Almighty has perfected for us our religion, and completed upon us His favour and has chosen Islam to be our religion. Our belief in His Oneness and in the Messengers whom He sent to His creation is a part of our Islamic creed.

For some time, Muslims and Christians lived together in harmony. Muslims have always been committed to the glorious principles laid in Islam and stated in the Holy Quran; Allah says what means: "There shall be no compulsion in [acceptance of] the religion ..." [Quran: 2:256], and "For you is your religion, and for me is my religion." [Quran: 109:6] Unfortunately, the Jews succeeded in poisoning this cordial relationship and in instigating disorder whenever possible.

Discussions, argumentation, encounters and accusations arose, and this and other reactors led to the following well-known three expressions in this Muslim and Christian context: Dialogue, Christianisation, and persecution.

In its practice of Christianisation, or missionary work, the Christian West resorted to unlawful means crowned by western imperialism of Muslim states. This imperialism was effectively doing lip service to missionary work. Missionaries succeeded in camouflaging imperialists' goals. Their evangelism was introduced in combination with food, dress, medicine and book. In the aftermath of the collapse of communism in Muslim Albania, Muslims tired out therein by hunger, were handed the Bible together with food!

Military imperialism came to an end, only to be replaced by cultural and economic invasion. Many among us are now adopting the Westerners' mentality, priding themselves in speaking their languages, importing their way of life, modelling themselves after them and praising their culture!

Persecution is a big lie being an illusion created by those Christians who are hiding their real motives. However, Allah says what means: "…And Allah is predominant over His affair, but most of the people do not know ..." [Quran: 12:21]

The Vatican was so enthusiastic for an Islamic-Christian dialogue that it founded a special office in 1967 called: "The Papal Council for Inter-religious Dialogue."

Though the ultimate goal of this dialogue is to bolster the effectiveness of religion, deepening its spiritual hold in the family and society and bringing back absent principles and values, the 's Church totally missed the point of proper dialogue when it declared that dialogue serves at the end of missionary work. This meant opening up of new horizons to evangelise Muslim societies through dialogue!

Consequently, we, in the following, mention a specimen for Muslim-Christian dialogue showing vividly the extent of the Jews' control over Christian thinking in both the West and the .

Dr. Uksha, a Jordanian Christian responsible for Islamic affairs at the Papal Council – Vatican, said: "I request that the colleagues in the Islamic delegation be patient because of our repeated questioning of Saudi Arabia's prevention of building churches on its soil, in spite of the fact that there is now around half a million Catholics together with a similar number from other Christian denominations (in that country). This prevention leads us to the belief that the Christian minority in is deprived from its religious rights and from performing its worship unlike Muslim Minorities in the Christian West."

The above query was replied to as follows:

1. "We assure our colleague, Dr. , and all other members of the Catholic delegation that repetition of this query neither embarrasses nor annoys us. The aforementioned prevention is non-negotiable, being a matter of principle. This is a case of faith which has been clearly expounded in our Islamic system according to the Holy Quran and the Sunnah.

2. In reply to this query, we have always confirmed that we Muslims, and you also at the Catholic Church, believe that each faith should have its geographical exclusivity, which no other faith would share. This is in order that complete freedom and independence would be guaranteed for such a faith on its soil.

For instance, you have geographical exclusivity for Catholicism within the . Further, you have proclaimed that the is the state of Catholic denomination, and patron of its followers worldwide. To ensure the freedom and exclusivity of Catholicism, you prevented any coexistence within the of any other faith or denomination. Moreover, you even disallowed building of churches there affiliated to Protestants, Orthodox and others, let alone building a single mosque for Muslims.

Similarly, we Muslims apply this sound principle condoned by our Islamic law. In his traditions, our Prophet

(may Allah exalt his mention) confirmed that the entire represents geographical exclusivity for the Islamic faith. No other faith should coexist with it within the same area. This allows full freedom for our religion, whereas outside the peninsula, churches are built adjacent to mosques in the Muslim lands. Therein, Christians are enjoying their full religious and national freedom.

The Leader of the Faithful, the second Caliph 'Umar bin Al-Khattaab, may Allah be pleased with him, refrained from entering the 'Resurrection Church' to pray in and said: "I fear that Muslims would say: here is the place 'Umar prayed… and turn this place into a mosque."

As you may know, this Church's keys are until now kept with a Muslim family as a result of an accord reached by Christian denominations regarding this matter to end the feud which ensued regarding who would be honoured with the possession of its keys.

We have no wish to argue with you concerning your claim that in Saudi Arabia there are one million subjects affiliated to different Christian denominations, out of which there are half a million Catholics. This figure is very much exaggerated and needs utmost accuracy. We, however, would like to confirm that in there is not a single non-Muslim who acquires permanent residence.
All non-Muslims, including Christians and others, have entry visas to carry out temporary work. Their work contracts stipulate that they should respect norms and laws of the State. As it is known, all parties of the contract are bound by its context. Consequently, if a non-Muslim feels that the non-existence of a church is going to represent a religious problem for him, then he is free not to continue his work.