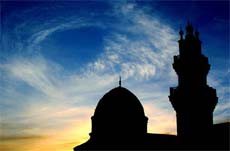 In reply to your demand to allow Christians in Saudi Arabia to both perform their prayers and build churches in the same manner Muslim minorities are given such religious freedom, we would like to call your attention to a great deal of fallacy in this comparison:

1. Muslim minorities in the West are mostly indigenous. A significant part of their population acquired citizenship while the rest are permanently-residing landed immigrants. It is a fallacy, therefore, to compare work groups contracted for a limited period and subject to conditions of their contracts with the indigenous Muslims or those who have acquired citizenship in the West.

3. Another fallacy appears in your saying that the Muslims in , the cradle of the Catholic Denomination, were permitted to build a large mosque and cultural centre and this would require that Muslims would act in kind. is the capital of and is neither a capital of the nor a part of its geographical exclusivity. What is acceptable is a comparison between and , for instance, where churches and Papal Councils are in and . Comparisons can be made also with , , and many Muslim counties.

4. You have also asked the following question: "Are some Gulf countries as well as not but a part of the and, therefore, a part of the geographical exclusivity of Islam? If the answer is in the affirmative, then why have Muslims of these countries accepted churches being built on their territory? Does this not mean that exclusivity is a Saudi understanding not shared by the rest of Muslims even in neighbouring countries?"

Indeed and the Gulf countries form a part of the and, thus, are included in the geographical exclusivity of Islam. These countries have the same firm belief as the Saudis in this principle but, unlike , they at a certain time of their history were subjected to British and other imperialism and thus became unable to have their suzerainty over their own religious and political affairs. In such circumstances, imperialism, in a direct challenge to the will of their people, built these churches out of its wish to reaffirm its political presence through a reaffirmation of its religious presence.


5- How do you justify the American Congress' decision of making Jerusalem an eternal capital for Israel as a result of the large demonstration organised by the American Churches including Catholic and non-Catholic ones? About one million of these churches' followers participated in the above demonstration. Consequently, how do you want us to understand this integration between the Church's attitude and that of the Congress? Is this not a clear demonstration of hatred to Islam and Muslims as far as their most immediate affairs are concerned? The did not issue any denunciation regarding this damaging stance about the Muslims of the world, which constitutes a flagrant attack on the rights of Palestinian Christians and Muslims. Is this not a clear alignment with the increasing Jewish aggression and injustices?

6- Had it not been that you opened up this venue of dialogue, we would not have reacted in kind. However, we are fully prepared to present the many examples of wrongs in the Christians' stance about Islam and Muslims. We are equally prepared to answer all your written questions. We have no feeling of embarrassment vis-à-vis any query, be it religious, cultural or historical. We hope that you have same level of preparedness and non-embarrassment with regards to any questions addressed to you about your religious values or your past and present attitudes about Islam and Muslims.