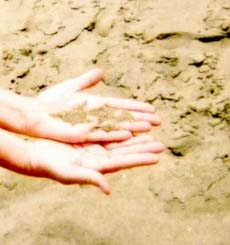 Literally, the Arabic word Tayammum means an 'aim or purpose'. In Islamic Law, it refers to: 'Aiming for or seeking soil to wipe one's face and hands with the intention of preparing oneself for prayer, and so on."

This way of purification is resorted to only in limited cases, such as lack of water, difficulty in using it for one reason or another, etc. Being an alternative for ablution, the same acts of worship done after it are the same as those done after making ablution and, in addition to the presence of water, everything that nullifies ablution nullifies it.

If a person prays after performing Tayammum and then finds water, he does not need to repeat his prayer even if there is time left to do so. Abu Sa'eed al-Khudri, may Allah be pleased with him, said: "Two men went out on a journey. The time of prayer came and, as they had no water, they performed Tayammum. Then they found some water during the time of the same prayer. One of them repeated his prayer with ablution and the other did not. When they saw the Messenger of Allah

they asked him about the proper procedure in such a case. He

said to the one who did not repeat his prayer: "You have acted according to the Sunnah (i.e., prophetic tradition, practice or approval) and your prayer is sufficient for you." He

said to the other: "You will get a double reward." [Abu Daawood and An-Nasaa'i]

If one finds water before he prays or finishes his prayer with Tayammum, his prayer becomes null and void, for such a person must make ablution with water. If a person is not clean because of sex or a wet dream, or a woman has just finished menstruating, and they pray after performing Tayammum, they need not repeat their prayer after finding water, but they must perform Ghusl (ritual bathing) with water when they can. 'Umar Ibn Al-Khattaab, may Allah be pleased with him, said: "The Prophet

once led the people in prayer, and afterwards saw a man who had not prayed. He asked: "Why did you not pray with us?" The man replied: 'I was in a post-discharge state and there was no water.' He told him: "Use soil (for purification) and it will suffice." [Al-Bukhari]

It is permissible to wipe over any wrapper, or diseased or injured body part. There are many narrations on this matter, and although they are all weak, their many chains strengthen each other, making them valid to relate. One relates a story about a man who was on a journey and suffered an injury. While he slept, he had a wet dream, after which he asked his companions if he could perform Tayammum. They said he could not, so he took a bath and consequently died.

When this incident was mentioned to the Prophet

he exclaimed, "They killed him, may Allah kill them! Do you not ask about what you do not know? ... It would have been enough for him to perform Tayammum and wrap his wound, then to wipe it and wash the rest of the body." [Abu Daawood, Ibn Maajah & Ad-Daaraqutni]

In fact, it is obligatory to wipe over such casts or wrappers in ablution or whilst taking a bath instead of washing the injured parts. This must be done even if one has to heat the water. But, if he believes that this would harm the diseased or injured part, or that his condition may worsen, then he may wipe the injured part with a little water. If he fears that this would also be harmful, he should wrap it and then gently wipe over it. It is not necessary for him to be in a state of purity while applying the cast or wrapper to be wiped. There is also no time limit prohibiting such wiping, for he can do so as long as his condition lasts. Removing the wrapper or cast nullifies the wiping, as does the final cure.

To sum up, Tayammum is an alternative procedure in case water is not accessible or may be harmful if used for any reason. This ease of hardship is a sort of permission or help from Allah Almighty to His worshippers. Allah Says in the Noble Quran (what means): "…Allah does not intend to make difficulty for you, but He intends to purify you and complete His favour upon you that you may be grateful." [Quran 5:6]