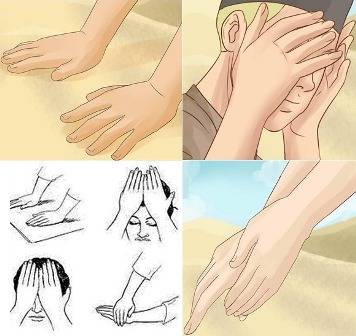 In Arabic, the word Tayammum literally means an 'aim' or 'purpose.' In Islamic Law, it refers to: 'Aiming for or seeking soil to wipe one's face and hands with the intention of purification and preparing oneself to pray, and so on."

Proof of its Legitimacy

This act of ritual cleansing is proven by the Quran, Sunnah (prophetic tradition) and Ijmaa' (consensus of Muslim scholars). The Quran says (what means): "…And if you are ill or on a journey or one of you comes from the place of relieving himself or you have contacted women [i.e., had sexual intercourse] and find no water, then seek clean earth and wipe over your faces and your hands [with it]. Indeed, Allah is ever Pardoning and Forgiving." [Quran 4:43]

From the Sunnah, we have the Hadeeth (prophetic statement) related by Abu Umamah

in which the Prophet

said: "All of the earth has been made a pure place of prayer for me and my nation. Whenever a person from my nation wants to pray, he has something with which to purify himself, that is, the earth." [Ahmad]

Finally, there is a consensus that Tayammum forms a legitimate part of the Sharee'ah (Islamic Law), as it replaces ablution with water or Ghusl (ritual bathing), under specific circumstances.

A Blessing from Allah

This form of ablution is viewed as a blessing from Allah to the Muslims. Jabir

said: "I have been given five things that were not given to anyone before me: I have been made victorious due to fear of a distance of one month's journey; the earth has been made a place of prayer for me and a source of purification - wherever and whenever any member of my nation wants to pray, he may pray; and the war booty has been made lawful to me, and this was not lawful to anyone before me. I have been given permission to intercede. Prophets before me used to be sent to their own people only, but I have been sent to all of mankind." [Al-Bukhari & Muslim]

When to Make Tayammum

One is permitted to make Tayammum in any of the following cases:

said: "We were with the Messenger of Allah

during a journey. When he led the people in prayer, one man stayed apart. He

asked him: "What prevented you from praying?" He replied: 'I need a ritual bath (because of having a wet dream) and there is no water.' The Messenger

2- If one is injured or ill

If one is in this condition and thinks that using water will worsen it (he does not have to be absolutely sure, but may base his assumption on past experience or what a knowledgeable person has told him), he may perform Tayammum.

said, "We were on a journey and one of us was injured. Later, he had a wet dream. He asked his companions, 'Can I perform Tayammum?' They said, 'No, not if you have water.' He performed Ghusl, which caused him to die. When news of this came to the Messenger of Allah

he said: "They killed him! May Allah kill them! Do you not ask if you do not know? The remedy for ignorance is to ask. He could have performed Tayammum and not dropped water on his wound, or wrapped it with something, then wiped over the wrapping, and then washed the rest of his body.""

3- If water is cold enough to physically harm the user

Tayammum is allowed when water is available but is too cold and cannot be heated, or there is no public bathroom available. 'Amr Ibn Al-'Aas

narrated that he was once participating in a military expedition. He had a wet dream during an extremely cold night, and was afraid that if he performed Ghusl he would die. He prayed the morning (Fajr) prayer with his companions. He then went to the Messenger of Allah

to ask him about this. The Messenger

said: "O 'Amr! Did you pray with your companions while you needed a ritual bath?" 'Amr said to the Prophet

the verse (which means): "…Do not kill yourselves [or one another]. Indeed, Allah is to you ever Merciful." [Quran 4:29] The Prophet

smiled at this and did not say anything. [Al-Bukhari]

4- If water is nearby, but one cannot fetch it due to fear

If one fears for his life, family, wealth, [for example, if an enemy (beast or human) is nearby or if one is a prisoner, and so on], he may perform Tayammum. This is also allowed if there is water but one lacks the proper means to get it, or if one fears some accusation against him if he gets it.

5- If one is saving his water for later use

This could be for dough, cooking, or to remove an impurity that is not pardonable. Imam Ahmad

said: "Many of the Companions performed Tayammum to save their water for drinking." 'Ali

said: "A man who is travelling and becomes unclean because of sexual intercourse, or a wet dream, can perform Tayammum if he fears he will go thirsty. He should perform Tayammum and not Ghusl." [Ad-Daraqutni]

6- If one can get water, but fears that the prayer will be over by the time he gets it

He can perform Tayammum and pray, and does not need to repeat his prayer (after he gets water).

The Soil Used for Tayammum

It must be pure soil: this can be sand, stone, gypsum, and so on. Allah Almighty Says in the Quran (what means): "…Perform Tayammum with pure soil..." [Quran 5:6] and all scholars of the Arabic language agree that 'soil' (in Arabic) is whatever covers the earth, dirt or otherwise.

How to Perform Tayammum

First, one must have the intention to perform ablution and purifying himself, then he mentions Allah's name, strikes the soil with his hands, and wipes his face and hands up to the wrist, starting with the right hand. Nothing is more authentic and clear than what 'Ammar

related. He said: "I once became sexually impure and had no water, so I rolled in the dirt and prayed. This was mentioned to the Prophet

who said: "This would have been enough for you," and he struck the earth with his hands, blew in them and then wiped his face and hands with them." [Al-Bukhari & Muslim]

This Hadeeth shows that one strike of the earth is sufficient, and one only wipes the arms to the wrists. It is an act of Sunnah that one who makes Tayammum with dirt should blow into his hands first and not make his face dusty or dirty.

After performing Tayammum, one is pure and may perform any of the acts requiring prior ritual purification, such as praying and touching the Quran. He does not have to perform it during the time of prayer, and he may pray as many prayers as he wishes (unless he nullifies it), exactly as it is the case with regular ablution. Abu Tharr

said: "The soil is a purifier for a Muslim, even if he does not find water for ten years. Then, if he finds water, that is, to make ablution, and so on, it becomes incumbent upon him to use it." [Ahmad & At-Tirmithi]