The month of Sha’baan - I 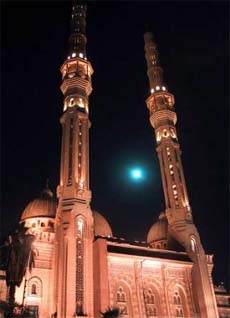 fasting for an entire month except in Ramadan, and I never saw him fast more than he did in Sha’baan.” [Al-Bukhari and Muslim]

did not fast any entire month apart from Ramadan.”

regarded it as disliked to fast any entire month apart from Ramadan. Ibn Hajar

observed more voluntary fasts in Sha’ban than in any other month, and he used to fast most of Sha’ban.”

said: “I said: ‘O Messenger of Allah, I do not see you fasting in any other month like you fast in Sha’ban.’ He

said: ‘That is a month to which people do not pay attention, between Rajab and Ramadan, and it is a month in which deeds are lifted up to the Lord of the Worlds. I like for my deeds to be lifted up when I am fasting.’” [An-Nasa'ee]

said: “Fasting in Sha’ban is better than fasting in the Sacred Months, and the best of voluntary fasts are those that are (observed in the months) closest to Ramadan, before or after. The status of these fasts is like that of Al-Sunan Al-Rawatib (optional prayers which the Prophet

The phrase “Sha’ban is a month to which people do not pay attention, between Rajab and Ramadan” indicates that because it comes between two important months, the sacred month of Rajab and the month of Ramadan, people are preoccupied with those two months and they do not pay attention to Sha’ban. Many people think that fasting in Rajab is better than fasting in Sha’ban, because Rajab is one of the Sacred Months, but this is not the case.

In the narration quoted above there is an indication that even though certain times, places and people may be commonly thought to posses a particular virtue, there may be others that are better than them.

It also indicates that it is commendable to make good use of the times when people tend to be negligent, by doing acts of worship. A group of the Salaf (predecessors)

used to fill the time between Maghrib (sunset) and ‘Ishaa’ (evening) with prayer, saying that it was a time when many people were negligent. Another example is the remembrance of Allah (Thikr) in the marketplace, because this means one is remembering Him in a place where people tend to be negligent. There are a number of benefits that come from making good use of times when people are often negligent, and using these times for worship, including the following:

Doing righteous deeds at times when people are distracted and negligent is more difficult. One of the indications of how virtuous a deed is, is how difficult it is: if everyone is doing a certain action, it is easy, but if most people are negligent, this makes it more difficult for those who do remember Allah.

The scholars differed as to the reasons why the Prophet

fasted so much in Sha’ban. Their various opinions were as follows:

When Sha’ban began, if the Prophet

still had some voluntary fasts outstanding that he had not fasted, he would make them up during Sha’ban so that his voluntary fasts would be complete before Ramadan came. Similarly, if he

had missed some Sunnah prayers or he had missed Qiyam Al-Layl (the optional night prayer), he would make it up. ‘Aa’ishah

used to make the most of this opportunity to make up any obligatory Ramadan fasts that she had missed because of menstruation; during other months she was too busy with the Prophet

The month of Sha’ban - II