Muslims in the Caribbean 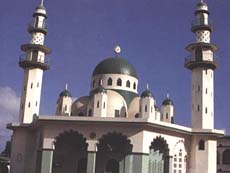 Muslims from different parts of the globe have settled in these regions. Immigrants vary from medical students to traders, from Indo-Pakistan to Indonesian and African countries. Some are very active they even reach the media in , whereas in other places, they are still in economical weakness.

Most of them have a common problem of getting permanent work permit for their imaams and Islamic workers. Some of the countries are getting a lot of pressure from the government, which is characterized as the most hostile to Islam in the whole of as in Dominico. Most of these countries have no mosques with the exception of some mosques built in few of them. They have just a prayers place or prayer house. Let us first describe in brief the socio-demographic backgrounds of the different islands of the :

There are 19 countries of the where people speak the English language. These are, Antigua and Barbuda, Bahamas, Barbados, Belize, Bermuda, Monsterrat, St. Lucia, St. Vincent, Trinidad, Tobago, Virgin Islands – US.

Among the English-speaking countries, has the largest population in the where more than 2,450,000 people live, among whom 5,000 are Muslims. They constitute 3.75 percent of the total population of the English-speaking countries of the , but this varies from 5 to 15 percent. The largest Muslims concentration of those speaking English is found in , (i.e. 100,000), where they constitute 13.33 and 8.10 percent of the total population respectively.

Muslims from and came here first as indentured servants and farm labourers respectively. They have preserved their Islamic Identify and culture but have developed not many community institutions such as schools or Awqaaf.

Christian missionary activity has, on the whole, failed to convert Muslims to Christianity. But some youths have been neutralized: low commitment to Islam while remaining nominally Muslims. Over the past 30 years, Afro-Caribbeans have been converting to Islam. Many Islamic organization have been formed since the 1970s, which are active in various endeavours.

The most well-organized Muslim community in the Caribbean region is the one in the . The Indian community is well-established and has been here for over 150 years. There are many mosques and Islamic schools. The Afro-Caribbean community of new converts is still very small and weak. The main organizations are : (Caribbean Islamic Organization of Guyana Islamic Trust respectively), the Guyana Muslim Mission , and the Guyana Islamic Institute.

Trinidad is the most important island in the , politically, economically and in terms of propagation of Islam. Local Islamic work is well developed, and local organizations are handing it well. International Islamic Federation of Student Organizations (IIFSO) whose coordination is in , the capital of Trinidad earmarked some resources for . Its work consists mainly of supporting education, managing revolving credit fund for new Muslims, and providing support to an Islamic book and video center.

In the , such as , , and Martinique, the Muslims community is mainly made up of African Muslims immigrants from , and . The total population of these five countries is 7,178,572 out of which 2,600 are Muslims. The Muslim figures for Guyana Francaise and are not known.

In , there is a wealthy immigrant Palestinian community with an Islamic center and full time Imam. Native converts are struggling to preserve their Islamic identify. IIFSO has been helping with material that propagates Islam.

In the Spanish-speaking island, such as , and , a fact finding mission was sent and contact was established with Muslim community. Total population of these countries are 20,573,000 out of which 3,500 are Muslims. The Muslims figure for is not known though the total population of the country is around 7,000,000. It is expected that the Cuban intellectuals would listen to Islam sympathetically. The Communist era has weakened the Catholic Church.
In , Pakistani Muslims have well established efforts for the propagation of Islam. There is a 2,000-strong Palestinian community in with two mosques. They are economically strong and are thus able to pay for a full time Imaam. Islamic books were sent and visited these islands. With the expected fall of Communist regime IIFSO expects to do a lot of work in propagation of Islam.

They can self-finance many of their projects. In , there is a large number of Muslims where they constitute 28.23 percent of the total population of 425,000 of the country. Three distinct Muslim communities are living in Surirnam. The Javanese from the Indonesian Archipelago have been living in the island for more than 50 years; Indo-Pakistanis came as indentured labour for more than 100 years ago. Besides, there is a growing Afro-Surinamese community here.

There is a Caribbean Islamic Secretariat which was set up in 1988 with an Executive Director and a Board of Directors to carry out the efforts of propagating Islam, Islamic literature distribution, provision of Islamic education and catering to economic development.