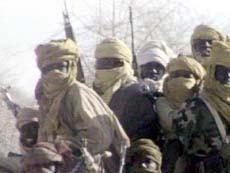 The hope, the fear, the disappointment in the United Nations in the run-up to the 61st General Assembly could be summed up in one word - .

The hope was represented by a huge rally for Darfur in 's on Sunday, as leaders and diplomats assembled for the annual UN gathering.

Tens of thousands who demonstrated against the continued killing in hope that the United Nations in the time honored phrase 'can do something'.

The fear is that the UN will be constrained by the Sudanese Government, or the Chinese, and won't be able to do much.

The disappointment is that this has happened so many times before.

, and the ongoing crisis in - or genocide as President Bush describes it - may be a barometer issue for the week that should belong to the United Nations, but may more predictably belong to the dis-united nations.

For it encapsulates the legacy of Kofi Annan, the outgoing secretary general, and throws down a challenge for those who want the United Nations reformed to make it more effective.

A key part of Annan's legacy is the now adopted 'Mission to Protect'. This followed from another African genocide, 12 years ago in .

In theory and supposedly in practice, the UN would be able to intervene despite the objections of sovereign nations, when human rights are being serially abused.

The government of is objecting to the planned deployment of a UN force of some 18,000 so the big test will be to see whether the UN can agree to ignore 's objections.

The wild card in the pack remains , who for her own economic reasons is reluctant to upset the government in and remains the other stumbling block to ending a conflict that has so far claimed thousands lives.

Annan, anxious for a solution to and many other crises worldwide, said last week that the "United Nations is a sum of it's parts".

As ever this basic truth lies behind other deep-seated problems at the decrepit headquarters where the UN is based.

The UN cannot agree about structural or financial reform either. In recent months some of the biggest founders of the organization - the United States and the United Kingdom - have taken to reminding smaller countries that as they pay the big bills, so too they should be entitled to more influence.

Many of the smaller countries respond that, while that may be the case, it is they who provide the manpower for many of the UN peacekeeping missions in dangerous parts of the world.

They are in turn supported by countries such as India, Brazil and South Africa who wouldn't object to the UN Security Council being more hands on and responsive, and would like to be members themselves.

The West demands better housekeeping and outsourcing of UN functions. The South sees this as yet another example of the big powers accruing yet more power, and handing over UN functions to big business.

Aside from the procedural wrangling that stops the UN from being more effective, the world's attention will shift dramatically to the arrival of two presidents at the UN General Assembly on Tuesday - namely Bush and Ahmadinejad.

Bush this week expressed his frustration with the UN over Darfur, but many at the General Assembly will doubtless express their frustrations that he largely ignored the organization in the run up to what Kofi Annan subsequently declared to be an 'illegal' invasion of Iraq.

Ahmadinejad will face the ire of a number of nations furious that Iran continues to ignore Security Council resolutions on it's nuclear programme, and will be looking for ways no doubt of upstaging the US president.

Older UN hands recall the occasion when President Khruschev strode to the rostrum and, attacking policy, began banging his shoe on the podium.

Whether the theatrics will match those of Khruschev is anyone's guess.

So will the great talking shop that is the United Nations General Assembly actually achieve anything?

Maybe behind the scenes, leaders and countries will come together in an informal dialogue, the sort of dialogue that improves relations and lessens conflict.

Maybe agreement will come about more easily over such vexed issues such as and United Nations reform in an intensive week of lobbying, briefing, press interviews and behind the scenes negotiations.

And the election of a new secretary general to replace Kofi Annan, will set the scene for the UN's priorites over the next period.

The current favourite is Ban Ki Moon, the current South Korean foreign minister, a less political and controversial figure than Annan has become, and, for some at least, a sign that there are enough countries who take UN rerform seriously enough to put a proven technocrat in charge.