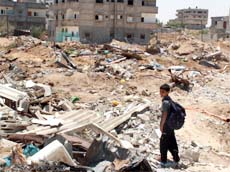 As the Israeli disengagement from the Gaza Strip draws to a close, hopes for economic prospects in this impoverished, strife-torn land have been renewed.

Already, the EU has pledged investments in , with 700-800 million euros of mainly infrastructure projects by June, according to Antoine Eric de Haulleville, head of the EU's International Management Group mission in .

The government transfered 50 million US dollar to the Palestinian Authority in a ceremony in Ramallah on 24 August. The money will go mainly to housing restoration, roads, water facilities, schools and health clinics.

But 's prospects of economic success are clouded if it remains cut off from the and from the rest of the world after the Israeli withdrawal, experts have said.

According to the World Bank, a lot more than dollars and disengagement is needed if the Palestinian economy, now a shambles, is to revive.

"Disengagement in and of itself will not make an appreciable difference to the prostrate Palestinian economy," said World Bank country director Nigel Roberts.

A December report issued by the bank warned that if the Israeli closure regime that has crippled the Palestinian economy was not changed, poverty and alienation would deepen.

For the economy to benefit from disengagement, these border closures will have to be dismantled quickly, Roberts said.

"Restrictions on the movement of Palestinian goods and people imposed during the intifada … have so severely distorted and compressed the functioning of the economy that returns on investment are now for the most part negligible."

The high cost of crossing the borders has made it more expensive to ship goods between Palestinian cities than from to , says a Palestinian executive.

"If you get a product out from Nablus to Ram Allah, because it has to go through the back-to-back system of service delivery, it's much cheaper to ship something from Ashdod (Israel) to China," said Sani Daher, CEO of Paltrade, the private-sector, government-mandated national trade promotion association of Palestine.

Daher continued: "So you can see the effect this has on our economy. Under the 'back-to-back' system, goods must be unloaded from one truck, extensively checked and reloaded to another truck.

"The process, which can take two days to two weeks, increases the costs of trade in so much that businesses are no longer competitive."

Paltrade faces the formidable task of developing Palestinian trade as a driving force for a sustainable economy, while every aspect of that economy is under the control of an outside power.

The trade organisation works with key Palestinian businesses, helping them develop a strategy to become more competitive and meet market access requirements. But Daher fears the organisation’s work will be rendered meaningless by Israeli restrictions.

"I think our efforts without freedom of movement of goods and people to a certain extent will be moot because if there are physical impediments to the movement of goods, there is nothing we can do in terms of trade development and trade promotion," Daher told Aljazeera.net from the trade group's Gaza offices.

So far, talks on changing the Israeli-controlled border regime have been inconclusive, according to the Palestinian Minister of Economy Mazen Sinnokrot, who met a Jordanian trade delegation on Sunday to discuss on trade relations.

"Up till now, discussions are going on in earnest, experts from the international community are present, representatives from the [] Quartet and the World Bank are also attending.

But so far we have not reached breakthroughs that we can report on the free movement of goods into Gaza," Sinnokrot said, adding that Israeli officials had turned down proposals by third-party security experts to update security screening techniques.

A slew of laws and regulations have been enacted in recent weeks to create incentives for investors - both Arab and Palestinian - to come to Gaza Strip.

But Daher says pumping in foreign aid, on which ’s economy has stayed afloat for the last few years, or encouraging investment is not enough for economic renewal.

Uncertainty about the future is hindering growth.

"There are 4 billion US dollar of deposits in Palestinian banks from the Palestinians themselves in . There is no shortage of money in ," Daher said.

"We don't need foreign direct investment. People aren't investing because they don’t see what would happen to their investments."

Others point to government mismanagement and say a clear economic strategy is lacking.

"We are facing a host of problems that render the prospects for a successful economy minimal," said Mahmud al-Farra, a Palestinian-American private investor who co-built the Palestinian Flour Mills and the Palestinian airport in the 1990s and lost much of his profit to a Palestinian Authority takeover of the mills in the late 1990s.

"First, there is no government planning. Second, people are simply not up to it - there is no appetite for investments. And, finally, the purchasing power is non-existent."

"We also have to ask ourselves - who is out of his mind enough to come invest in ? I don't think we'll see change in the coming two years, and even then not much will change on the ground politically speaking."

Echoing the December World Bank report, Daher said that a Palestinian recovery can only come through a change in the border regime followed by export development and a government strategy for economic development.

"If there’s a concerted effort to develop exports with a reformed border regime for facilitating the movement of goods, you could see a significant drop in unemployment as much as 11% by year 2006," he said.

Trade development and export development, in turn, will drive all other aspects of the economy, including investment.

"It's all linked to facilitating the movement of goods and people," Daher said.

Ultimately, the real test is in the West Bank, says Daher, whose fate he fears will mirror that of ’s in recent years.

"There's a reason why the unemployment in is double that in the . It's not because people are lazy. It is because has been surrounded by a wall for seven or eight years and products cannot get out easily. The problems of al-Mintar [commercial crossing] have choked the economy to unbelievable levels."

After built an electric fence around the impoverished strip in the mid-1990s, unemployment and poverty soared and the economy has been crippled. Only 40 truck shipments of a possible 150 are allowed outside of "on a good day", Daher says.

The same back-to-back commercial crossing system used on 's borders is to be put in place in seven locations across the separation wall in the in coming months, according to Daher.

"It is like a bottleneck for the whole Palestinian economy in . And that's what's coming to the West Bank when the Israelis in a few more months will close down the wall, and people don't realise that," Daher said.

"We expect that in a couple years you will see a similar surge in unemployment in the . This is a serious threat not only to the economy but I believe to peace in the region."