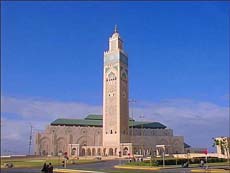 Morocco wants to lure back its citizens living abroad to reverse a brain drain and reduce poverty, but many say they have worked hard to carve out a life in Europe and to return would be a leap into the unknown.

The three million Moroccans living abroad represent around 10 per cent of the country's resident population and their money transfers are its biggest foreign currency source after tourism.

An official report early this year said must create 400,000 jobs annually over the next 10 years to prevent mass unemployment, especially among graduates.

The government is turning to expatriates to help build the businesses that will create those jobs.

But many of those who fled unemployment in now have good jobs, higher living standards and foreign-educated children.

Even those struggling in the European job market who feel discriminated against because of their origins say a return to holds risks and uncertain rewards.

"It's already hard enough getting by in ," said Jaouad Ouargo, a 21-year-old auto engineer from , as he queued in the northern of for the ferry to . "If I try something new here, it'll be harder."

High-value industrial exports are being nurtured with free trade deals and heavy transport infrastructure investment to reduce the economy's reliance on drought-prone agricultural.

While foreign investment in is booming, spurred on by large-scale tourism and property developments, expatriates appear loath to sink their money into smaller, job-creating enterprises.

Some 2.58 billion US dollar were repatriated in the first half of 2006, 24 per cent more than a year earlier, but most went to support families and build second homes.

Many Moroccans living abroad say they are put off starting a business by complex administrative procedures, the risk of long delays in getting the right documents, and a perception that you need powerful contacts in business and government.

"This reticence is linked to a totally outdated image," said Jelloul Samsseme, head of 's northern regional investment centre, saying anyone wanting to start up a business could have all the documents they need from one location within 48 hours.

At annual meet-and-greet events to coincide with the summer exodus to the motherland, officials try to convince Moroccans based abroad that setting up shop at home has never been easier.

Nezha Chekrouni, the minister for Moroccans living abroad, said: "Yes, there are still many problems but we are doing our best to solve them.

"We hope to establish new instruments ... including an investment fund."

Kamal Lahsen, 35, grows lettuce in and says he is ready to come home. It would be tough for his children who speak only Spanish, but he wants to be near his family.

"It's got easier to create a company and I think I could get financial help," he said. "Next year I'll try to get some money together and then - who knows?"

Builder Jawad, 35, remains to be convinced.

"My father had a business here building shop interiors but he went bankrupt and the reason was corruption," he said.

"In you have to pay lots of money to win new business and he was behind paying his workers and lacked the cash."