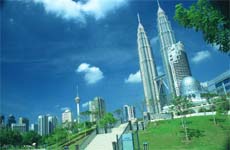 The heritage of Islam in science and arts is clear evidence that Islamic concepts are compatible with the present and future aspirations of the Muslims. The success of in building a vibrant economy and a cohesive national identity from a patchwork of cultures has shown that Islam guides its believers toward knowledge, progress, tolerance and good governance. has proved that Islam is as reGreater today as it was 14 centuries ago. Because of the Malaysian example, the Muslims around the world now have high hopes for the rebirth of Islamic civilization soon

Since C.E. 878 (14th century AD) Islam was embraced by the people along the coast of , which was a well-known trading centre. Before the advent of Islam various ethnic communities for so long had been looked upon as low caste. They embraced Islam peacefully because they saw that in Islam there is no discrimination on the basis of class or tribal affiliation and race. After graduating from religious schools called pondoks or madrassahs, the Malay pupils would go back to their homeland, often in some remote corner of the country to spread the pure teachings of Islam.

In the 19th century, the Western colonial powers invaded the Peninsular Malaysia and brought in many missionaries along with Indian and Chinese labourers to put pressure on the Malay Muslims. The colonial powers unsuccessfully attempted the Christianisation of the locals by various means, in particular through their educational systems.

A Tiger Is Born

In 1957 the federation of Malaya becomes independent from and was formed in 1963 through a federation of many former British colonies. Two decades after independence, was still a middle-income country, with an economy dependent on commodities. It was exporting only raw materials such as rubber, palm oil and tin. The of 1981 was in many ways still the city that the British had left at independence 24 years earlier. There was no skyscraper of note to be seen.

Today, 's skyline is dominated by landmarks such as the , still officially the world's tallest buildings. More tall buildings shot up seemingly overnight in Malaysian cities as the Malaysian companies asserted themselves through architecture.

From 1971 through the late 1990s, has become an emerging multi-sector economy. The growth was almost exclusively driven by exports - particularly of electronics, steel and cars. today is one of the biggest manufacturer and exporter of hard drives and memory chips in the world.

In Malaysian cities you will see manifestations of progress, tolerance and pluralism: a modern economy, an educated and urbane work force, and the ethnically and religiously diverse populations peacefully coexisting.

Mahathir Mohamad, a doctor began his political career in 1946, when he joined a newly founded nationalist party called United Malays National Organisation (UMNO). In 1964 he became an UMNO member of parliament. He took over the leadership of the United Malays National Organisation (UMNO) and elected to parliament in 1974. He was later appointed Minister of Education and in 1981 he became prime minister.

When he took over, Dr Mahathir has gathered around him a coterie of powerful aides and businessmen. He simply picks the best person to do a job. Open and diverse economy rapidly transformed to one of 's richest countries, with a strong electronics export sector. They have invested heavily in education, poverty eradication and rural development, uplifting the living standards and dignity of all Malaysians.

Dr Mahathir's policies at home won him much popular support and helped him build a national identity in this multiracial nation. Malaysians adopted a mixture of capitalism, Islam and nationalism. He rebuilt the relations between 's ethnic groups by blending about 23 millions comprising Malays, Chinese, Indian and tribal minorities. Therefore, Mahathir has often been described as a father figure for the country and he was revered and respected accordingly.
Dr Mahathir is hailed by many as a folk hero as he gave his native Malays a major dose of modernization to help them get out of their dilemma with guaranteed share of educational and other opportunities, and a stake in every company. The share of national wealth held by Malays has risen from 9% to more than 20%. Poverty levels have fallen to 5% of all households, from more than 35% in 1982. Two thirds of the population now lives in cities.

Dr Mahathir is a confrontational spokesman for the Muslim world. He accused Western neo-colonialists bent on subjugating and threatening its success. Defending Islamic values, he criticised what he called Western double standards. In July, hosted a global conference of Islamic scholars with the aim of countering misconceptions about Islam. He strongly condemned what he called the endless wars of and argued that the response to the 11 September attacks marked a return to old ways of attacking Muslim countries and Muslims, whether or not they are guilty.

He has also condemned the US-led war on and and called on Muslim countries to embrace modernity. Dr Mahathir described Westerners - or more particularly "Anglo-Saxon Europeans" -- as proponents of "war, and genocide.

When assumed the chairmanship of the Organization of the Islamic Conference, in his opening speech he warned of a worldwide Jewish conspiracy.

In 1997 the Asian financial crisis obstructed a decade of impressive economic growth of the Asian tigers. was hard hit by the global economic downturn and the slump in the information technology (IT) sector in 2001. However, emerged relatively unscathed from the Asian financial crisis after Dr Mahathir defied the International Monetary Fund, introducing controversial currency controls which effectively isolated his country from the global economy.

A substantial fiscal stimulus package mitigated the worst of the recession and the economy rebounded in 2002. Healthy foreign exchange reserves and relatively small external debt make it unlikely that will experience a crisis similar to the one in 1997, but the economy remains vulnerable to a more protracted slowdown in and the , top export destinations and key sources of foreign investment. Foreign currency traders, such as the financier George Soros are accused of creating the Asian financial crisis that hit the Asian tigers.

The Other Half of the Moon

Anwar Ibrahim, the leader of an Islamic youth movement affiliated with Pan-Malaysian Islamic Party (PAS), was co-opted by the ruling party UMNO in the late 1980s, and before long had risen to become Deputy Premier and presumed successor of Mahathir. But Mahathir turned savagely on his deputy in 1998.

Against the background of differences over economic policy between Mahathir and Anwar Ibrahim, Mr. Ibrahim was abruptly sacked and accused of corruption and sexual misconduct. Following a controversial trial, Mr. Ibrahim was found guilty and sentenced to more than nine years in prison. He is still serving the jail sentences.

The Malays are accusing Dr Mahathir of abandoning his Muslim principles. Critics of Dr Mahathir say that after 46 years of independence, there is not much sign of that the teachings of Islam are being applied in . They claim that Dr Mahathir began what was known as the Islamisation process, in an effort to ward off the challenge of PAS. PAS leaders say that when they tried to bring Islamic law into the state, they won at the last election; the resistance from Dr Mahathir was much greater than that from non-Muslims.

More recently, Dr Mahathir was accused of using the US-led war on terrorism as an excuse to neutralize Islamic political opponents at home. Scores of suspected militants have been arrested without trial under the much-criticized Internal Security Act. Many accuse him of "crony capitalism" and cowing of the press and the courts.

Last week 's main opposition party, the Pan-Malaysian Islamic Party (PAS), has unveiled its plans for an Islamic state, ahead of elections expected within a year. PAS leaders said their party would create an Islamic state and that Sharia law is only going to be implemented to Muslims; non-Muslims will not be forced to be under this law.

PAS leader Abdul Hadi Awang said PAS would amend the federal constitution to create an Islamic state, if it wins power in the next election, which Prime Minister Abdullah Badawi is expected to call in early 2004. Sheikh Awang said that his party offered the alternative to Western-style democracy, which had led only to "endemic social decadences and rampant injustices".

Last month Abdullah Ahmad Badawi took over as prime minister as Mahathir Mohamad stepped down after 22 years in office. The leadership transition was smooth. Mr Badawi is one of the most popular of UMNO's leaders, seen as clean-cut, religious and experienced. Badawi is a devout Muslim from a family of distinguished religious teachers. Even the Islamist opposition accords him a degree of respect for his religious learning. It is hoped that he may offer more democratic space.

Other Muslim countries should follow the Malaysian example by eschewing the literalist understanding of Islam for a progressive orientation that gives primacy to the broader objectives of Shari'a law and meets the demands of modernity. Muslim countries should focus on the provision of human-resource development. The religious schools should also teach secular subjects beside Fiqh and Arabic language.