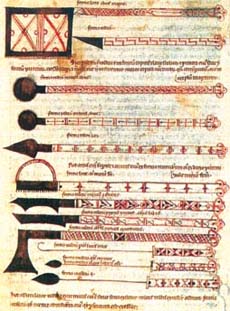 He was a unique encyclopedic scientist. He is considered as one of the greatest physicians in Islamic culture, and one of the earliest Arab physicians. He was also one of the founders of modern chemistry. He was well-versed in all branches of knowledge and he made significant scientific contributions to medicine, chemistry, mathematics, literature, and so on. For several centuries, his books, especially those written in the field of medicine, were the main references for instructors and students alike. He was the scientist and physician Abu Bakr Muhammad Ibn Zakariyyah Ar-Raazi.

His Birth and Early Life

Abu Bakr Ar-Raazi was born around 250 A.H. (864 A.C). in Rey, modern day Iran. He started to seek knowledge in his early years. He studied mathematics, astronomy, chemistry, and logic. Since he was young, he was known for his intelligence, genius, and excellence as far as his academic abilities are concerned. He had the ability to memorize whatever he heard or read in an amazingly fast speed.

When he was thirty years old, he left for Baghdad which was the center of culture and science at that time. There, he studied chemistry and philosophy but he paid special attention to medicine. His teacher in medicine was the physician Abul Hasan `Ali Ibn Sahl At-Tabari. Ar-Raazi stayed in Baghdad for a while where he studied in the best academies of that time until he returned to his hometown where he was appointed as the head of Rey Hospital. After occupying this important position for a short time, Ar-Raazi became famous everywhere.

Some years later, Ar-Raazi became the grand physician of his time. He also mastered chemistry and was especially well-versed in its application until he became the most famous Muslim pharmacist.

His Unique Achievements and Inventions

Abu Bakr Ar-Raazi was one of the first pioneers who made great contributions to humanity, especially in fields such as medicine, chemistry, pharmacology, and physics. The great influences of these contributions remained until the present day.

His Achievements in Medicine and Pharmacology:

Ar-Raazi was of the opinion that medicine should be first utilized to protect people against illnesses before using it as a means of treatment and cure.

- He was also one of the first physicians who paid attention to the impact of psychological effects in treating patients. He used to advise his students to give their patients the impression that they are not very sick and that they would recover soon. He said: "A physician must always convince the patient that he will recover, and make him hope to be cured even if he is not sure about it. The performance of the body is greatly affected by its psychological mood."
- Ar-Raazi adopted several means in clinical medicine which involved monitoring the patient in bed and recording any symptoms or changes in order to provide proper diagnosis. Among such means were checking the symptoms on the skin and the eyes, and testing the breath, temperature, pulse, and urine.
- Ar-Raazi also developed an innovative method for choosing the best locations for building a hospital, which remained greatly admired by physicians until today. This method is to place some pieces of meat in different places (in the city) and watch how rotten they became with the passing of time. Of course, the best places in terms of good and healthy environment would be the least effective in making the meat rotten.

His Achievements in Chemistry:

- Scientists consider Abu Bakr Ar-Raazi as the father of modern chemistry. His great contribution to this science became evident when he divided the known materials into four categories: metal, plant, animals, and derivative materials. He also divided metals into six categories according to their characteristics and attributes.

- Abu Bakr Ar-Raazi was the first scientist to refer to sulfuric acid and he called it vitriol oil or green vitriol. He also prepared some other acids in his laboratory and the methods he followed in preparing them are still being used today.

- He was the first scientist to extract alcohol by distilling fermented starchy and saccharine materials.

- He was the first scientist to differentiate between soda and potassium. He also prepared some poisonous liquids from vinegar.
- He was one of the first scientists to apply chemical knowledge in medicine and to recognize the effect of drugs on activating chemical reactions in the patient's body.

His Achievements in Physics:

Ar-Raazi was interested in determining the qualitative intensity of liquids, and he developed a special scale for measuring it, which he named: "The Physical Scale". Through this scale, Ar-Raazi is credited for measuring the qualitative intensity of several liquids. Besides, he was one of the first scholars who criticized Euclid's theory of vision which claimed that vision occurs due to a ray that is emitted from the eye to the visible mass. Ar-Raazi was of the opinion that vision occurs because a light beam emits from the visible mass to the eye.

Abu Bakr Ar-Raazi spent most of his life reading, writing, and experimenting. It was even said that he lost his eyesight at the end of his life because of excessive reading, writing, and experimentations. Ar-Raazi wrote a large number of books in all fields of knowledge. Some researchers listed about 148 books and treatises authored by him. Some others mentioned that he wrote about 220 books. Some of his books, especially those concerning medicine, were largely widespread and many of them were translated into several languages. European universities relied on many of them in teaching, and some of his books were even the top references in medicine until the seventeenth century.

Among his most famous books are:

It is the greatest and most voluminous book written by Ar-Raazi. He spent 15 years writing it. In this voluminous book, Ar-Raazi's skills in medicine, his precise observations, deep knowledge, and capabilities of deduction are abundantly clear.

- Other books include "Smallpox and Measles", "Al-Mansoori in Medicine", "The Excellent in Medicine", "He Who is not Attended by a Physician", "Stones in Kidneys and the Bladder", "Benefits of Foods", "The Secret of Secrets", "The Pre-requisites of Vision", "Why Magnets Attract" ... etc.

Abu Bakr Ar-Raazi was a kind-hearted and generous man. He was kind and dutiful to his family, friends, and acquaintances. He was affectionate to the poor and needy as he used to provide them with free medical care and even give them some of his own money as charity as he was a very rich man. He used to exert his best efforts in treating them. Ar-Raazi used to observe Islamic teachings and respect the sacredness of the human body in his researches and experiments. That's why he used to perform anatomy and experiment new medicines on animals first before prescribing them to people. However, he was kind-hearted towards animals as well as he prescribed many medicines that cure several animal diseases.