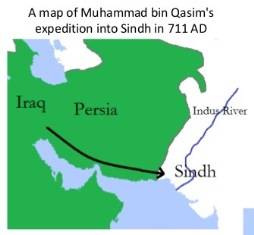 Al-Hajjaj Ibn Yoosuf At-Thaqafee, the ruler of was sitting in his court surrounded by his dignitaries and army commanders (chief of staffs). They were discussing the affairs of the state trying to find solutions to people's problems. One of Al-Hajjaj's men entered and whispered some words to him, so he stopped the conversation and said loudly: "Let him enter immediately!"

The man entered with a message and said to Al-Hajjaj: "This is an urgent message that has just been brought by the messenger from 'Sindh' territories". Al-Hajjaj took the message and began to read it. Before he had finished, he stood up abruptly in a rage. The attendants got worried, and one of them said:

"May Allah rectify your affairs? What was said in this message to upset you? Has anything wrong happened to the Caliph 'Al-Waleed Ibn `Abdul-Malik'? Has any of our enemies attacked any part of our land?"

Al-Hajjaj did not speak for a while then he erupted in a rage and started to tell them the content of the message. He said, "The king of the sent us some ships full of gifts. On board, there were some Muslim women. On their way, some pirates from the city of 'Daibul' (a port at the mouth of the River Sindh in ) attacked it. They stole the gifts and took the women as captives.

When Al-Hajjaj became calm, he wrote a message to 'Dahir' the king of Sindh demanding him to release the Muslim women, but the king was unable to do so. He sent a message to Al-Hajjaj telling him that the captives had been caught by notorious thieves and that he could not rescue them. Al-Hajjaj was not convinced with the answer of the king of Sindh, so he intended to punish those pirates and restore dignity to the Muslims. He sent a military expedition to fight the pirates, but they were completely defeated on the . So, he sent another expedition, but it also failed to fulfill its mission.

After the defeat of his expeditions, Al-Hajjaj realized that he must plan and prepare himself so his enemies would not underestimate the Muslim state. He intended to send a huge army to conquer the territories of Sindh, propagate Islam there, and help its people get rid of the injustice of their governors. At the same time, he wanted to secure the borders of the Islamic state and trade routes. He sent for the Umayyad Caliph in Damascus Al-Waleed Ibn `Abdul-Malik' asking for his permission to prepare and equip the army. It took Al-Hajjaj some months to prepare the army and recruit thousands of experienced and brave soldiers. He equipped them with the most powerful weapons, supplies, and food sufficient for their expedition.

After preparing the army, he began to review the names of the army leaders he had in order to choose one who could fulfill this mission. Then he decided to choose his cousin Muhammad Ibn Al-Qaasim whose reputation had begun to increase even though he was still less than twenty years old. He was an emerging star who was known for his power, bravery, and skill in strategies of war and undertaking military campaigns.  He had the ability to lead soldiers to victory. He was patient in fighting and firm in the battlefield. The news that Muhammad Ibn Al-Qasim had been chosen to lead the army, spread, so the soldiers were optimistic and were confident that Allah would grant them victory. The young leader began to survey the army preparations, set the military plans, explored his enemy's position, and came to know the points of their power and weakness. When he was sure that everything was all ready, he ordered his soldiers to depart.

The army set out towards its target, fully equipped and thoroughly prepared. The soldiers were shouting "Allahu Akbar" (Allah is the Greatest). When the army reached 'Makran', they rested there for some days. The young leader started to split his army into two divisions. One division went through the land route and the other through the sea.

Then Muhammad Ibn Al-Qasim went to the city of ‘Daibul’ and started to besiege it. All of this happened on Rabee' Al-Awwal, 89 A.H. At the same time, the Islamic warships carrying the soldiers, supplies, and weapons arrived. They completely besieged the city. The leader ordered the soldiers to strike the city with catapults and to target the huge idol that was being worshiped by the people of the city. This idol was named ‘Budh’. The idol was destroyed under the heavy stone shots of the catapult.

The courageous soldiers climbed the walls of the city using ropy ladders. After three days of the siege, the Muslims were able to flood into the city after the soldiers of ‘Dahir - the king of Sindh - escaped.

After Muhammad Ibn Al-Qasim was sure the city of ‘Daibul’ was stable, he left some Islamic guard forces there. Then he led his army to conquer more cities. He won all the battles because he only fought to free all people from slavery and tyranny, and to implement justice and spread peace and security.

The policy of Muhammad Ibn Al-Qasim towards the people of Sindh encouraged many people to join him. He conquered all the territories of Sindh one after the other yet, he was not content until all Sindh become under the Islamic state. He fought with Dahir who wanted to ambush Muhammad Ibn Al-Qasim by dragging him inside the city and then kill him.

Muhammad Ibn Al-Qasim realized the king's plan, so he prepared his own plan that would surprise the king. He crossed the river of 'Mahran'   at night with thousands of his soldiers. After few hours, the whole army was on the other side facing the army of ‘Dahir’.

In the morning, the battle flared and Dahir was leading the battle on the back of an elephant surrounded by other elephants. The battle lasted for few hours, and the Muslims were victorious. Dahir was killed, and his soldiers were scattered and ran away from the battlefield.

After this great victory, Muhammad Ibn Al-Qasim continued conquering the remaining territories of Sindh.  He started to establish the foundations of the Islamic rule. He spread justice, so people welcomed him and gave their allegiance to the Muslims who protected their souls and money. A lot of them became Muslims and their response to Islam was great despite their different social backgrounds. In addition to the public, governors, leaders, ministers, and princes of different areas became Muslims like prince Kakah Ibn Jandar the cousin of Dahir the king of Sindh.