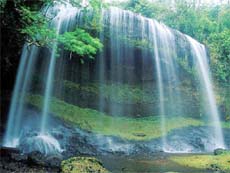 was one of the throng of thousands who had gone to At-Tan'eem, on the outskirts of Makkah, in answer to the call of the chieftains of the tribe of Quraysh, to witness the death of Khubayb Ibn 'Adiyy

one of  the companions of Muhammad

. They had just captured him by means of treachery.

The youthful energy and exuberant strength of Sa'eed

had enabled him to elbow his way through the crowd. He stood side by side with chiefs of Quraysh as Abu Sufyan Ibn Harb, Safwan Ibn Umayyah, and others who led the procession.

Thus, he was able to see the captive taken by the Quraysh bound in fetters, pushed forward by the youths, women, and children to the place of death. They were to avenge themselves upon Muhammad

through him, and by his death take revenge for those of them who had fallen at the battle of Badr.

When the swelling crowd arrived with its prisoner to the place prepared for his execution, the tall, youthful Sa'eed

stood looking down at Khubayb

as he was being set forward to be killed. Through the shouts of the women and children, he heard his calm, steady voice saying: "If you would allow me to make two Rak'ahs (units) of prayer before my death, then do so."

as he took his stance in the direction of the Ka'bah, and as he prayed two beautiful, dignified Rak'ahs. Then Sa'eed

saw him turn towards the leader of the people saying: "I swear by Allah if you did not think I was taking too long for prayer out of fear of death I would pray much more." Then Sa'eed

witnessed his own people as they mutilated Khubayb

hacking him into pieces as they said: "Would you like Muhammad to be in your place, and for you to be safe in his place?" He heard his answer as the life bled out of him: "By Allah I would not wish to be safe and secure with my wife and children, if Muhammad were to be pricked by a thorn because of it."

The shouts of the people became howls, their arms waving in frenzy as they shrieked: "Kill him! Kill him!"

raise his vision from where he was crucified, to the heavens and he heard him say: "Our God! Count their numbers and exterminate them. Leave not one of them," as he breathed his last, leaving his body riddled with countless gashes and stabs.

Then Quraysh returned to Makkah and, in the great rush of events, which followed, forgot about Khubayb

and his death. However, Sa'eed

who was rapidly maturing, was unable to forget Khubayb

for a moment. When he slept, he would see him in his dreams and would envision how he had prayed with such tranquility right before the spot on which he was to be killed. His curse against Quraysh rang in his ears, and he feared at any moment to be struck down by lightning of a meteor.

had inspired, must be a prophet sent from heaven.

Thus,F Sa'eed's heart opened to Islam so that one day he stood up in a public gathering renouncing the tribe of Quraysh and their evil deeds, and renounced their idols and totems. Thus, he professed Islam.

migrated to Madeenah, where he became a constant companion of the Prophet

and joined him in the battle of Khayber, and in subsequent military endeavors.

left this worldly life to be with his Creator, Sa'eed

remained loyal to each of the blessed Prophet's successors, the Caliph Abu Bakr and the Caliph 'Umar

. He was a living example of a believer who had bought the life of the hereafter by giving up this world. He preferred pleasing Allah and wanted His reward more than any wish of the mind or the body.

The two successors of the Blessed Prophet

were aware of Sa'eed Ibn 'Aamir's honesty and awareness of Allah. They would listen to his advice and take heed of what he would say.

when he first became Caliph and said: "'Umar I enjoin you to fear Allah in your dealings with people and not to fear the people in matters of religion. Let your action not contradict your speech for the best of speech is that which verified by action. 'Umar, you must constantly supervise those over whose affairs Allah has given you authority: Muslims near and far. Love for them what you love for yourself and your family, and hate for them what you would hate for yourself and your family. Charge into a battle for the sake of right and fear the blame of none in a matter of religion.'

answered: "A man like you, whom Allah has given authority over all the Ummah (nation) of Muhammad

with none above you except Allah."

At this point 'Umar

asked Sa'eed for his support saying, "Sa'eed I have chosen you as the governor of Hims." He answered, "I beg you not to tempt me with worldly vanity," and 'Umar

was angered. He said, "Woe to you. You have laid this burden upon me, and then all of you, turned away from me. I swear by Allah I will not release you from the appointment. What should I assign for you as a salary?"

. He told them, "Write the names of the needy citizens so that we can give them assistance." They gave him a list, and on it was the name of Sa'eed Ibn 'Aamir

. Surprised, Umar, may Allah be pleased him, asked them which Sa'eed this was, and they said: "Our governor." "Is your governor poor?" 'Umar

asked. "Yes indeed," they answered. "Many days go by between one time when he cooks in his home and the next."

wept until his tears were splashing down on his beard. Then he collected one thousand Dinars and put them in a bag and sent them to Sa'eed

When the delegation brought the bag to Sa'eed

he looked in it and when he found it to be money, he pushed it away saying: "Surely we belong to Allah and to him shall we return," as if a misfortune or some terrible disaster had befallen him. His wife overhearing came running in alarm, saying: "What has happened, Sa'eed? Has the commander of the faithful died?" "Worse than that," he answered. "Have the Muslims been harmed in a battle?," she asked.

"Greater than that," he answered. "What could be greater?" she asked, "The vanity of this world has come to me," he said, "to ruin my chance of a share in the Hereafter, and temptation has entered my home."

"Rid yourself of it," she said, not understanding that he had received money, and so he asked, "And will you help me to do so?" "Of course," she answered.

Therefore, he took the money, divided it into many small bags, and distributed it among the needy Muslims.

went to to inspect for himself the living conditions of the people. He went to Hims, which was nicknamed "Little Kufah," because its inhabitants, like those of  the original Kufah, were always complaining about their officials and their governors. When he arrived, the citizens came out to pay their respects to him, at which time he asked them whether they like their new governor.

They complained bitterly about a number of things that Sa'eed did, four things in particular. 'Uamar

himself narrated: "So I had them confront him, and prayed to Allah that I would not be disappointed in him, for I had great trust in him. I asked them, 'what complaint do you have about your governor?' they answered, 'He does not come and attend to our affairs until late in the morning.' "I asked: 'What have you to say about that, Sa'eed?' he was silent for a moment before answering: 'I never wanted to speak about this, but here it seems that I must. My wife does not have a servant to help her with the family, so I get up early every morning, knead the dough for them, wait a while for it to rise, and bake the bread for them. Then I make my ablutions and go out to the people.'

"So, I asked them what other complaints they had about him, and they said he was never available to be seen at night. I said: 'What have you to say about that, Sa'eed?' he answered: 'I did not wish to make this public either, but I have made daytime for their affairs and the night to spend in worship of Allah".

"I asked what other complaints they had, and they said: 'One day every month, he does not come out to us at all.' I asked Sa'eed the reason for this and he said: 'Commander of the Faithful, I have no servant, and no clothing save that which I am wearing. I wash it by hand once a month, and it takes it a whole day to dry so that I can put it on and go out again.'  When I asked what else they complained of, they said that from time to time he appeared to faint and lose consciousness of his surroundings. When I asked Sa'eed the reason for this he said: 'I witnessed the execution of Khubayb Ibn 'Adiyy

when I was still a pagan, and saw how the people of Quraysh cut him to pieces, asking if he wished that Muhammad

was in his place. I heard him say he would never wish for himself to be safe and secure with his family, and Muhammad

even be pricked by a thorn because of it. Every time I remember that day, and how I did not come forth to aid him, I fear that Allah will never forgive me, and I do faint.'

At this point, Umar

"Shall I get you something better than that?" he asked. "What could that be?" she asked.

He answered: "We will give it to the one who can return it for us, when we need it most."

Confused she said: "I still do not understand." He said, "We shall lend it, as a beautiful loan, to Allah." She said, "Now I understand, and He shall repay it many times over."

On the spot, he divided the money into portions, and sent someone in his household to distribute it among widows, orphans, and the poor.

May Allah be pleased with Sa'eed Ibn 'Aamir Al-Jumahi for he was generous to others even when he was in extreme need.