A Muslim perspective on Christmas -I 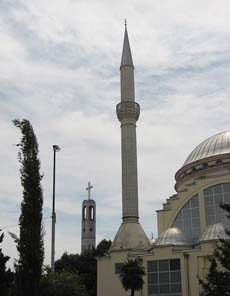 To a Muslim living in the West, the Christmas Holiday period is one of the most stressful times because of the differences in our attitudes towards holidays and celebrations of the status quo. Even in Islamic countries, there can be misunderstandings on these issues with our Christian colleagues. The following essay is my personal attempt at bridging this gap to promote an understanding of the Islamic perspective regarding this topic.

The word Christmas comes from the Old English term Cristes maesse, meaning "Christ's mass." This was the name for the festival service of worship held on December 25th to commemorate the birth of Jesus, may Allah exalt his mention. There is neither certain information on the date of his birth, nor even on the year. One reason for this uncertainty is that the stories of his birth, recorded in the New Testament books of Matthew and Luke, were written several decades after the event. Those who wrote it gave no specific dates for the events they mentioned.

For several centuries the Christian Church itself paid little attention to the celebration of Jesus' birth. It ranked after Easter, Pentecost, and Epiphany in liturgical importance. The major Christian festival was Easter; the day of Jesus' purported resurrection. Only gradually, as the church developed a calendar to commemorate the major events of the life of Jesus, may Allah exalt his mention, did the celebration of his birth become significant.

Because there was no knowledge about the date of his birth, a day had to be selected. The Eastern Orthodox and the within the Roman Catholic Church chose January 6th. The day was named Epiphany, meaning "appearance" (i.e. the day of Jesus' manifestation). The , based in , chose December 25th. It is known from a notice in an ancient Roman almanac that Christmas was celebrated on December 25th in as early as 336 AD.

In the latter half of the 4th century, the Eastern and adopted each other's festival, thus establishing the modern Christian 12-day celebration from Christmas to Epiphany. In some places the 12th day is called the Festival of the Three Kings because it is believed that the three wise men, or magi, visited the baby Jesus on that day, bringing him gifts.

Today Christmas is more than a one-day celebration or a 12-day festival. It is part of a lengthy holiday season embracing at least the whole month of December. In the , the holiday season begins on Thanksgiving Day and ends on January 1st, New Year's Day, a period of about five weeks. Actually, it is also an essential part of the business cycle - definitely the month comprising an important retail period of the year.

Gift giving is one of the oldest customs associated with Christmas: It is actually older than the holiday itself. When the date of Christmas was set to fall in December, it was done at least in part to compete with ancient pagan festivals that occurred about the same time. The Romans, for example, celebrated the Satumalia on December 17th. It was a winter feast of merry-making and gift exchanging. Two weeks later, on the Roman New Year - January 1- houses were decorated with greenery and lights, and gifts were given to children and the poor. As the Germanic tribes of accepted Christianity and began to celebrate Christmas, they also gave gifts.

Ancient, pre-Christian winter festivals used greenery, lights and fires to symbolize life and warmth in the midst of cold and darkness. The use of evergreens and wreaths as symbols of life was an ancient custom of the Egyptians, Chinese and Hebrews, among other groups. Tree worship was a common feature of religion among the Tectonic and Scandinavian people of northern before their conversion to Christianity. They decorated houses and barns with evergreens on New Year's Day to scare away demons, and they often set up trees for the birds in winter. For these northern Europeans, this winter celebration was the happiest time of the year because it signified that the shortest day of the year - somewhere around December 21st - had passed. They knew the days would get longer and brighter. The month during which this festival took place was named YOL, from which the word Yule is derived. In fact, Yule has come to mean Christmas in some countries.

Thus, many Christians do not realize that much of the celebration of Christmas is actually of pagan origin. The Romans celebrated the Feast of the Invincible Sun on December 25th. The early church fathers elected to celebrate the birth of Jesus, may Allah exalt his mention, on this date, although there was no particular reason to choose this one. In fact, many Christian scholars contend that Jesus, may Allah exalt his mention, was actually born in summer. This is consistent with the Quranic account that follows, because there is a specific mention of ripe dates falling to Mary (may Allah be pleased with Her) in the Quran (which means): "And shake towards you the trunk of the palm-tree; It will drop upon you fresh ripe dates." [Quran 19: 25]

A common theme to many Christian holidays is their actual pagan origin. It seems that the early church elders elected to keep many of the celebrations already in practice and redefine them in Christian terms, rationalizing them as a celebration of some aspect of their dogma of the life of Jesus, may Allah exalt his mention. Nowadays, few may remember the reasons for the various customs that they practice.

The fundamental issue for Muslims everywhere is whether or not to celebrate Christmas. Their Christian colleagues may stress the secular aspects of the holiday and need to comply with social customs in order to advance in the society. Many times I have been told to forget Christmas as a religious holiday and just consider it as a social occasion - especially in the . In many businesses in the , it is customary to have a big party for all employees at this time. Failure to participate makes oneself an object of ostracism. One needs to climb the social ladder to optimize one's chances for promotion, etc., and it is difficult to resist the pressure to conform!

Unfortunately, many Westerners feel that we Muslims should celebrate Christmas. They cite the examples of many other non-Christians doing so, including many Jews, Hindus, etc. who join the merrymaking. They find it frustrating that many Muslims will not comply and yield to the social pressure. It is regretful that they do not apply the same standard to themselves. They don't expect us to pressure them to celebrate our holidays nor do we, Muslims, put such pressure on them. After all, we must follow the Quranic verse 2:256 (which means): "There shall be no compulsion in [acceptance of] the religion…" Yet, some feel that it is their duty to try to force their celebrations on us. In fact, I recently heard from some who consider it an insult that we do not celebrate. For this reason, I ask them: "Did Jesus, may Allah exalt his mention, or any of the other prophets celebrate their birthdays?" Then, what authority do they base this on?