Why Do We Muslims Not Celebrate Valentine's Day? 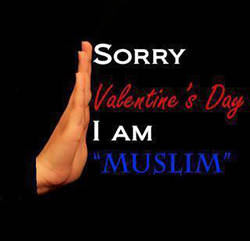 This question may be answered in several ways:

1- In Islam, the festivals are clearly defined and well established, and no additions or subtractions may be accepted. They are an essential part of our worship and there is no room for personal opinion. They have been prescribed for us by Allah and His Messenger

. Ibn Taymiyyah, may Allah have mercy on him, said: "Festivals are part of the laws, clear way and religious ceremonies of which Allah Says (what means): 'To each among you, We have prescribed a law and a clear way' [Quran 5:48] and 'For every nation We have ordained religious ceremonies which they must follow.'" [Quran 22:67]

said: "Every nation has its own ‘Eed and this is our ‘Eed." [Al-Bukhari]

Because Valentine's Day goes back to Roman times, not Islamic times, this means that it is something which belongs exclusively to the Christians, not to Islam, and the Muslims have no share and no part in it. If every nation has its own festivals, as the Prophet

said: "Every nation has its ‘Eed" [Al-Bukhari and Muslim] - then this means that every nation should be distinguished by its festivals.

If the Christians have a festival and the Jews have a festival, which belongs exclusively to them, then no Muslim should join in with them, just as he does not share their religion or their direction of prayer.

Imitating non-Muslims in general -whether they are idolaters or People of the Book - is Haraam (prohibited), whether that imitation is of their worship - which is the most serious form - or of their customs and behavior. This is indicated by the Quran, Sunnah and Ijmaa' (unanimous consensus of scholars):

(i) From the Quran: Allah Says (what means): "And be not as those who divided and differed among themselves after the clear proofs had come to them. It is they for whom there is an awful torment." [Quran 3:105]

(ii) From the Sunnah: the Prophet

said: "Whoever imitates a people is one of them." [Abu Dawood]

Ibn Taymiyyah, may Allah have mercy on him, said: "This Hadeeth (narration) at the very least indicates that it is Haraam to imitate them, although the apparent meaning implies that the one who imitates them is non-Muslim, as Allah Says (what means): 'And if any amongst you takes them friends (and helpers), then surely, he is one of them' [Quran 5:5].”

(iii) With regard to Ijmaa', Ibn Taymiyyah, may Allah have mercy upon, him narrated that there was agreement that it is Haraam to imitate non-Muslims in their festivals at the time of the Prophet’s Companions, may Allah be pleased with them, and Ibn Al-Qayyim

narrated that there was scholarly consensus on this point.

3- The love referred to in this festival ever since the Christians revived it is romantic love outside the framework of marriage. The result of that is the spread of fornication and immorality. Hence, the Christian clergy opposed it at some stage and abolished it, then it came back again.

Some people may wonder, and say: “You mean to deprive us of love, but in this day and age we express our feelings and emotions - what is so wrong with that?”

Firstly: It is a mistake to confuse what they call the day with what the real intentions are behind it. The love referred to on this day is romantic love, taking mistresses and lovers, boyfriends and girlfriends. It is known to be a day of promiscuity and sex for them, with no restraints or restrictions… They are not talking of pure love between a man and his wife or a woman and her husband, or at least they do not distinguish between the legitimate love in the relationship between husband and wife, and the forbidden love of mistresses and lovers. This festival for them is a means for everyone to express love.

Secondly: Expression of feelings and emotions is not a justification for the Muslim to allocate a day for celebration based on his own thoughts and ideas, and to call it a festival, or make it like a festival or ‘Eed. So how about when it is one of the festivals of the non-Muslims?

Thirdly: There is no religion which encourages its followers to love and care for one another more than Islam does. This applies at all times and in all circumstances, not just on one particular day. Indeed, Islam encourages us to express our emotions and love at all times, as the Prophet

said: "If a man loves his brother, let him tell him that he loves him." [Abu Dawood]

Fourthly: Love in Islam is more general and more comprehensive; it is not restricted only to one kind of love, that between a man and a woman. There are many more kinds of love. There is the love of Allah, love of His Messenger

and his companions may Allah be pleased with them, love for good and righteous people, love and support for the religion, love of martyrdom for the Sake of Allah, etc. There are many kinds of love. It is a dangerous mistake to restrict this broad meaning to this one kind of love.

Fifthly: What these people think, that love before marriage is a good thing, is wrong, as has been proven in studies and by real-life experience.

So, how can we believe that Valentine's Day is of any benefit to Muslims? The truth is that it is a call for more permissiveness and immorality, and the forming of forbidden relationships.

The husband who sincerely loves his wife does not need this holiday to remind him of his love. He expresses his love for his wife at all times and on all occasions.