Freedom in Islam and in democracy 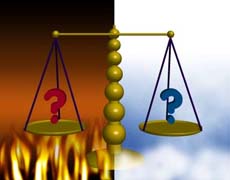 There is no word that nations have called for, spoken about in length, and desired fervently in their hearts more than freedom. People have delivered speeches about it, written books on the subject, composed newspaper columns in support of it, and have raised banners calling for it; they have made it an objective for which all other matters could be sacrificed. On many occasions, people have keenly called for it while being unaware of what they wished to get from it.

This has remained the case until it became the means by which politicians achieved their political aims and personal interests, and used their apparent pursuit of it to attract people’s attention and gain their support. In many cases, this claimed pursuit of freedom has become a means and a justification to destroy any real freedom and wage wars against many nations.

It was made to sound as if democracy is the way to achieve such freedom, because democracy is founded upon freedom; thus the proponents of this ideology have made having a democratic system mandatory for achieving freedom; they argue that one leads to the other, and must exist in order for the other to do so; therefore, one who loves freedom must call for democracy and love it, and vice versa. Such people also claim that, consequently, whoever hates democracy and is an enemy of it is also an enemy of freedom.

The questions that arise here are: does democracy (as practiced by the Western nations) truly achieve the freedom that mankind desires and requires? Does it even raise the level of freedom that people enjoy? What is the type of freedom that democracy achieves for nations, and where are its boundaries? Is an American or a European truly free? Are the lives that they live in their nations ones of freedom, or even partly so?  Does Islam oppose the principle of freedom or does it approve of it and call for it? If Islam does approve of it, then how does it deal with it and expect people to practice it, and what are the permissible types of freedom within Islamic boundaries? Also, is freedom in Islam the same as that in democracy, or are they different? Which one of the two 'freedoms' is more realistic and coincides with the sought freedom, the one in Islam or the one in democracy?

All these questions and many others force one to compare between freedom as Islam presents it and calls for it - how it was practiced under Islamic rule for fourteen hundred years and is still being practiced today, and how freedom is practiced in democratic systems, and how contemporary countries and nations apply it.

This comparison must be made in order to see which of the two is more beneficial, more realistic, more honest and closer to the truth.

The limited human mind is what defined freedom in democracy and decided what is good and what is bad in it according to what its desires and lusts imposed, which entails that freedom in democracy becomes limited at times and broadens at others, depending on what the decision makers feel is beneficial at the time.

This means that the nations who practice such systems become experimental laboratories and are in a state constant flux regarding what is allowed and what is not.

In Islam on the other hand, freedom is clearly defined and its limits and boundaries have been set by Allah alone, who is the infallible Creator of all mankind Whose Qualities are perfect and beyond defect, weakness or incapability. He is All-Knowing of the condition of His creation and Knows best what their requirements are and what suits them.

Thus, freedom in Islam has a distinct feature, which is stability - what was permissible in Islam fourteen hundred years ago remains so until the Day of Resurrection.

In Islam, every person knows what he can and cannot do as well as the areas in which there is room for manoeuvre, according to what Allah has permitted. Furthermore, freedom in Islam is underpinned by ultimate justice and authority because it comes from Allah, contrary to that defined by democracy, which is man-made and therefore fallible and subject to shortcomings and injustice. In democracy, the limits of freedom move within the circle that has been defined by human legislators.

In democracy, freedom is opposed to and conflicts with whatever is defined as evil by human legislators, which, due to their limited knowledge and abilities, entails the inclusion of much evil in the circle of what is good and allowable. It also implies that much good will be included in the circle of the evil and forbidden.

Under democracy, many evil things have been made permissible based on its definition of freedom, but were later found to be immoral and oppressive, which caused them to then be prohibited. Likewise, many matters that were later found to be beneficial were initially prohibited, and this constant fluctuation causes the concept of freedom in democracy to be undermined and belittled.

Conversely, in Islam, freedom is opposed to and conflicts with whatever Allah has defined as evil due to His comprehensive Knowledge and infallibility. Allah has only permitted what is good and beneficial for mankind and has prohibited only that which is evil and dispraised. Consequently, the range of freedom in Islam is only from what is good to what is praiseworthy.

Freedom in democracy only serves to enslave people to one another - people who should in reality be slaves to Allah only; it causes people to be under the control of others who may be lower in status than themselves; those who are in control are the ones who set their rules and forbid and allow them whatever they wish – all that those who are under such control can do is to submit and obey. What type of freedom is this which entails enslavement to other humans?

In Islam, freedom frees man from enslavement to other humans to the comprehensive enslavement to Allah Alone. One might argue that both are forms of enslavement, so what is the difference?

- Allah is the Creator; He provides for man, facilitated the universe for him and guided him to the right path; therefore, Allah alone has the right to be worshipped and man should be grateful to Him and obey His commandments. Worshipping the Creator gives the slave might, honour and dignity, while on the other hand, being enslaved by other humans who are weak and incapable is a form of oppression and punishment.

- Man was created with the natural disposition of being a slave, so if he is not a slave to Allah, then he will certainly become a slave to another human, and this is a false state of affairs, regardless of the form it takes and the status of the human who he is enslaved to.

- Worshipping Allah represents the ultimate freedom because it frees one from being enslaved to other false gods. In democracy, freedom places man under varied types of pressures and external strains that make him lose a great portion of his freedom of thinking and choice.

Examples of these pressures are the media; the pressure of fulfilling his lusts using different means to do so; the pressure of earning provisions, which is one of the greatest that people face; the pressure that politicians and religious leaders place upon people, and how some of these people fabricate and alter facts; the pressure of intoxicants and drugs, which are now widespread; and the latest pressure, which is the threat to anyone who refuses to give in to the instructions that have been set to deal with the phenomenon of 'terrorism,' which is a powerful means of placing great pressure upon people.

The contemporary tyrants do not need to exert much effort to accomplish what they wish from other nations; all they have to do is apply some of these pressures for a short period, and sure enough, other nations usually surrender to their requests. These pressures are referred in the Quran.

Allah Says (what means): “Those who were oppressed will say to those who were arrogant: 'Rather, [it was your] conspiracy of night and day when you were ordering us to disbelieve in Allah and attribute to Him equals.' But they will [all] confide regret when they see the punishment; and We will put shackles on the necks of those who disbelieved. Will they be recompensed except for what they used to do?”  [Quran 34: 33] They plot continuously, day and night, in a way that prevents one from having an opportunity to pause and think correctly in order to be guided to a sound decision.

In Islam, man is freed from all external pressures and effects that may limit or even deprive him from his freedom of choice and decision. Islam frees man from all such pressures.

In democracy, freedom exposes man to all evils, corruption, and everything else that would ruin his good morals and pure nature; it causes him to become inclined towards aggression and abnormality. Its similitude is like that of a person driving a car without brakes who is also negligent of other drivers and pedestrians, therefore, he would slam into others and cause many accidents.

On the other hand, in Islam, freedom is a cause for one to adopt the finest and most courteous morals and behaviour, it does not allow one to transgress in any way and preserves man’s health, faith and thinking; its similitude is like that of one who drives a car with excellent brakes and who stops where he is supposed to and drives only when it is safe to do so.

Freedom in democracy appears as if it is a gift that man gives to another fellow human, and it is as if he has the right to give him as much of it as he desires and whenever it suits him. In Islam however, it is a right that Allah has granted to His slaves, and no human has the right to deprive others from it except for a reason that is legislated by Allah.

The words of ‘Umar, may Allah be pleased with him, clearly reflect this when he said: “Who gave you the right to enslave others when they were born free?”

This is freedom in democracy and in Islam, so which is worthier for the title?

Allah Says (what means): “…And remain on a right course as you are commanded and do not follow their inclinations...” [Quran 26:15]