Turkish PM: Islamophobia should be a crime of humanity 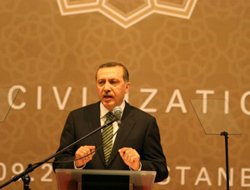 Defining Turkey as not only a geographical but also a cultural, social and political bridge, Erdogan said that Turkey was therefore an important country for the Alliance of Civilizations Initiative.

The Turkish prime minister said on Monday that countries should express their peace and justice demand.
Turkey's Prime Minister Recep Tayyip Erdogan said that countries should express the universal demand of humanity, i.e. the demand for peace and justice, beyond economic and military alliances.
"If we do not take risks for this (ensuring peace and justice) and if we do not try hard, we may leave a very painful world to upcoming generations," Erdogan said during a fast-breaking dinner in Istanbul which was also attended by Spanish Prime Minister Jose Luis Rodriguez Zapatero.
Erdogan said that the humanity was tired of wars, violence and hatred today.
The Turkish premier thanked Zapatero for his support for Turkey's European Union (EU) membership bid.
Erdogan defined Islamophobia as a grave pathological state of mind, and expressed his expectation from members of different civilizations to declare it a crime of humanity.
The prime minister expressed the need to cooperate against not only regional but also global threats, such as terrorism that harmed peace and justice.
"We should eradicate violence, hatred, prejudice, intolerance and fanaticism," Erdogan said.
Erdogan also said that none of the civilizations could underestimate the other, or consider the other an enemy.
"The main mission of the Alliance of Civilizations is trying to understand each other correctly. The basis of cooperation is to understand each other, establish a dialogue without prejudices, and not to exclude the other," Erdogan said.
Erdogan also said that the second forum of the Alliance of Civilizations Initiative would take place in Istanbul on April 2nd-3rd, 2009 and would strengthen the ideal to overcome not only regional crisis but also base international relations on human-oriented policies.
After the fast-breaking dinner, Erdogan and Zapatero had a brief meeting. The Spanish prime minister later departed from Turkey.
PHOTO CAPTION
Turkey's Prime Minister Recep Tayyip Erdogan
Source: worldbulletin.net