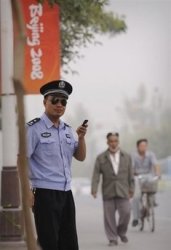 China is preparing to put high-pressure on Uighur Muslims by forcing them to accept identification with the Chinese nation and Chinese culture.

China will conduct a "re-education" drive against Uighur Muslims in East Turkistan with its Party chief vowing preemptive attacks, Reuters said.
Historical records show that the Uyghurs have a history of more than 4000 years. Throughout the history the Uyghurs developed a unique culture and civilization and made remarkable contribution to the civilization of the world.
Wang Lequan, the hardline Communist Party boss, told officials that a sweeping propaganda campaign was needed in East Turkistan, where mostly Muslim Uighurs have suffered under Chinese religious controls, the Xinjiang Daily reported on Wednesday.
Critics of China's policies in the remote region said there would be an official reckoning after the Games, and Wang's fiery words seemed to confirm that prediction.
"We must always maintain a high-pressure strike-hard posture, adhering to a policy of taking the offensive, striking when they show their heads and making preemptive attacks," he told a meeting on Tuesday, according to the report also carried by the China News Service.
"This winter and next spring we will launch a concentrated anti-separatist re-education across the whole region."
East Turkistan has 8 million Uighurs.
The government points to big investments in the region's economy and resources, which include oil and gas, and efforts to lift living standards. But critics say too few decent jobs and benefits flow to Uighurs.
Wang spelt out measures to tie the region more closely to the rest of China and to Communist Party control -- measures that are sure to draw criticism from advocates of an independent "East Turkistan" homeland for Uighurs.
The re-education campaign will seek to enhance "identification with the Chinese nation and Chinese culture", Wang said, adding measures to spread teaching in Mandarin Chinese among Uighur children.
Religious activities must also be carefully policed, he said.
The Uyghurs embraced Islam in 934, during the reign of Satuk Bughra Khan, the Kharahanid ruler. Since that time on the Islam continuously served Uyghurs as the only religion until today.
After embracing Islam the Uyghurs continued to preserve their cultural dominance in Central Asia. World renowned Uyghur scholars emerged, and Uyghur literature flourished. Among the hundreds of important works surviving from this era are the Kutat-ku Bilik by Yusuf Has Hajip (1069-70), Divan-i Lugat-it Turk by Mahmud Kashgari, and Atabetul Hakayik by Ahmet Yukneki.
East Turkistan was occupied by the communist China in 1949 and its name was changed in 1955. The communist China has been exercising a colonial rule over the East Turkistan since then.
PHOTO CAPTION
An ethnic Uighur passes a policeman on August 8 in Xinjiang's famed Silk Road city of Kashgar in northwest China.
Source: Agencies