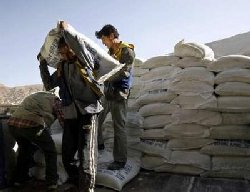 Almost two-thirds of people - 60% - in 26 countries say higher food and energy prices this year have affected them "a great deal", a BBC report has found.

The BBC World Service global study said that while all nations had felt the burden of the higher costs, the problem was most acute in poorer countries.
The Philippines was one of the worst hit of those nations questioned.
Elsewhere, the aid agency Oxfam said more than 900 million people faced starvation because of soaring prices.
A report by the UK-based charity also found that spiraling inflation in the cost of basic foods like rice and cereals had pushed an extra 119 million people into hunger this year.
Since the BBC survey was conducted between 8 July and 15 September, energy prices have fallen back from record highs.
Food costs are also now expected to start to decline, as lower oil and petrol prices mean cheaper fertilizer and reduced distribution costs, among other contributory factors.
Eating less
The study found that many people in the developing world have simply been forced to eat less this year owing to the higher cost of food.
This situation was most acute in the Philippines and Panama, where 63% of respondents said they had cut back on what they eat.
Kenya was the next most affected, with 61% saying they were eating less, followed by Nigeria, at 58%.
Across all 26 countries, 43% of people said they have had altered their diet.
This was most apparent in Panama, with 71% switching to cheaper foods, followed by Egypt, 67%, Kenya, 64%, and again, the Philippines, 63%.
'Unhappy'
In the developing world, 27% of those questioned in Australia said they were now cutting back on what they eat due to higher prices, compared with 25% in the UK, and 10% in Germany.
The survey also showed that 70% of people across the world were "unhappy with what their national government is doing to keep food prices affordable".
Dissatisfaction at a perceived lack of government action to tackle food prices was most apparent in Egypt, where 88% of those questioned said they were unhappy with their leaders, followed by the Philippines, on 86%, and Lebanon, on 85%.
In the developed world, the French respondents were the most dissatisfied with their government, with 79% saying they were unhappy.
Energy woes
Respondents were equally unhappy at higher energy costs, which increased sharply in the first half of this year, but are now falling back.
Some 60% of people across the 26 nations saying they were being affected "a great deal", exactly the same percentage as for higher food costs.
The Philippines was again the worst hit nation, with 96% saying they were being hit a great deal, followed by Egypt on 93%, Indonesia on 84%, Kenya on 83%, and Mexico on 81%.
Majorities in several developed countries also said they were being affected a great deal by higher energy costs - 61% in Italy, 59% in France, and 58% in the US.
Doug Miller, chairman of polling firm GlobeScan, which co-conducted the survey for the BBC, said the problem of higher food and energy bills was being overshadowed by the continuing crisis in the financial sector.
"While governments around the world are now preoccupied with the financial crisis, it is clear that many of their citizens feel they aren't doing enough to relieve the burden of high food prices, which is falling on those who can least afford it," he said.
The Philippines has been particularly affected by higher food prices this year, as with its rapidly growing population and shortage of suitable land for crops, it is the world's largest importer of rice.
Rice prices soared to record highs in the first half of 2008 due to a series of poor harvests that saw major exporters such as Vietnam and India put limits on exports to ensure sufficient supplies for their own populations.
The BBC's economics correspondent, Andrew Walker, said that there were reasons to suppose the food crisis may have eased somewhat.
But for many people it was still the case that food was painfully, even dangerously expensive, said our correspondent.
The survey spoke to 27,319 adults in the following countries - Australia, Brazil, Canada, China, Costa Rica, Egypt, France, Germany, India, Indonesia, Italy, Kenya, Lebanon, Mexico, Nigeria, Pakistan, Panama, Philippines, Poland, Russia, South Korea, Spain, Turkey, UAE, US, and the UK.
It was co-conducted by the Program on International Policy Attitudes.
PHOTO CAPTION
Afghan workers unload a sack of flour at a market in Kabul September 21,2008.
Source: BBC