Asian tsunami 'not the first' 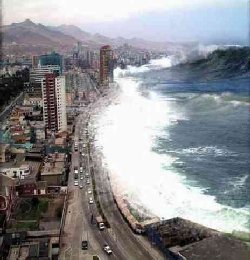 The 2004 Indian Ocean tsunami that devastated large parts of Asia was not the first and will likely not be the last, two separate geological studies have found.

Geologists analyzing rocks in coastal marshes in the region found that a massive wave struck the same area about 700 years ago, the British science magazine Nature reported in its latest edition.
The studies pointed to large deposits of sand washed inland by the ancient waves and preserved under layers of coastal peat.
Scientists behind the study say the findings offer more reason to educate people living along vulnerable coastal regions about the danger from tsunamis.
"Tsunamis are something we never experienced before and after 2004, people thought it was something we would never experience again," Kruawun Jankaew of Thailand's Chulalongkorn University told Reuters.
"But from this, we are able to identify that the place has been hit by a mega tsunami in the past. So even though it is infrequent for this part of the world, it still happens and there is a need to promote tsunami education for coastal peoples."
He said that two more layers of sand were found under the 1400 layer, but more carbon dating studies would be needed before scientists could tell when they were deposited.
Almost a quarter of a million people died in the 2004 tsunami, most of them in the Indonesian province of Aceh, southern Thailand and Sri Lanka.
Many hundreds of thousands more lost their homes and livelihoods.
The deadly wave was triggered by a massive undersea earthquake off the island of Sumatra.
Some analysts blame the massive loss of life of ignorance of the region's tsunami history, because few people living along the affected coasts recognized natural tsunami warning signs.
Such signs include the strong shaking felt in Aceh and the sudden, rapid retreat of the sea that was observed in Thailand.
Many residents of one island off the coast of Aceh are believed to owe their survival in 2004 to the local community's oral history traditions, which have related stories through the generations of a devastating tsunami which hit in 1907.
PHOTO CAPTION
View of Tsunami waves
Source: Aljazeera.net