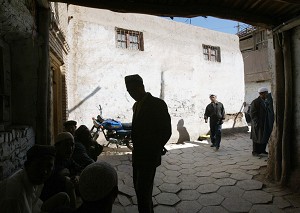 Uighur Muslims, who could not study freely Islamic teachings under the China's long-year restrictions, fear Islamic practices will be forgotten and disappear.

"I wanted to study teachings like the Hadith," the man, 25-year-old Muslim, who identified himself only as Hussein, told San Francisco Chronicle, referring to a collection of the Prophet Muhammad's, sayings. "I'm too old now. It makes me sad."
As children, Hussein and millions of other young Uighurs never attended the religious schools known as madrassas or prayed at mosques because of a government ban on Islamic education for those under 18. Since Hussein never learned about religious laws governing marriage and family, he feels unprepared to have children, and he wonders whether future generations will be able to practice their faith before adulthood.
"Maybe in 10 years, there will be no more religion in East Turkistan, said Hussein.
Since the end of the Olympic Games in late August, the Chinese government's pressure on Uighurs has escalated, according to Alim Seytoff, general secretary of the Uighur American Association, based in Washington, D.C.
Uighurs have long complained of restrictions on Islam, which include studying Arabic only at government schools, banning government workers from practicing Islam and barring imams from teaching religion in private.
The rights groups say in some towns, prayer in public places outside the main mosque is forbidden and an imam's sermon is limited to no longer than a half-hour.
At most major towns in East Turkistan, soldiers search cars and scan identity cards at checkpoints ringing the perimeters.
East Turkistan's Communist Party officials have also curtailed Islamic dress and diet. During Ramadan that ended in September, local authorities required some Uighur-owned restaurants to remain open during the day, when Muslims normally fast. Government employees have been told to shave their beards, and police have been ordering women to remove their veils.
"It's virtually martial law there," said Seytoff of the Uighur American Association. "East Turkestan is a police state. As long you're a Uighur, you're a criminal suspect in China."
Dilshat Rishit, spokesman for the Germany-based World Uighur Congress, estimates that close to 700 people have been detained since August.
"People can be arrested anytime or anywhere without warrants or charges. People are panicking," said Rishit. "These strategies will worsen the conflict between Uighurs and the Beijing government."
Some Uighurs say that even though they worry about security, the growing influence of the Han Chinese over the economy poses a larger threat to their livelihood. A hotel employee in Kashgar named Omar said that most Uighurs experience job discrimination on a regular basis.
"Even if a Uighur knows English, Russian and French, and does a good job, a Chinese will still get the position," he said.
The struggle of Uighurs
The Uighurs are a Sunni Muslim ethnic group related to the Turkic peoples of Central Asia.
Nicholas Bequelin, who monitors the province for Human Rights Watch, says that continued Han migration, rapid economic development and authoritarian rule are a long-term strategy to crush Uighur dissent. Han Chinese now comprise more than half of East Turkistan's population of 20 million people.
"This isn't reactive repression. It's a deliberate policy to control, monitor and sterilize Uighur culture so it can't be a vehicle for autonomy," said Bequelin.
Historical records show that the Uyghurs have a history of more than 4000 years. Throughout the history the Uyghurs developed a unique culture and civilization and made remarkable contribution to the civilization of the world.
The Uyghurs embraced Islam in 934, during the reign of Satuk Bughra Khan, the Kharahanid ruler. Since that time on the Islam continuously served Uyghurs as the only religion until today.
After embracing Islam the Uyghurs continued to preserve their cultural dominance in Central Asia. World renowned Uyghur scholars emerged, and Uyghur literature flourished. Among the hundreds of important works surviving from this era are the Kutat-ku Bilik by Yusuf Has Hajip (1069-70), Divan-i Lugat-it Turk by Mahmud Kashgari, and Atabetul Hakayik by Ahmet Yukneki.
East Turkistan was occupied by the communist China in 1949 and its name was changed in 1955. The communist China has been exercising a colonial rule over the East Turkistan since then.
PHOTO CAPTION
This photo shows Muslim Uighurs in the old quarter of Kashgar of narrow alleys and adobe-style homes, in the far flung outpost of the ancient Silk Road in China's far western Xinjiang Uighur Autonomous Region.
Source: worldbulletin.net