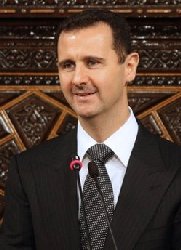 Israel should pursue "talks with Syria next year in return of concessions to weaken Iran and Hamas in the region", an internal Israeli government report says.

Compiled by Prime Minister Ehud Olmert's National Security Council (NSC) and published in part by an Israeli newspaper on Sunday, the report argues for paying the "heavy price" of an accord with Syria -- the return of the occupied Golan Heights.
A senior Israeli official involved in preparing the report said U.S. President-elect Barack Obama should be asked to sponsor the negotiations with Syria, which were revived this year but have been conducted indirectly through Turkey.
"The most important actor for Israeli-Syrian peace talks speaks English, and his name is Obama. Without very positive and significant U.S. involvement, the Syrian track, like the Palestinian track, will go nowhere," the official told Reuters.
"We favor speeding up the talks with Syria, in hope of a breakthrough," the official said, adding that the Golan is not too high a price to pay "if Syria cuts off Hamas and Lebanon's Hezbollah and scales back its ties with Iran."
Syrian President Bashar al-Assad rejects such preconditions.
But Reuters said "some foreign powers brokering his rapprochement with Israel have predicted Syria will be more pliable if an accord is at hand." Assad has also called for a U.S. role in the negotiations.
Obama has backed dialogue with Syria, saying this could better secure Israel along with together deal on Palestinian statehood.
Isolating Hamas
The Israeli NSC report comes in the flux ahead of a Feb. 10 election in which surveys predict a narrow win for right-wing former Prime Minister Benjamin Netanyahu over Olmert's heir-apparent, Foreign Minister Tzipi Livni.
Neither candidate has voiced much appetite for the revival of talks with Syria, which broke down in 2000 over refusal of Israel to withdraw totally from the Golan occupied in 1967.
But with Israel now keen to see Iran isolated over its nuclear program and seeing new border wars in Lebanon with Hezbollah or in the Hamas-run Gaza Strip, Olmert's successor may be forced to accept the NSC's recommendations on Syria.
"I don't think either (Netanyahu or Livni) would stop this track. It's too important," said the senior Israeli official.
The NSC report, as cited by Haaretz newspaper, warns that Abbas could he might "disappear" from the political arena and due to this possibility and that Hamas might win a new election, urges Israel to "prevent an election in the Palestinian Authority, even if a confrontation with the United States and the international community".
The paper also says continued Israeli pressure on Hamas to isolate and weaken it, along with bolstering alternatives to it. "If the truce collapses and conflict is resumed in the Gaza Strip, Israel must act to topple Hamas' rule there," it says.
Israel, which is assumed to have the Middle East's only atomic arsenal, has hinted it could attack Iran.
"There is now a 9-month window for stepping up the sanctions and getting real results," the Israeli official said, citing intelligence assessments on progress in Iranian uranium enrichment and its vulnerability to the current economic crisis.
PHOTO CAPTION
Syrian President Bashar al-Assad.
Source: Reuters