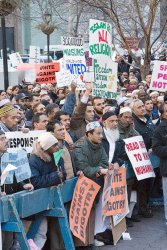 Hate crimes against Arab Americans have decreased steadily since the Sept. 11 attacks but are still more common than they were before the hijackings, a civil rights group said on Thursday.

The American-Arab Anti-Discrimination Committee said it received an average of 120 to 130 reports of ethnically motivated attacks or threats each year between 2003 and 2007, a sharp decrease from the 700 violent incidents it documented in the weeks following the 2001 attacks.
But that figure is still higher than the 80 to 90 reports it received in the late 1990s, the civil rights group said.
Incidents tended to increase after other attacks, such as the 2005 London subway bombings, the group said.
Many incidents did not begin with a clear motivation of bias, but assailants would use racial or ethnic slurs as the situation intensified, the group said.
Incidents range from harassment and vandalism by neighbors to death threats from co-workers. One Arab American man in Alabama was shot by a customer who had been yelling racial slurs at a Middle Eastern restaurant in 2006, the group said.
There are roughly 3.5 million people with Arab roots in the United States, slightly more than 1 percent of the population.
PHOTO CAPTION
American Muslims
Source: Reuters