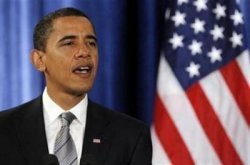 President-elect Barack Obama plans to offer Israel a strategic pact designed to fend off any nuclear attack on the Jewish state by Iran, an Israeli newspaper reported on Thursday.

Quoting an unnamed American source close to Obama, Haaretz daily said Obama's administration would pledge under the proposed "nuclear umbrella" to respond to any Iranian nuclear strike against Israel with a U.S. retaliation in kind. The U.S. embassy in Tel Aviv had no immediate comment.
Asked about the report, an Israeli government official said only: "We do not engage in speculation whose source is unclear."
Iran denies its nuclear program has military designs. But virulent anti-Israel rhetoric from Tehran has spread fears that the Israelis, who are believed to have the Middle East's only atomic arsenal, could attack their arch-foe pre-emptively.
The latitude for unilateral Israeli action might be limited by a U.S. nuclear umbrella. Similar Cold War treaties -- NATO in Europe, the nuclear umbrella over Japan -- defended U.S. allies while obliging them to get Washington's nod for military moves.
Speculation on the possibility of a U.S.-Israeli strategic pact was stirred two years ago, when President George W. Bush said in an interview with Reuters that his country would "rise to Israel's defense" in the face of Iranian threats.
PHOTO CAPTION
President-elect Barack Obama
Source: Reuters