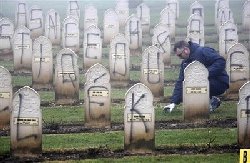 French President Nicolas Sarkozy joined Muslim groups on Sunday in condemning attackers who set fire to a mosque in a Lyon suburb, and hundreds gathered outside the building to protest against racism and Islamophobia.

The fire at the mosque in the Lyon suburb of Saint-Priest was started early on Saturday before morning prayers and caused damage to the entrance, walls and religious books before being put out.
Worshippers arriving for morning prayers put out the flames before the fire brigade arrived.
"The culprits wanted to set fire to the whole mosque," said Kamel Kabtane, head of Lyon's Grand Mosque.
Sarkozy denounced the shameful and racist incident and called for the perpetrators to be found quickly and punished.
Islamic groups and politicians condemned the attack as a despicable and criminal act.
Organizers of the demonstration said "this mobilization shows the will of the Muslim community not to accept being treated in this way any longer and to respond each time," Kamel Kabtane, head of Lyon's Grand Mosque.
Azzedine Gacci, president of the Muslim regional council, said there had been some 10 Islamophobic acts in the last two years and called for a national demonstration by all religions and for Islamophobia to be condemned alongside anti-Semitism and racism.
Police were investigating the fire but had not yet found who was responsible, Interior Minister Michele Alliot-Marie said.
Hundreds of tombstones in the Muslim part of a military cemetery near the northern French town of Arras were damaged earlier this month in the third such attack on the site in less than two years.
PHOTO CAPTION
An investigator works through desecrated tombs in the Muslim section of the Notre-Dame-de-Lorette military cemetery near Arras, northern France, Monday Dec. 8, 2008.
Source: Agencies