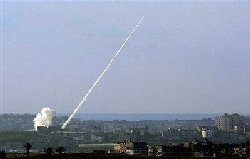 When George Bush, the US president, first entered the White House as the commander-in-chief in 2001, Palestinians were being killed in the al-Aqsa intifada.